JANE GOT A GUN Given America’s ongoing gun crisis related to daily mass shootings (many occurring in cinemas), this film’s provocative title gives more than a little reason for pause.

Perhaps all too unsurprisingly, “Jane Got a Gun” fulfills its title-hinted expectation of an exploitation western romance picture with barely a hint of any post-modern-proto-feminist intent that mature viewers might hope for.

The film is less a blend of genres than one big mess. 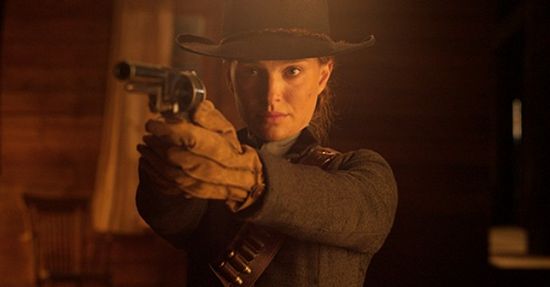 Natalie Portman’s title as producer leads to some head scratching about why an actress of her caliber and influence would choose such a sub-par melodrama populated by cartoon villains.

The wobbly script (by Brian Duffield, Anthony Tambakis, and Joel Edgerton) gets the better of the otherwise reliable director Gavin O’Connor (“Miracle”), who seems content to take home a paycheck for a movie he won’t be putting on his resume. It’s notable that director Lynne Ramsay (“Morvern Callar”) unceremoniously walked off the film just days into its 2013 production, taking several crew and cast members with her.

Intermittent flashbacks take the audience out of the action to make room for Ewan McGregor’s generic mustachioed villain Colin McCann. The only thing missing is a clip of Colin McCann tying Jane to a railroad track. Jane’s troubled past connection to McCann pretends to pass for motivation in a movie doesn’t know where to shoot.