« THE BRAINWASHING OF MY DAD | Main | DEADPOOL » 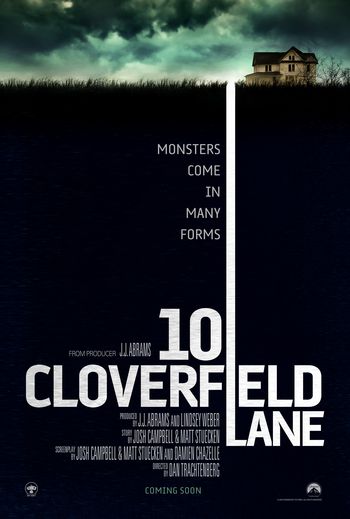 Dan Trachtenberg’s low-budget suspense thriller is one big plot hole. Don’t believe the hype implied by its relatively high score on RottenTomatoes, “Cloverfield 10” is an underdeveloped post apocalyptic dud. Talk about a movie with no personality, this thematically indigent picture doesn’t have any ethical center, much less any political satire to speak of. Think of it as “Panic Room” without the panic.

Girl-next-door-type Michelle (Mary Elizabeth Winstead) has just broken up with her boyfriend as she drives at night through rural Louisiana. Michelle loses control of her car and crashes down the side of a ravine. She awakens in an empty, locked, cinderblock room strung up to a bag of intravenous fluid. She is locked at the knee to the wall just in case there was any confusion about her status as a hostage or prisoner. In walks Howard (John Goodman), a conspiracy-theorist prepper whose time has arrived. Howard informs Michelle of her safety inside his underground bunker since he saved her life after he found her wrecked car. According to Howard, everyone above ground has been killed. The air is toxic. Aliens are everywhere.

Naturally, Michelle tries everything she can to escape, but Howard lets her off the hook easily considering how many times she tries some shenanigans. She certainly gets treated better than the bunker’s third wheel Emmett (played by John Gallagher Jr. looking and sounding suspiciously like Dane Cook). Emmett doesn’t know Howard very well even though he spent a few years helping Howard build the bunker before begging to live there with Howard. Nothing adds up.

The overbearing Howard instructs his confined guests that there is to be no touching, as if that would be enough warning for two hot-blooded youngsters to keep their hands off one another while trapped inside roughly 1000 square feet. The screenwriters could have at least included spit swapping. But this isn’t that kind of movie. It isn’t any kind of movie. Howard seems to have a criminal past involving the disappearance of at least one woman, but he’s not much of pervert around Michelle. He’s too much of a pussycat to give the movie the menace and unpredictability it needs.

If all suspense thrillers were this boring, audiences would stop going to see them. The worst thing about “Cloverfield 10” is that a lowest common denominator phenomenon has occurred in the hive-mind of critics bending over backwards to champion this indefensible turd. Don’t say I didn’t warn you.