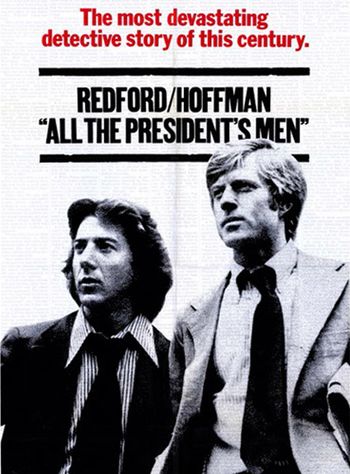 This 1976 Alan J. Pakula-directed picture is a high wire journalistic procedural with political thriller underpinnings, which began production while the Watergate scandal was still unspooling toward President Nixon’s 1974 resignation.

Washington D.C. is nothing if not an architecturally imposing urban zone teeming with government spooks playing carefully coded games of corrupt political persuasion. It seems as though anyone wearing a suit carries a badge of some government stripe that ostensibly puts them beyond the law. “Godfather” cinematographer Gordon Willis’s largely nocturnal framing of D.C. captures a sense of fear and foreboding. Every inky shadow holds a potential unknown threat.

Pakula fetishizes America’s now-defunct newsroom culture that once promised to keep America’s political process honest, if not accountable. Never before had a movie taken such a daring approach to dramatizing the grunt work of journalists whose painstaking process could seem objectively tedious.

Based on the 1974 book of the same title (by Carl Bernstein and Bob Woodward) no minuscule detail of the Washington Post’s vast florescent-lit news office goes unchecked. You can almost smell the ink coming off of the Teletype machine that legendary screenwriter William Goldman uses to expositional advantage during the film’s visually stark coda.

Hundreds of thousands of dollars of misappropriated campaign contributions to Richard Nixon’s Committee to Re-elect the President (CREEP, the best acronym ever), is the key to what was then the biggest conspiracy in American political history. This is where the term, “follow the money” comes from. 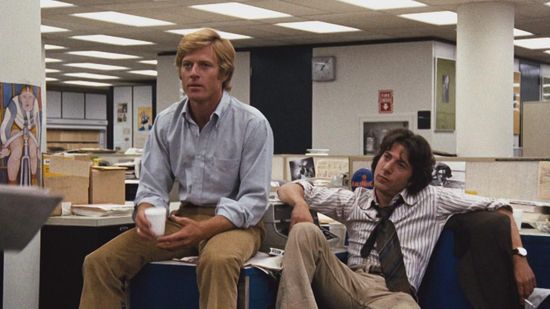 Dustin Hoffman’s big-haired portrayal is a catlike creation with fast-twitch reflexes for quizzing his suspicious prey. The physically expressive Hoffman sits with the hip casualness of a spry high school athlete announcing his virility with exaggerated poses that teeter on vulgar.

Perhaps the most fascinating aspect of the Watergate scandal is how quickly the rightwing were able to not only recover from it, but to legalize their ever-expanding methods of political skullduggery. You need only to look at the Conservative Political Action (CPAC) to see how far in reverse America has come since the days when such political overreach forced a president to resign. Colossal scandals, such as the NSA surveillance program, reveal an utter lack of accountability in a modern era where rightwing think tanks and billionaires (such as Rupert Murdoch) have turned American media into a 24/7 propaganda machine.

“All The President’s Men” is a reminder of a simpler time before the internet-of-things drained all value from our lives. There once was a thing known as newspaper journalism; it was effective as it was work intensive for two reporters from opposite ideologies who worked together to tell the truth about the “rat-fuckers” who now rule the roost. 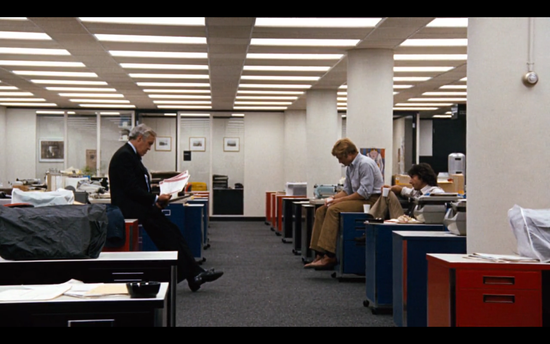 Posted by Cole Smithey at 11:45:21 PM in Political Thriller