Cannes, France — At the Friday morning Cannes press screening of "The Last Face" it was clear from a cheesy opening scroll, about the profoundness of “love between a man and a woman,” that the next 131 minutes would be spent in filmic embarrassment if not utter hell. “The Last Face” is a painful movie, on so many levels, to watch. Naturally, there is voice-over narration to bring down heavy-handed messages of wartime experience vis-a-vis as a burden to the Western world, i.e. rich white people. I wish I’d used my time to see a different film at Cannes.

The oh-so reckless romance that occurs between relief-aid doctors Wren Petersen (a rich girl daughter of political influence played by Charlize Theron), and Javier Bardem’s super-suave doctor Miguel Leon, does so against a fiercely violent area in Liberia where human slaughter is de rigueur.

Crammed with incredibly gory sequences of bodies (dead and alive) mutilated and cut open by war, “The Last Face” is an exploitation movie with a romantic infection. It’s a feel-good-about-feeling-bad movie. Could there be anything worse? I suppose a snuff film would be worse.

The trite sentimentalized theme that comes through Penn’s drawn out overly-cinematic ordeal is that regardless of how much the fearless white man or woman helps the pathetic black man, it still isn’t a drop in the bucket toward reducing the violence because Liberians be crazy violent by nature.

By centering the story on a love triangle between saintly-not-saintly white martyrs (Adele Exarchopoulos has a recurring cameo as the third wheel), Penn paints himself into a corner. This is a movie that was doomed before it ever went into production. 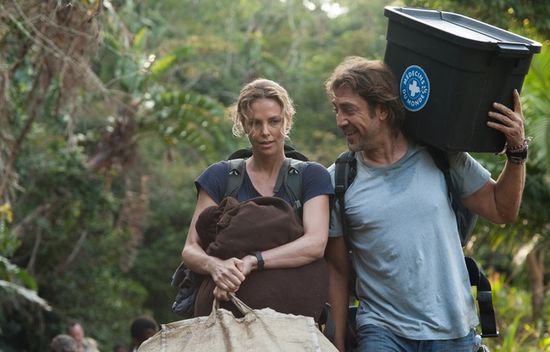 Near the end of the story, Wren gives an ostensibly rousing (more like vomit-inducing) speech at a fancy fundraising dinner for NATO. She emphasizes that even more than the money her investor audience gives, that it is their “passion” that is supremely important. If that doesn’t sound like a crock of bullshit, I don’t know what does.

The biggest problem with the character aspects of the film is that we don’t care about these narcissistic people because we shouldn’t. If ever there was a movie that could make you dislike relief-aid doctors, “The Last Face” is it.

Oh, and what an awful title for a movie.