TONY ROBBINS: I AM NOT YOUR GURU 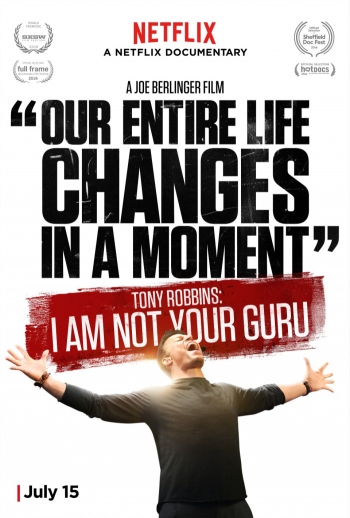 Netflix audiences may bring a slew of casually-acquired preconceptions to Joe Berlinger’s Kool-Aid-consumed documentary about “life performance coach” extraordinaire Tony Robbins. The film covers Robbins’s six-day “Date With Destiny” self-help seminar in Boca Raton, Florida. Though this doc initially comes across like a puff piece by the usually more rigorous Berlinger (see “Whitey: United States of America v. James J. Bulger"), the film effectively reveals what goes on at Robbins’s retreats. You probably won’t pick up any shocking life-hack secrets you didn’t already know from listening to your favorite podcast series, but you will get a charge from the infectious energy on display. Tony Robbins is a monster ball of vim and vigor. Paul Verhoeven and Werner Herzog look out.

Famous (or infamous) for his ubiquitous self-help infomercials and celebrity status (for coaching celebs like Oprah, Princess Diana and Nelson Mandela), Tony Robbins puts his outsized personality to use with a 2,500-large crowd of attendees. Years of delivering such impassioned talks has blown out Robbins’s voice to a rasp. With his giant 6’4” frame, the square-jawed Robins delivers his hyper-caring brand of pop psychology. He wants to end suffering for any human being he can. He considers his subjects’ biggest problem to be that they “think they shouldn’t have them [problems].”

A handful of the anxious searchers in the packed audience get to enjoy a one-on-one session with the master in front of the whole group. Staff team leaders perform emotional triage to advance [possibly suicidal] attendees for top priority attention during the sessions.

Robbins’s impressive interactions with such audience members prompt some dramatic results. Still, you can’t help but feel like you’re witnessing a parlor trick. The format is clear; by tackling especially difficult cases Robbins rescues people in dire need of a strategy to get through whatever landmine-loaded reality they endure on an immediate basis. Urgency is a factor. 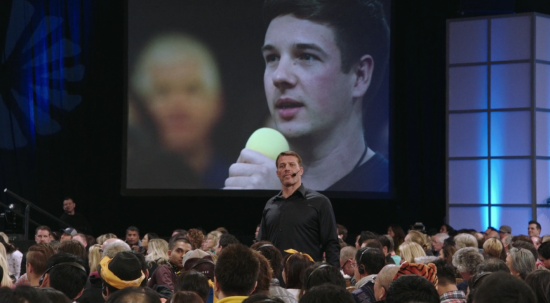 This town hall setting allows Robbins to infuse a new-agey rock ’n’ roll atmosphere (with the help of a high-tech production design and music).

Everyone here paid the seminar’s $5,000 fee. While that's a lot of bread, it’s still a fraction of what you would spend on a drug rehab program.

Tony Robbins appears to be a well-intentioned and effective force of nature. Early into the film we witness a conversation between Robbins and a twentysomething Euro kid with suicidal thoughts. Robbins uses dialectic jujitsu to disarm the young man by insulting the kid’s red tennis shoes. 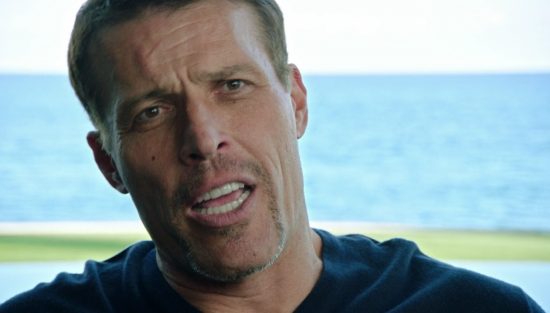 His methods and career, based on lessons Robbins learned from the late motivational speaker Jim Rohn and from his involvement in John Grinder’s NLP (neurolinguistic programming) are that of a self-made-man whose force of will takes no prisoners. The culty aspects of the retreat are mitigated by the openness that Robbins exhibits throughout the week. Tony Robbins isn’t a guru; he just plays one in your mind.

Posted by Cole Smithey at 07:57:32 PM in Documentary, Netflix