FLESH FOR FRANKENSTEIN — THE CRITERION COLLECTION 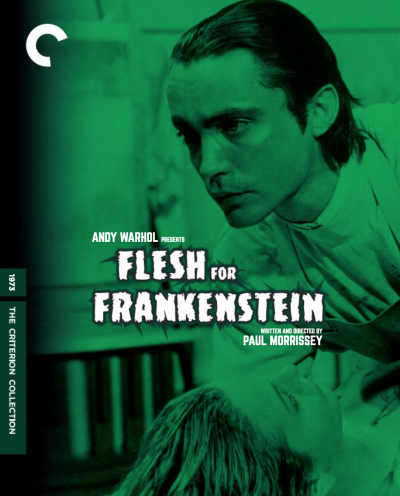 Commonly referred to as “Andy Warhol’s Frankenstein” (what on Earth could be better?), Paul Morrissey directed “Flesh for Frankenstein” with a dry camp sensibility that he exploits hilariously, and relentlessly, for truly inspired gory (and nude) episodes of Grand Guignol exaltation.

Makeup wiz Carlo Rambaldi (“Alien”) has a field day. Most significant in this gruesome parade is its premeditated use of the Space-Vision 3D process to allow disemboweled organs to dangle in front of audience’s noses. If this movie ever comes to your neighborhood in 3D, don’t miss it. It may well be the best use ever made of the stereoscopic process. The ratings board gave this movie an X rating for a reason.

Morrissey co-wrote the Hammer-inspired horror movie with two uncredited screenwriters (Tonino Guerra – “Blowup” and Pat Hackett). The movie is all about the set-up, style, and tone. If the dialogue seems atrociously stiff, that is the intention. Baron von Frankenstein (exquisitely played for hammy effect by Udo Kier) shares his remote castle with his nymphomaniac wife/sister Katrin (Monique van Vooren). Katrin’s pre-pubescent son and daughter secretly follow in Dr. Frankenstein’s footprints. With his submissive servant Otto (Arno Juerging) beside him, and hair slicked back in a Dracula-inspired style, the good doctor likes to stick it in the surgically opened gallbladder of his not-yet-alive female creation. Cue the 3D effects.

Udo Kier delivers the film’s money line when he categorically states, “to know death Otto, you have to fuck life in the gallbladder.” Hilarious.

Dr. Frankenstein goes on about creating life that represents Serbian ideals that “comes from the ancient Greeks” built of a head with the right “nasum” (nose).

Joe Dallesandro (“Little Joe” of Lou Reed’s “Take a Walk on the Wild Side” fame) steals the movie as Nicholas, the castle stable boy (a.k.a. stud) who Lady Katrin seduces and claims as her own. Dallesandro’s Brooklyn accent and physical bearing brings an intriguing undercurrent of global cross-pollination in the film’s European environs. Martin Scorsese followed in this film’s footsteps when he made “The Last Temptation of Christ” in 1988.

Other filmmakers also stole from “Flesh For Frankenstein.”

David Cronenberg clearly took inspiration from this movie for “Videodrome” and eXistenZ. There is also no question that this deeply satisfying picture informed the set design and comic tone for “The Rocky Horror Picture Show,” which also took its ideas from Peter Perry Jr.’s “Kiss Me Quick!” (1964). 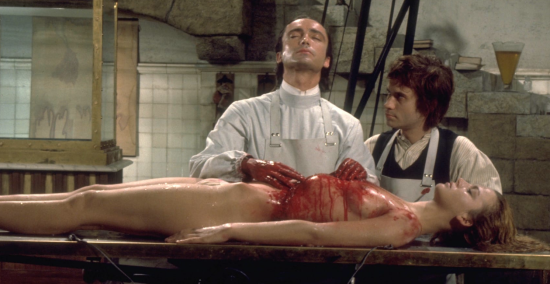 “Andy Warhol's Flesh For Frankenstein” is a riot. Even its closing tableau is socially transcendent, and transgressive. The movie periodically achieves its operatic aspirations. It also happens to be one of the most gloriously gross and sexy horror movies you’ll ever see. Oh what sublime joy.