« BATTLE OF THE SEXES | Main | THE ANDERSON TAPES » 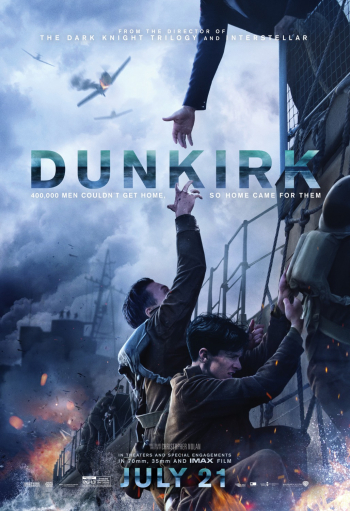 At best, Christopher Nolan is a barely competent filmmaker. Still, he is far from being an adept storyteller, much less a great director. Not only is Nolan’s “Dunkirk” far from the “masterpiece” that every phony bandwagon-jumping “film critic” pretends it is, the movie is one of the worst war films ever made. Here is a cinematic peanut butter and jelly sandwich made with creamy p.b. and a ton of jelly so that it won’t stick in your throat. You’ll be reaching for a glass of milk rather than the stiff drink that you would be thirsty for if this war movie were any good. Let's be clear, this movie sucks.

Search all you want, there isn’t a protagonist to be found in "Dunkirk." There isn’t even an enemy. All we see of the faceless German troops is the exteriors of their warplanes. Talk about half-assed screenwriting, “Dunkirk” exists in a filmic bubble the size of your fingernail.

Hans Zimmer’s relentless music pounds the film with 120 beats-per-minute of aural hamburger-helper; you may as well wear a blindfold, you’ll get the gist of every scene I promise. Nolan clearly knew he was in trouble deep that he needed to mask the film’s weaknesses with so much musical bombast. I can still hear Zimmer's pedantic music ringing in my ears.

Screenwriter Nolan splits up his jumbled film into three parallel plotlines twisted to represent the battle of Dunkirk from perspectives of the land, sea, and air. Nolan only names three of plotlines although there’s an extra thrown in for additional uncertainty. Most confusing is the fact that each plotline takes up a different amount of time, ranging from a single hour to one day, to one week. Christopher Nolan’s faulty foundation for “Dunkirk” is doomed to be taught in film schools for decades as an example of what not to do. 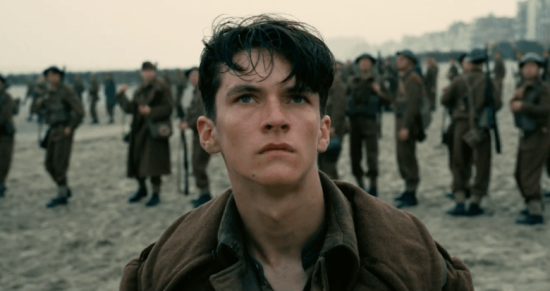 There’s “The Mole” plotline about Tommy, a young British soldier who we are led to believe is mute because he doesn’t utter a single word for the first half of the movie. While taking a dump on a French beach, Tommy meets Gibson, a similarly mute soldier busy burying a fellow soldier in a shallow grave of sand. The “mole” refers to the wood and stone pier that Tommy and Gibson traverse in order to board a U-boat (while opportunistically carrying a wounded soldier on a stretcher) that they hope will take them to safety from the gathered masses of German troops who have 30,000 soldiers backed onto the beach.

From the pier, Royal Navy Commander Bolton (Kenneth Branagh) mumbles dialogue as though he has marbles in his mouth along with Colonel Winnant (James D’Arcy) who seems to have even more marbles in his own maw. Christopher Nolan clearly didn’t care too much about the dialogue in these scenes since the audience will barely catch a word of it.

Another story thread follows fighter pilot squadron leader Farrier (Tom Hardy) running low on fuel as he dogfights German “bandits” in the skies over the English Channel. There are two other fighters in Farrier’s squadron, but their subplots are so glossed over, you’ll barely notice they’re there. One thing you get is that Christopher Nolan has a fetish for making Tom Hardy act from behind a mask. “You’re not eating enough strawberries.” 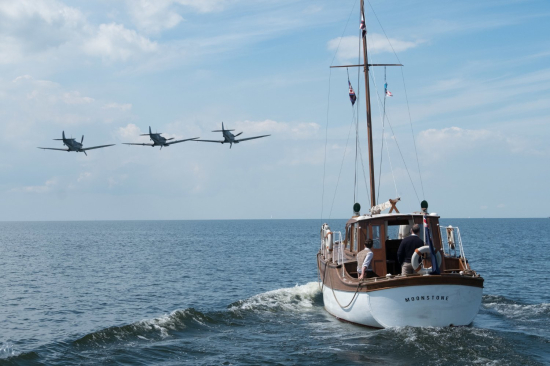 The “sea” aspect of the narrative follows the adventures of a British dad traveling on his family boat with his two teenaged sons in an attempt to rescue soldiers from the French beach. Their rescue of a British soldier played by Cillian Murphy backfires when the shell-shocked soldier flips out because he doesn’t want to be taken back into the line of fire. The subplot does allow for the film’s best performance from the ever-reliable Cillian Murphy.

Nolan's most egregious sin arrives as an anticlimactic punchline to his supposed "fact-based" story when roughly a dozen small craft boats "rescue" a fraction of the 30,000 soldiers stranded on the French beach. I wonder what the other 29,920 doomed soldiers would have thought of Nolan's rendition of Dunkirk.

As for as the lack of filmmaking technique on hand, all you need do is compare any scene from “Dunkirk” against any scene from a film made by Polanski, Kurosawa, Hitchcock, Klimov, Linklater, or Tarantino to discover the blatant weaknesses in Nolan’s uninspired, and unschooled, approach to composition and atmosphere. Nolan wouldn’t know an “axial cut” from a hole in the ground. To pretend that Christopher Nolan is a filmmaker of any consequence is pure folly. Not only does Nolan not know where to put the camera, he hasn’t a clue about what to show and what not to show. There simply isn’t any logic or continuity to his use of filmic language.

All war films should be anti-war films by definition. If you take Elem Klimov’s bar-setting “Come and See,” for example, you’ll see what I mean.

“Dunkirk” seems to say that there are no heroes in war, only victims, suckers, survivors, and assholes. Perhaps Christopher Nolan’s movie has a point after all.