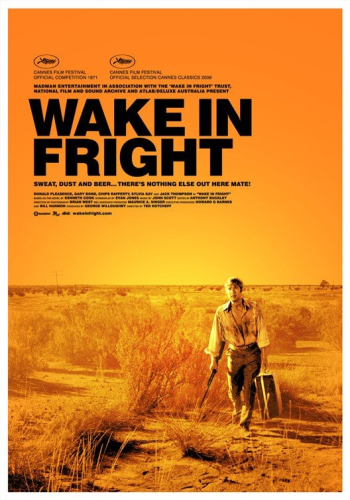 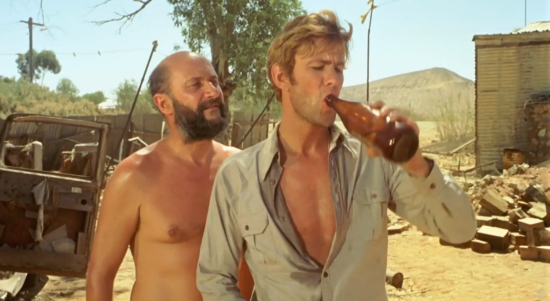 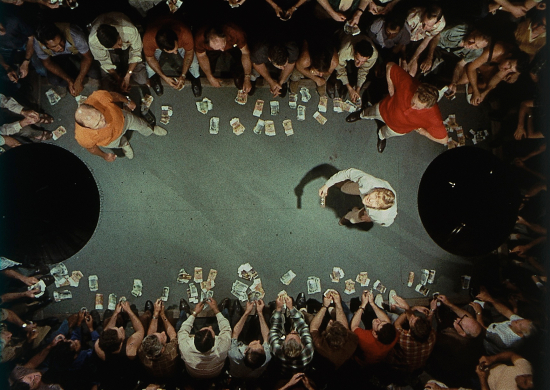 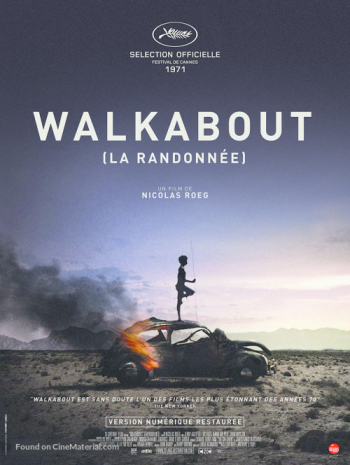 After sharing directing duties with Donald Cammell in 1970, on the groundbreaking experimental film "Performance" (starring Mick Jagger), Nicolas Roeg began an exceptionally fruitful career as a filmmaker with a singularly unique approach to cinematic storytelling.

Based loosely on a novel by James Vance Marshall, Roeg's first solo effort is a complex treatise on ecology, racism, and a culture clash between primitive man and his industrially-bound white neighbors. Roeg employs an unsettling sonic landscape of radio-wave aural stimulus to underscore the harsh juxtaposition between modern technology and the sounds of the natural world. Noisy transistor radio squeals and beeps screech in a harmonic disruption to the sounds of birds and buzzing insects. 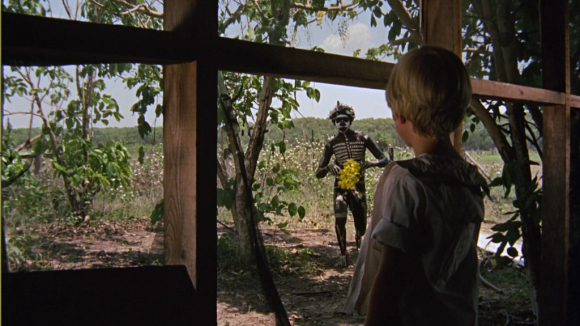 A wealthy Australian businessman takes his 14-year-old daughter and six-year-old son into the parched Outback for a picnic. The children are dressed in their private school uniforms. The superficially successful father drives the siblings in his black Volkswagen bug until it runs out of gas in the desert. As the lanky daughter sets food out on a scarf, a portable radio provides a pop music soundtrack. Her six-year-old brother plays on a cluster of rocks. After viewing them through binoculars, the father takes out a pistol and fires on his offspring. They flee. He sets the car on fire and blows out his brains. Thus begins our desperate tale of familial survival. 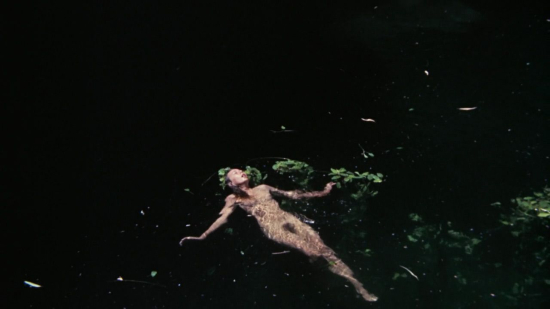 The freshly minted refugee siblings begin a journey for subsistence that mirrors the "walkabout" tradition of a 16-year-old Aborigine boy they meet along the way. He lives alone, off of the land, just as his tribal ancestors have done for thousands of years. He will rescue the boy and girl from a terrible fate. The favor will not be returned. Quite the opposite. 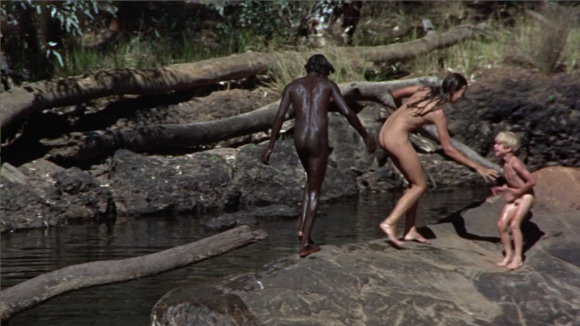 The camera's frame of reference also provides a hallucinatory vantage point. A brick wall that covers the entire screen can obscure a busy street or reveal a wide-open desert terrain. Roeg’s carefully planned use of juxtaposition flavors every scene. Memories flash in still frames to form a fragmented collage structure. Time can stop. Transparent camels from the past walk across the desert, their depleted carcasses are there too. 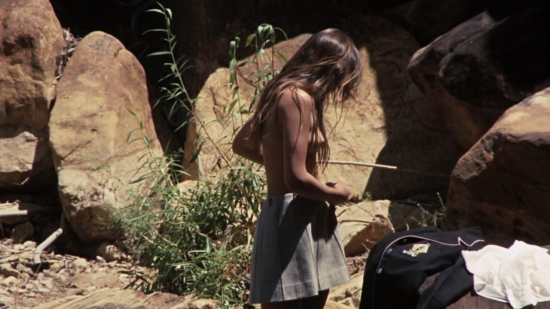 The long-limbed Aborigine boy (David Gulpilil) wears only a small loincloth. The pubescent girl wears a short gray skirt and a white schoolgirl blouse. The native boy’s skin is dark and yet immune to the unrelenting sun, while the Caucasian girl’s pale flesh burns and blisters. The sexual tension that enflames between them is diffused by their inability to communicate through language. He speaks from the heart in his native tongue. She speaks in a British accent that stresses strict codes of behavior she has learned by rote in private schools. Her younger brother carries two spears that he uses to kill the lizards, kangaroo, and buffalo, which he learns to cook. The pair adapt well under their black guide’s assistance. 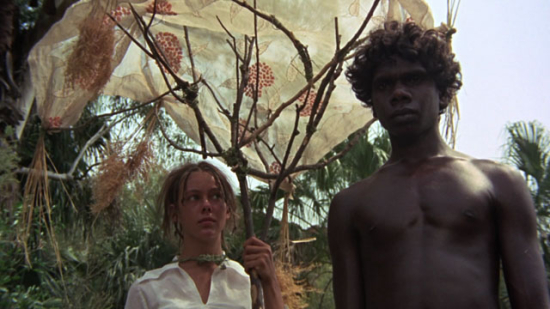 "Walkabout" is a poetic film that incorporates a collective subconscious of humanitarian values. It reveals those mores being broken just as politicians, corporations, and local exploiters of every stripe smash them daily in every corner of the globe. This haunting film is a tragedy regarding imperialism, capitalism, and racism. You won’t forget “Walkabout.” See it on a big screen. 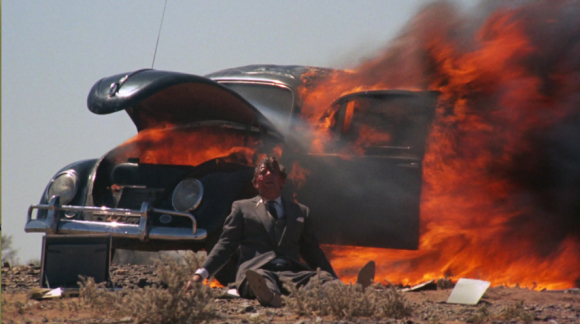 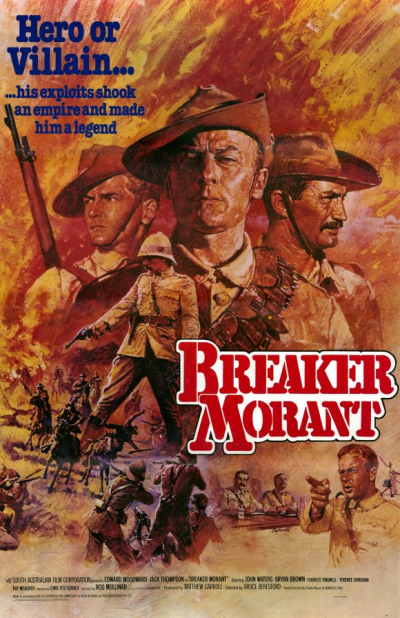 Bruce Beresford's exceptional turn-of-the-century wartime [courtroom] drama is a thought-provoking examination of British-led military events that occurred during the Boer War (1899-1902) in South Africa. The war-based narrative follows the fate of three court-martialed Australian soldiers fighting for the British Empire against a Dutch community of South Africans known as Boers.

British forces occupy most of the Boer territory. In order to defeat the Boers' efficient guerrilla tactics, the British form an elite brigade known as the Bushveldt Carbineers. The skeletal troop is made up largely of Australian soldiers like lieutenants Harry "Breaker" Morant (Edward Woodward), Peter Handcock (Bryan Brown), and George Witton (Lewis Fitz-Garfield), the very three men standing trial in a military courtroom forum with nothing resembling due process. These men embody scapegoats being led to slaughter.

Nicknamed "Breaker" for his horse-breaking skills, lieutenant Morant (Woodward) is an experienced soldier and a keen poet. The murder and mutilation of his troop's beloved Captain Hunt by Boer fighters sends Morant into a fitful rage. Under orders from Britain's Lord Kitchener, that Boer soldiers be killed rather than taken prisoner, Morant orders the firing-squad killing of a Boer guerrilla caught wearing the khaki uniform of his deceased captain. The order makes up the court's primary accusation, along with an allegation concerning the murder of a German priest as a bit of damning insurance for the prosecution’s case. 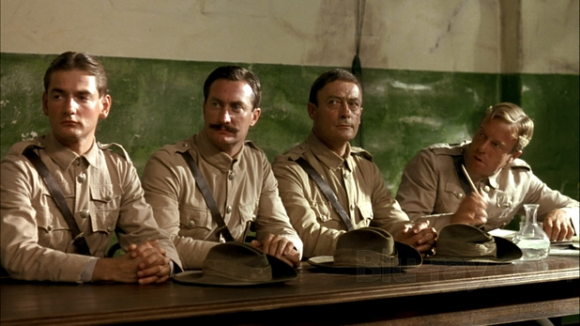 Beresford's elegant use of long-shot compositions provides a concise scale for the untamed landscape of the region. A quaint stone fort prison and courthouse serves as an arid stage for the mangled legal proceedings that give way to haunting flashback sequences that constitute the bulk of the film.

Major J.F. Thomas (Jack Thompson) is the inexperienced attorney assigned on short notice to defend the three accused men. Their position as stooges for the British Army becomes increasingly clear. British military chiefs use the trial as a public relations ploy toward ending their military occupation and letting themselves off a hook that could eventually ensnare them. 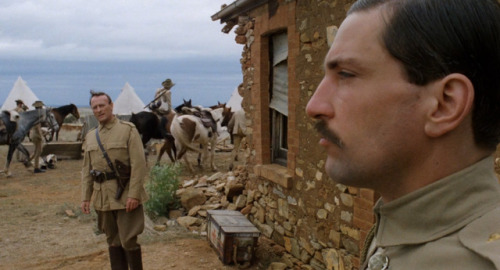 Pressure from German forces threatening to aid the Boer community is a concern. "This is what comes of empire-building."

"Breaker Morant" is an effective anti-war film that shows multiple sides of the dubious conflict in question. It is also a trenchant character study of men trapped in a corrupt system. There are no good-guys in this sad tale of war, but plenty of tragic consequences. 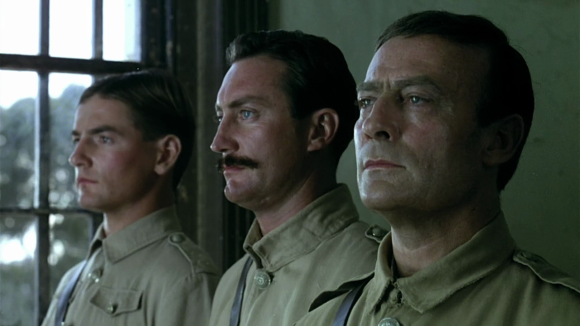