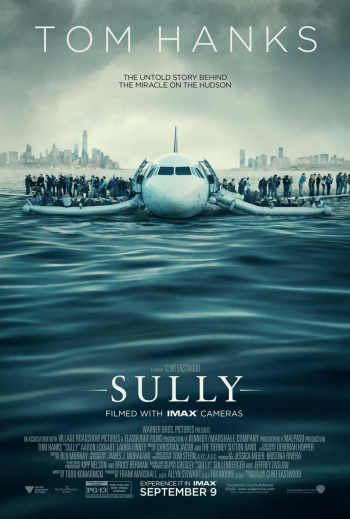 It’s more like watching a funeral, than witnessing one of the most spectacular lifesaving events in recent memory. Perhaps most troubling is Eastwood’s (possibly subconscious) inclination toward celebrating white people for the sake of their whiteness.

If historic Caucasian pap is your thing, then this movie is for you. You can count the number of people with brown skin in this film on one hand. More to that point, the film’s dramatic arc crescendos on Sully and his co-pilot Jeff Skiles (Aaron Eckhart) agreeing that they “did their job.” If you’re looking for a low thematic bar to hurdle, we’ve go a ringer here. Tom Hanks plays Capt. Chesley Sullenberger, the stoic pilot who crash-landed his US Airways plane on Manhattan's Hudson River after a bird strike took out both engines. Hanks’s performance might be true the human model he represents but we don’t get much, if any insight, into what makes Sully tick. He’s an underpaid career pilot whose vast experience, flying many thousands of hours, allowed him to make critical decisions in split seconds that saved the lives of everyone aboard his plane. We already knew that.

This film doesn’t explain much that most of our collective American conscious doesn’t already know, other than how flight simulators work. 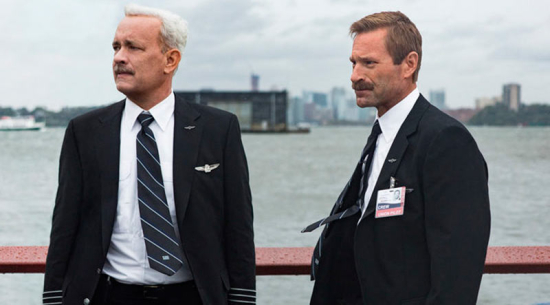 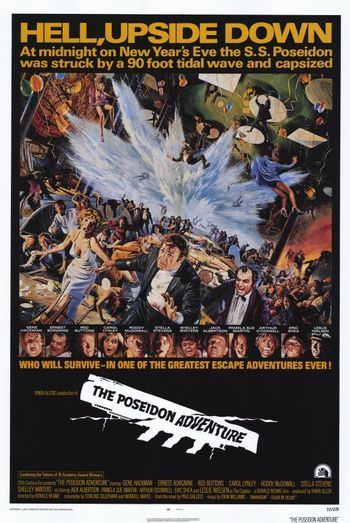 This Ronald Neame-directed drama is an appropriately childlike embodiment of the disaster movie genre that thrived in the 1970s. “The Poseidon Adventure” was the top box office draw in 1973 when I saw the picture at age 10 in Richmond, Virginia.

Producer Irwin Allen had gone from making stock footage-based documentaries in the ‘50s to creating dynamic science fiction television series (such as “Voyage to the Bottom of the Sea”) in the ‘60s. Allen took an obvious genre cue from George Seaton’s 1970 bar-setting disaster picture “Airport.” The message was clear: put together a large cast of likable entertainers (Hollywood stars) on a distressed vessel, and let them interact like a bunch of jazz musicians on, well, the Titanic. The physical obstacles come gratis.

Every cheesy formula cliché, salacious camera angle, and goofy plot device is aimed at the film’s intended audience of 12-year-old boys. The British director Neame feeds his fetish for up-tilted p.o.v. shots of women’s panty-clad bums. There is no telling how many puberty onslaughts this movie triggered.

The cast reads like a who’s-who of big fish from Hollywood’s established-actor talent pool circa 1972. Gene Hackman and Ernest Borgnine milk their cartoonish characters’ trivial power struggle trope for all it’s worth. Hackman plays a liberal preacher with a type-A personality. Borgnine is a meat-headed cop on honeymoon with his new wife, a former prostitute. These were the days when leading men were all character actors; we just called them actors.

The royalty list goes on. Red Buttons, Carol Lynley, Shelley Winters, Stella Stevens, Leslie Nielson, and Roddy McDowall fulfill their 70’s-era character archetypes with utter conviction. The action movie is all about its near-camp tone and patient tempo tested by the rising water level inside the overturned ship. When their number starts to diminish, it feels like losing a friend in the same little-kid way as when a school chum moves away. It wouldn’t be a disaster movie without some significant, and splashy, loss of human life. 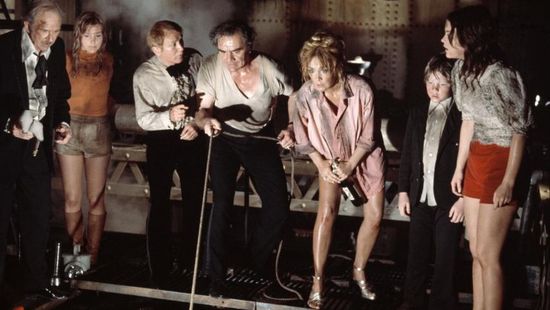 Gene Hackman’s Reverend Scott leads his mostly-willing flock of survivors through the belly of the capsized SS Poseidon luxury liner. Their plan is to climb on the ship’s ceiling toward its hull where the steel is significantly thinner, only “one-inch thick.” The ship’s precarious upside-down condition provides the audience with a bizarre visual perspective. This mystifying set element keeps the audience engaged in the magical physical reality with a puzzling effect. 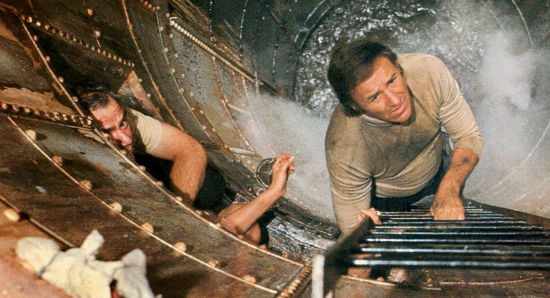 The big spectacle feature earns its stripes during a 90-second disaster sequence in which a 90-foot tidal wave hits the ship just as the clock strikes on New Years’ Eve. James Cameron (“Titanic”) learned everything he knew from this eye-popping action set piece. Through tricks of camera-tilting and a moving set, Neame creates a pure sense of dynamic cinema that takes your breath away. “The Poseidon Adventure” is one disaster you’ll want to return to again and again. 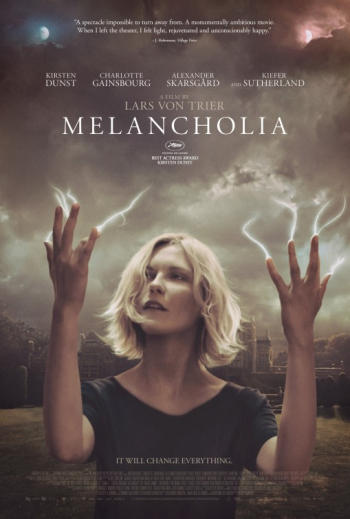 2011 is the year of apocalypse in cinema. "The Tree of Life," "Take Shelter" and "Melancholia" each offer differing visions of Earth's waning days. Lars von Trier evinces consolation for the end of planet Earth and all its evil inhabitants in the form of a colossal planet named Melancholia, which is traveling on an elliptical collision course.

Von Trier opens the film with one of the most haunting and lushly composed sequences ever captured on film. Kirsten Dunst's Justine placidly observes in hyper slow motion as electricity flows between an overcast sky and her fingertips.

Black birds fall around her like harbingers of a funeral procession. Dunst’s delicate features are filled with stern ambivalence. As she reveals through her actions during the night of her wedding party, Justine’s atheism has prepared her better than believers to live out the final hours of human existence with a composure calculated to allow for whatever choices she might make. Telling off her demanding boss, and cheating on her doting husband (Alexander Skarsgård) of just a few hours, are obligatory actions. 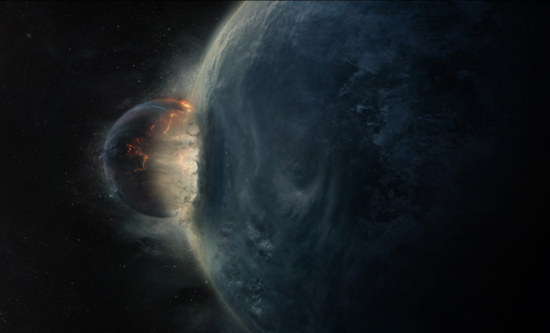 Justine is an anti-heroine without a trace of superficiality. She's a lying, cheating hypocrite just like everyone else. The difference is that Justine admits it to herself. If Justine sounds like an alter-ego of the filmmaker who shook the 2011 Cannes Film Festival, getting himself thrown out of the festival for his incendiary comments during a press conference; she most certainly is. 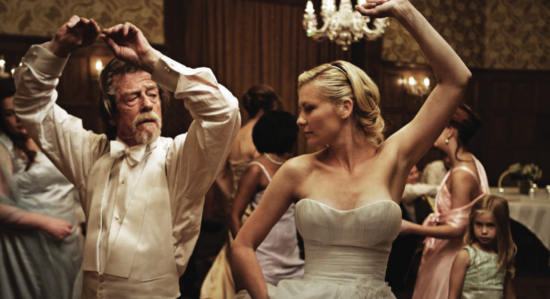 Had the jury at Cannes chosen von Trier's superior "Melancholia" over Terrence Malick's cluster-bomb "The Tree of Life" in spite of von Trier's "persona non grata" status, justice would have been served.

As with all of von Trier’s films, “Melancholia” will divide audiences. Atheist audiences can take special pleasure in von Trier’s exquisitely uncompromising vision. After all, what’s a beginning without an end?

Posted by Cole Smithey at 1:16 AM in Classic Cinema, Disaster, Dystopia | Permalink | Comments (0)