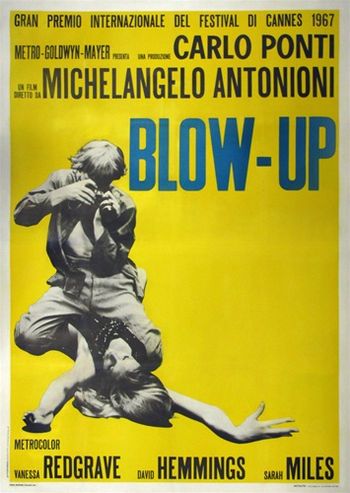 Michelangelo Antonioni’s first English language film is an allegorical murder mystery whose abstract parameters delineate a society where images are more believable, and lasting, than reality.

Antonioni’s puzzling film is book-ended by a Greek chorus of mimes who ride recklessly around London spilling out of an Army Range Rover, an understated reference to the distant war raging in Vietnam at the time the movie was made. Dressed in whiteface and jester-styled clothing, the mute pranksters look like precursors to the violence-obsessed Droogs in Stanley Kubrick’s “A Clockwork Orange” (made five years later in 1971). And yet, Antonioni’s band of social renegades shares an odd unity of opposites with the British military, whose vehicle they inexplicably possess. Nothing is what it seems, and no one acts responsibly in the picture. 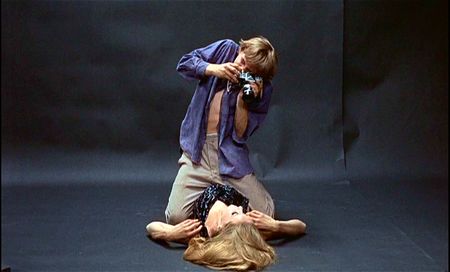 Dressed in rags, Thomas exits a dingy London flophouse where he spent the night surreptitiously photographing homeless men without their consent. He will use the harsh black-and-white photos to add social realist weight (read, credibility) to a coffee table book he is putting the finishing touches on. Thomas is an equal-opportunity exploiter of men, as well as women, though he clearly savors humiliating the latter.

A quick change into his trademark white Levis and barely buttoned blue houndstooth shirt puts Thomas in touch with his arrogant photographer persona. Young “birds” wait outside Thomas’s door, begging for his attention. 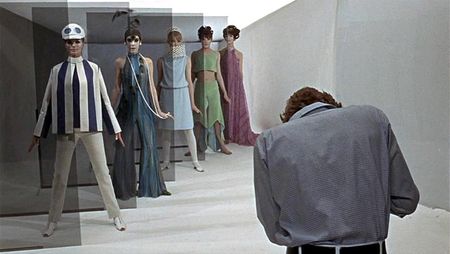 Yelling insults at underfed models during a high paying fashion-shoot bores Thomas to the point of instructing the women to close their eyes so he can furtively abandon them. Thomas can’t even muster integrity while applying his craft. He’s a poseur who knows how to use a camera. The fickle elf is on to his next project, scoping out an antique shop he wants to purchase. While there, our narcissistic man-boy skips into a public park where he covertly photographs a middle-aged bloke frolicking with his much younger girlfriend. In spite of his half-hearted efforts to remain undetected, the girlfriend (Vanessa Redgrave) catches Thomas and demands that he hand over the roll of film. Thomas’s coy refusal brings her, unannounced, to his studio to extract the photos through any means available, even if it means smoking pot and having sex with him. No luck. 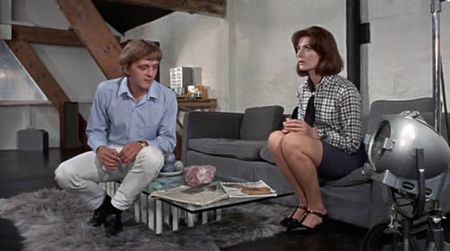 Upon printing the photos from the park and blowing them up, Thomas discovers a third person, a lone gunman hiding in the bushes. Is that a corpse lying on the ground where the couple once stood? Verifying the presence of a dead body in the park reveals the impotent nature of Thomas’s personality. For all of the virility and intelligence he exudes, here is a man unable to function responsibly. He may pretend to care about the value of life, but Thomas can’t access reality without the filter of his camera or the images it produces. Nothing is real when everything is staged. “Blow-Up” remains Antonioni’s most enigmatic, and yet broadly accessible film because it comments on consumerist culture so transparently. 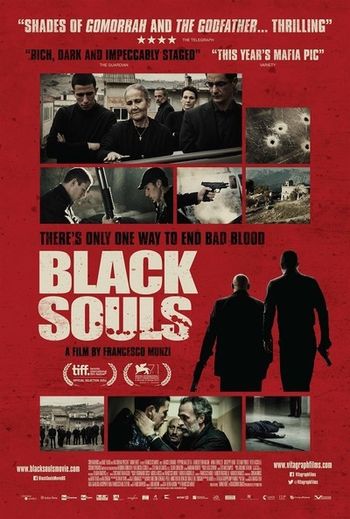 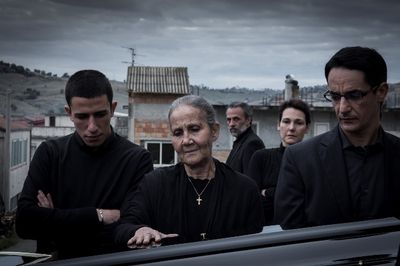 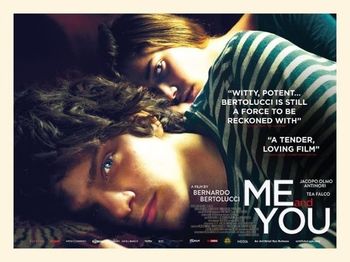 Bernardo Bertolucci’s long awaited return to filmmaking after a decade-long absence is a beautifully photographed and provocative coming-of-age drama in the vein of Bertolucci’s “La Luna” and his last film “The Dreamers.” As its title portends “Me and You” is an intimate film whose emphasis relies on the connection between its two main characters. The story is about two young people attempting to maintain their individuality and humanity with DIY tools of both impractical and idealistic designs.

The labyrinthine basement of a lush Italian apartment building is the claustrophobic setting where 14-year-old Lorenzo (Jacopo Olmo Antinori) plans to hide out for a week rather than attend a snowboarding camp where his mother (Sonia Bergamasco) believes him to be. His mother’s close proximity in their upstairs apartment adds a layer of tension to Lorenzo’s diversion.

With a small fridge filled with Cokes and junk food, Lorenzo would rather play video games on his laptop in splendid isolation than face the outside world. Jacopo Olmo Antinori’s uncanny resemblance to a young Malcolm McDowell — circa “A Clockwork Orange” — places him as an awkward young man of untold potential. He puts on a cold front to his shrink. Insecure and smothered by his relationship with his overbearing mother, Lorenzo desperately needs some quality time alone.

Accidentally discovered by his 25-year-old heroin-addicted stepsister Olivia (Tea Falco), Lorenzo is forced to give up his privacy while her proposed one-night’s stay in the basement with him is prolonged to fill up the entire week. Romantic tension bristles between the two as Sonia directly and obliquely challenges Lorenzo’s still-forming ideas about the world around him. Sonia’s view of the woman who stole her father away is not as flattering as Lorenzo’s perception of his mother. As Sonia goes cold turkey, Lorenzo steps up to care for her even as his curiosity about her feminine nature is piqued.

“Me and You” is Bertolucci’s most restrained film. Its nuance of thematic tones vibrates in a low hum of deeply personal emotional conflict and physical displacement. It is a enduring character study that eschews clichés in favor of discovering elemental truths regarding how young people mature through the choices they make. Lorenzo and Olivia need one another more than they realize, and just as much as they intuitively know.