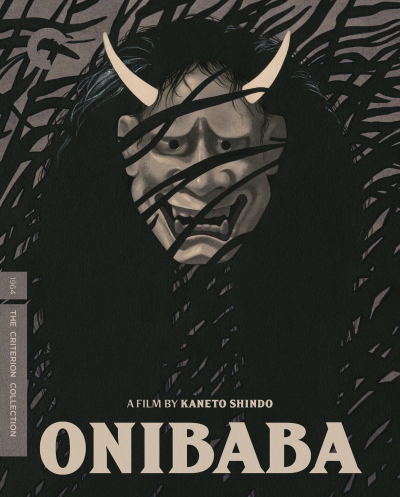 A lush darkness fills every trippy scene in this stone cold (black-and-white) classic of Japanese horror. 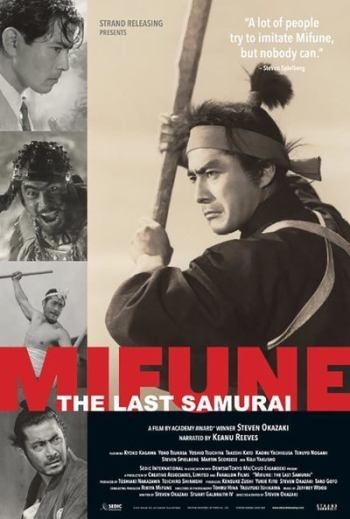 While not the in-depth character study of the prolific Japanese actor that its title implies, “Mifune: The Last Samurai” is a rollicking survey of the gifted artist who played muse to Akira Kurosawa for much of the director’s storied career.

Keanu Reeves provides charismatic voice-over narration in telling an abbreviated (read sanitized) version of Toshiro Mifune’s transition from son to Japanese missionaries living in China, to Japanese Imperial Army soldier during World War II, and on to becoming one of Japan’s most highly regarded actors. 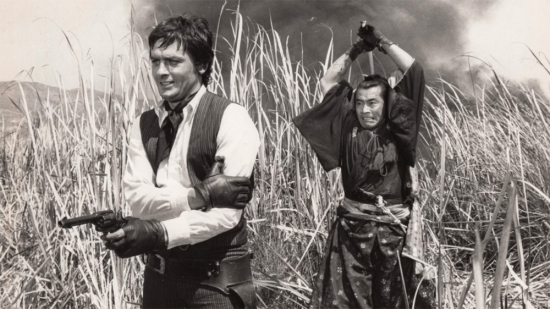 Predictable interview segments with Steven Spielberg and Martin Scorsese put Hollywood’s stamp of approval on Mifune’s well-crafted character creations in films such as “Rashomon,” “Seven Samurai,” "Yojimbo," and “Throne of Blood,” all of which are referenced in essential clips.

Never mind that Hollywood only recently included Mifune in their "Walk of Fame," long after his death in 1997.

“Mifune: The Last Samurai” functions best as an introduction to one of Cinema’s most disciplined and unique actors. Watching this documentary should have the desired effect of inspiring its audience to seek out some of the more than 150 films that Toshio Mifune starred in, to witness the nuance, humor, and untamed fury of his dynamic performances.

There are only a handful of actors in the history of Cinema that have created anything close to the number of indelible characterizations that Mifune made palpable on the big screen. Indeed, no other actor embodied the tragic face of the samurai legend and legacy as did Toshiro Mifune.

Posted by Cole Smithey at 11:52 AM in Documentary, Japanese Cinema | Permalink | Comments (0) 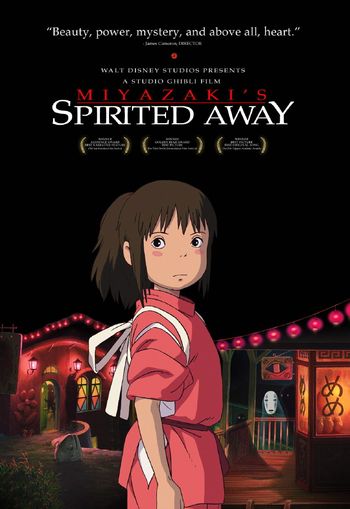 Animation legend Hayao Miyazaki’s divinely imaginative display of madcap surrealism is virtuosic in this episodic coming of age classic. Incredible attention to details of animated visual elements such as deep perspective, fog, smoke, and fire, inform the film’s contrasting elements of realism and absurdist thought that pull in various thematic directions at once.

Miyazaki’s similar devotion to the minutiae of human behavior, as exhibited by a young girl on an odyssey of outrageous fantasy, lends the picture an emotional anchor of empathy. When the little girl runs into a wall at the bottom of a long stairway, we feel it. Regardless of how crazy things get (witness three dancing severed green male heads that transform into a giant baby boy), we are comforted by Miyazaki’s best intentions. Freud would have a field day with this ingenious filmmaker’s twisted nightmare sensibilities.

The picture takes on an epic quality.

Significant to the film’s English translation release is Pixar director John Lasseter’s championing of the family movie to Walt Disney Pictures. Lasseter hired a producer, screenwriters, and talent to translate “Spirited Away” for the Western palate. The effect is a seamless English translation of the original Japanese version that nonetheless retains all of Hayao Miyazaki’s thought-provoking intent, and wonderful sense of humor and surprise.

Chihiro Ogino (voiced by Daveigh Chase) is a 10-year-old Japanese girl, sulky at her parents’ decision to move the family to a new town. Whiny Chihiro needs to learn some trial-by-fire lessons in discipline that her parents aren’t giving her. The girl’s powerful imagination provides just the vehicle for such a transformation into a young adult. 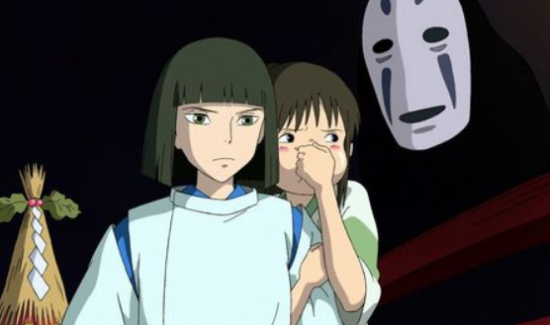 En route their new house, dad takes a “short-cut” leading to a disused theme park that Chihiro’s irresponsible parents insist on exploring with their daughter in tow. Unperturbed by the lack of any other people in or around the park, mom and dad seize the opportunity to gorge themselves on a cornucopia of fresh meats inexplicably displayed at the park’s only open shop. All these two want to do is consume as much food as possible. Dad insists he will pay the bill whenever, if ever, it comes. Miyazaki’s sideways commentary on Japanese society runs deep and personal.

Satire bubbles throughout the storyline involving shenanigans at an exotic bathhouse for spirits who are typically more evil than good. The film’s innumerable caricatures are revealed in bizarre forms born of Miyazaki’s wicked vision. Ralph Steadman has nothing on Miyazaki in the department of the abstract grotesque. 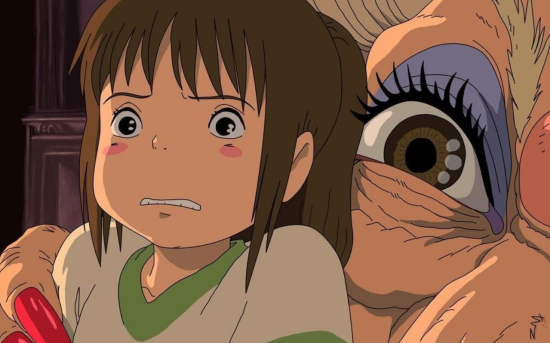 All rational thought flies out the window as mom and dad are transformed into giant pigs before Chihiro’s eyes. The same weird voodoo that robs Chihiro of her parents’ ability to look after her, introduces her to a boy named Haku (voiced by Jason Marsden). Haku is a dragon spirit, which means that he transforms into a giant white flying dragon.

The phallic imagery is intentional. Chihiro has something to long for, other than merely her parents’ liberation from their incarnation as unrecognizable swine. Haku's flying abilities (in dragon form) allow for Miyazaki's signature flying sequences to take your breath away. This is big spectacle animation as only Miyazaki can deliver. The author-director handles the tempo and nuance of the flight sequences is ever so delicately to give the sense of the liberation of flight. 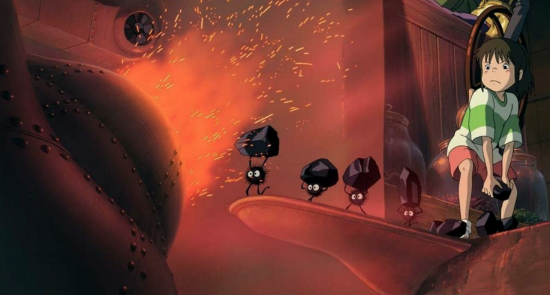 Haku instructs Chihiro to ask for a job in the bathhouse. Haku may not the most reliable counselor, yet Chihiro follows his confident command. Once hired by the establishment’s giant-headed witch Yubaba, Chihiro is at liberty to interact with the bizarre spirit creatures that visit the baths to cleanse their bodies and souls. The shocks and lessons that Chihiro receives, matures her into a young adult, able to see beyond the limitations of her parents, and also her own.