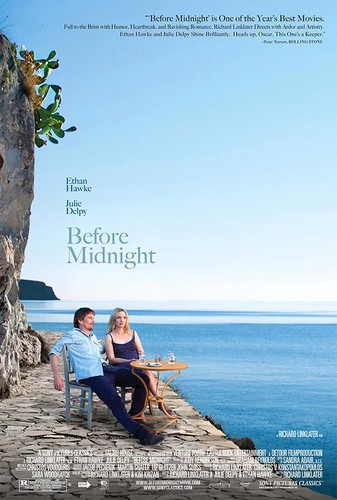 Gen X Grows Up
Linklater, Delpy, and Hawke Put a Cherry on the Cake

For better or for worse — mostly better — Julie Delpy and Ethan Hawke may best be remembered for their romantically euphoric trilogy in collaboration with wunderkind Generation X auteur Richard Linklater. Each of Linklater's “Before” films — about a developing romance between a talkative American writer and a hyper-articulate Frenchwoman — has improved on its predecessor — and that's saying something. Fireworks of authentic stream-of-consciousness dialogue, spikes of emotion, and the madness of love reach a crescendo of palpable joie de vivre in “Before Midnight.” Audiences can't help but admire this bold expression of intellectually and erotically charged connection between two undeniably attracted souls. 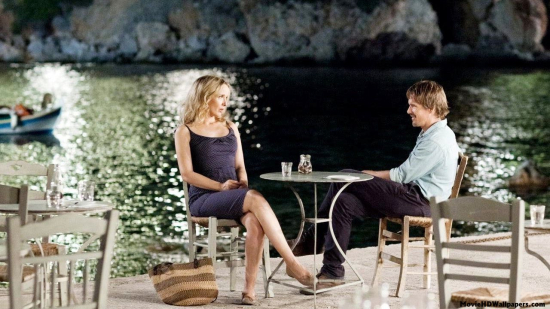 The first collaboration “Before Sunrise” (1995) introduced romantically inclined couple Jesse (Hawke) and Celine (Delpy) traveling on a train from Budapest to Vienna. Sparks of curiosity and lust ignited to the strains of Vivaldi, Straus, and Kate Bloom. “Before Sunset” (2004) found the lovers reuniting for a one-night-stand of sorts in Paris where Jesse — a successful author inspired by the events in the first film — reads from his latest book. Things got complicated. 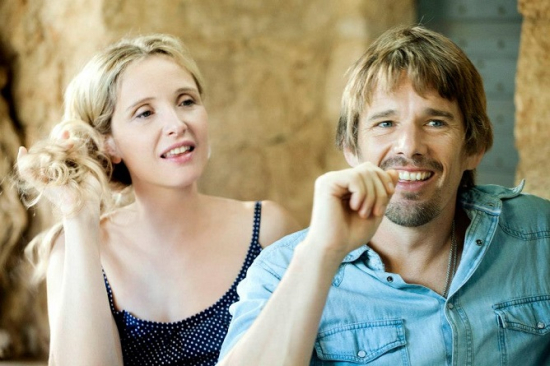 Now, nearly two decades since they first met, the couple lives together in France with their twin daughters. The film begins at the end of a summer vacation in Greece where they have spent the past six weeks sharing the exotic home of a fellow author and his family. Jesse sees his son off at the airport, destined to return to Jesse’s ex-wife. [Celine can't stand the thought of the woman.] Hawke is a caring but awkward father who worries that his 12-year-old boy didn’t have enough fun during their time spent bonding together in the Mediterranean paradise. The naturalistic scene sets the film’s neo-realistic tone. We are hooked. 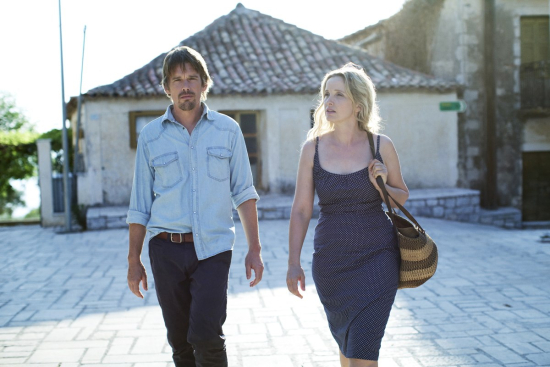 A real-time conversation plays out between Jesse and Celine as they drive back to their host’s house while the girls sleep in the back seat. They discuss the long-term effect on the girls of their decision to pass up a promised sightseeing stop at a natural landmark. The seemingly impromptu conversation hits a staggering number of relationship reference points that draw the audience inside their casually intimate style of communicating. No topic is off limits. Politics, sex, religion, literature, and economic realities all come percolating to the surface. It's clear that Linklater and his two actors spent much time together crafting and polishing the personalized script. The dialogue shimmers. 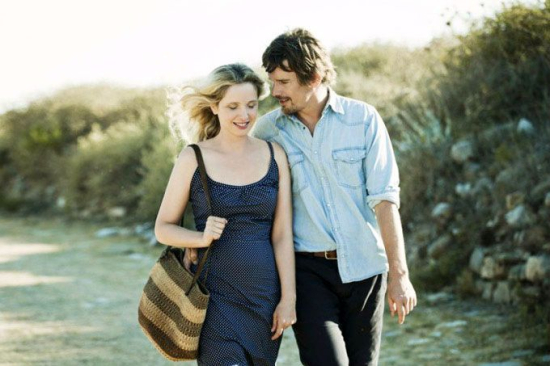 A farewell dinner with their hosts gives way to a gifted night at a resort hotel that promises the couple some welcome alone time. However, Celine’s possible bipolar disorder crashes the party late in the game, causing Jesse to reach deep into his pocket of tricks to bring Celine around to a romantic reality built as much on fantasy as on a unifying method for achieving harmony in the relationship. “Before Midnight” feels like two intimate weeks spent with Jesse and Celine, compressed inside a 108-minute movie. A higher compliment, I cannot imagine. Bravo. 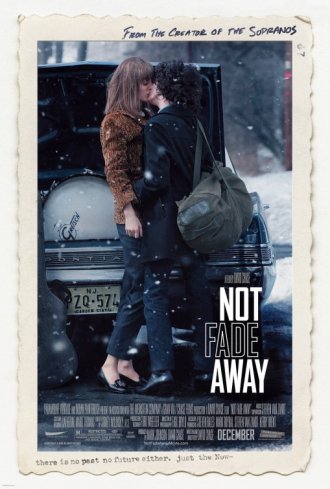 “Not Fade Away” is a freeform drama about an old fashioned subject — the romantic rite to passage that comes from playing in a rock ‘n’ roll band. It’s a movie that has “labor of love” plastered all over it. Writer-director David Chase (creator of “The Sopranos”) is clearly living out his childhood dream of being a young successful rock drummer.

Part social essay and part nostalgic character study, the movie rambles by in episodic time jumping skips about Douglas (played for keeps by John Magaro), a Bob Dylan-lookalike who plays drums in ‘60s-era New Jersey. Social change is all around. The production design team stays true to the look and feel of the period. Great mood. You feel like you've gone back in time. The music of Van Morrison, Robert Johnson, James Brown, and the Kinks feature prominently. Choice blues tunes from several other Left Bank-favorites impart a sophisticated level of musical taste to the organically motivated narrative.

True to his rebellious ‘60s ethos, lefty Douglas doesn’t get along with his working-class dad Pat (James Gandolfini). Douglas falls in with a covers band playing Stones’ songs at parties in their suburban area. A chance to play front man brings out Douglas's rock persona ego in full swagger. Douglas proves the power of his stage charm when he takes up with a high-school hottie named Grace (Bella Heathcote). Heartbreak, reversals, and squandered opportunities come with the territory.

“Not Fade Away” is a detail-oriented movie. The filmmakers include eccentric bits of character behavior that jives with the social-consciousness zeitgeist of the period.

As its title hints at, “Not Fade Away” is about the perpetuation of communally created rock ‘n’ roll music. It’s a coming-of-age movie with its heart in the right place. Besides, it's almost impossible to fault a movie that uses the Sex Pistols’ version of Jonathan Richman's "Road Runner" in the finale scene. 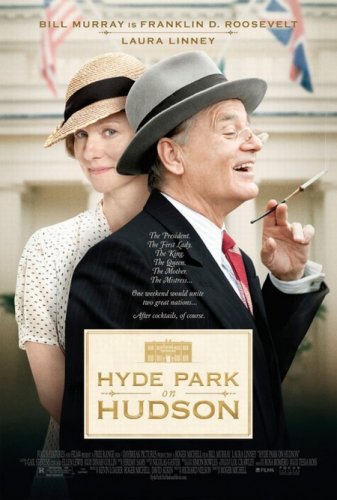 If only we could see Bill Murray’s FDR hanging out with Daniel Day Lewis’s Lincoln, then there might be…well, another mediocre life-slice movie about dead presidents. Like Day Lewis, Murray builds his character from the ground up, making his mortal incarnation of a historical political figure thoroughly convincing. Playing FDR’s romantically attracted sixth cousin Margaret “Daisy” Suckley, Laura Linney knows just how to harmonize with Murray’s performance, undercutting it when the scene demands. From an acting standpoint, “Hyde Park on Hudson” and “Lincoln” each provide textbook examples of incredibly polished dramatic work from some of the finest actors around. Still, if Steven Spielberg’s piece of revisionist history presents a brief essay, “Hyde Park on Hudson” is but a tastefully composed snapshot. 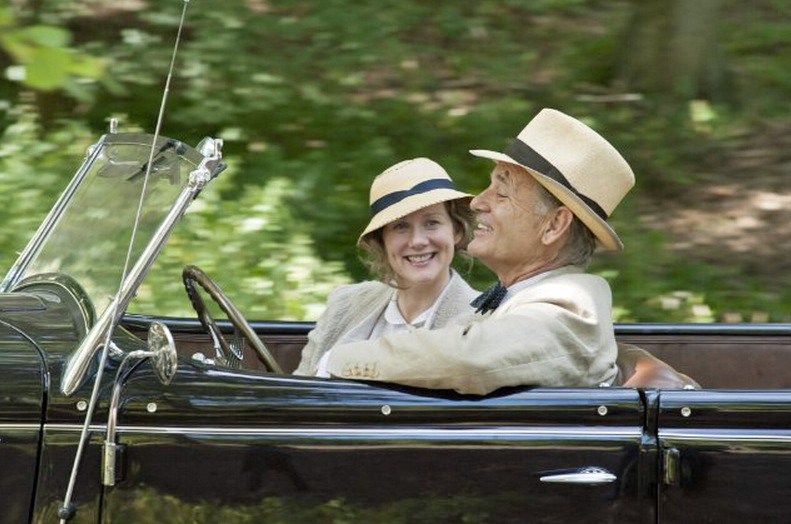 Where “Hyde Park on Hudson” falls short is in the script department. Richard Nelson’s screenplay version of his own stage play doesn’t know where or how to expand to fit the cinema screen. The impetus for the story comes from Daisy’s letters and diaries retrieved after her death. Nelson doesn’t make much of a splash with his debut feature script. The underinflated narrative is confined to a few days, when King George VI (Samuel West) and Queen Elizabeth (Olivia Williams) visit FDR at his upstate New York compound, which he shares with his domineering mother Sara Ann (Elizabeth Wilson) and emotionally remote wife Eleanor (Olivia Williams). Responsive movie audiences will remember King “Bertie” from Colin Firth’s characterization in Tom Hooper’s 2010 film “The King’s Speech.” However on-the-nose in might have been, it would have been a welcome touch had Firth reprised the role here since West’s portrayal of the stuttering George goes all but undetected. 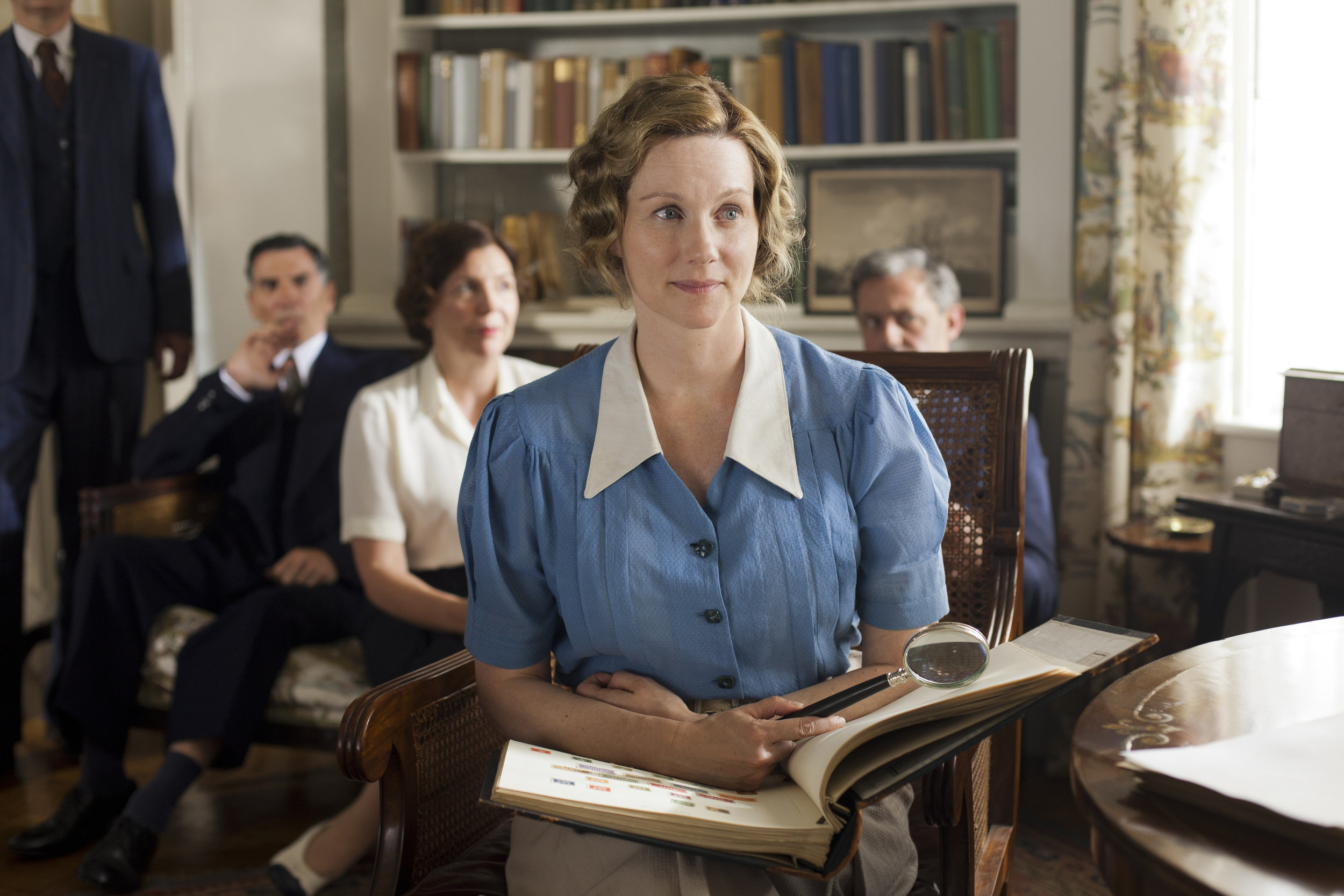 As with the miscalculated emotional emphasis of “Hitchcock,” the script places too many narrative eggs in a basket of repressed jealousy. Daisy is hardly able to act on her mild mistreatment by a powerful world leader with cavalier concern for her emotional wellbeing. 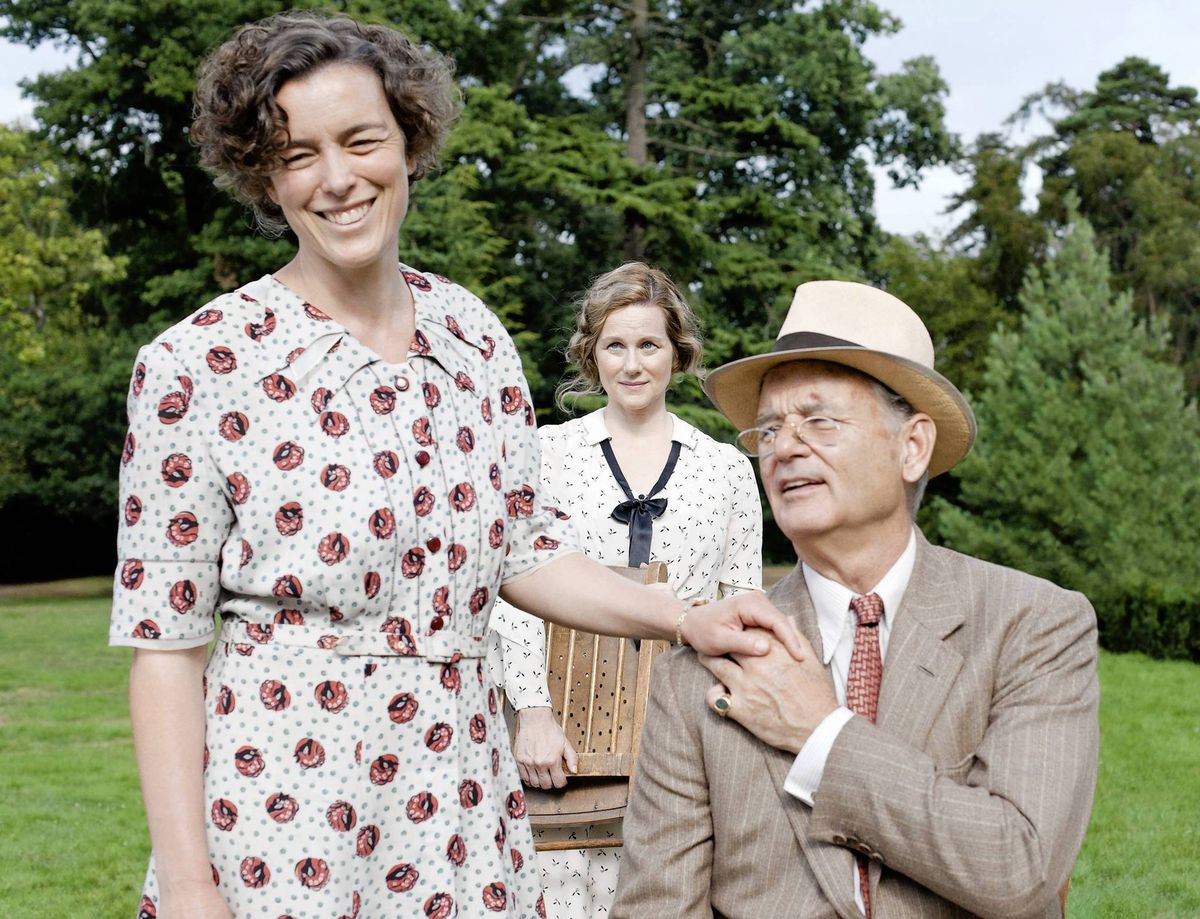 Director Roger Michell (“Notting Hill”) knows how to handle milieu and atmosphere. Every composition of period perfection is a sumptuous delight to the eye. You’d never guess that you were looking at an English countryside as opposed to the film’s New York State setting. When FDR takes Daisy on a pastoral escape in his big convertible, mythology and romance connect. 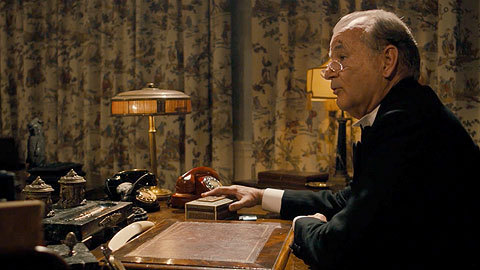 Some of the film’s humor borders on slapstick situational comedy that might work on the stage, but arrives at odds to the film’s remote tone. A running gag about British royalty eating hot dogs for lunch at Walden falls pancake-flat. “Hyde Park on Hudson” feels like two-thirds of a movie. There aren’t enough depths of subplot support to allow Bill Murray’s hemmed-in character to take hold. The movie is great to look at, but the story leaves you wanting so much more.