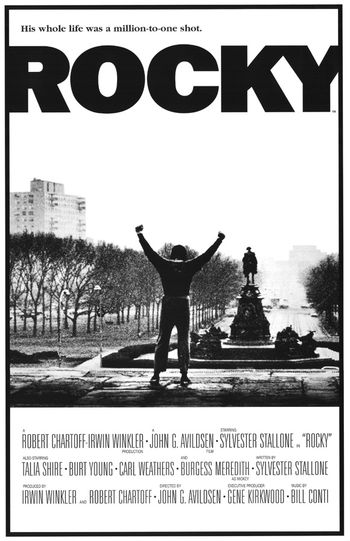 Sylvester Stallone’s breakout sports drama did more than put the inspired screenwriter and earthy method actor on Hollywood’s A-list. It led to one of its most successful franchises with six well-received features released over a period of 20 years.

If Stallone’s meathead portrayal of a would-be boxing contender is reminiscent of Marlon Brando in “A Streetcar Named Desire“ or “On the Waterfront,” the hat-tip is intentional. Stallone makes his homage to Brando clear. His version of Brando’s famous “Stella”-yell (from “Streetcar”) is an essential part of this film’s cathartic climax, and it is a doozy. 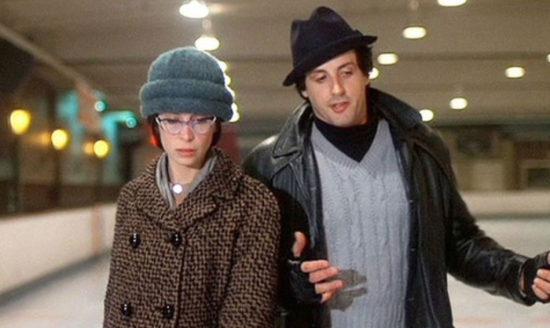 Talia Shire’s Adrian is on the receiving end of her lover boy’s impatient call. Like Brando’s early career characters, Rocky is a sensitive hulk whose inarticulateness expresses more than a dictionary’s worth of quotations. This is a character you feel down to your toes.

Stallone’s humble pugilist lives in Philadelphia’s impoverished mean streets that he traverses with a heavy sense of loneliness that matches his lumbering physicality. Rocky Balboa (aka “The Italian Stallion”) is a salt-of-the-earth literary creation who keeps his ambitions within reason, unlike the 21st century’s generations of self-obsessed cellphone users who imagine that every selfie they take will usher them into a world of wealth and fame. 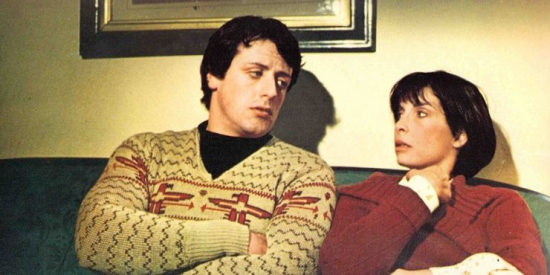 Rocky is committed to boxing’s rough demands of taking and delivering punches in smalltime bouts that pay peanuts. “Rock” makes his rent by working as a thumb-breaking collector for a smalltime mobster (played by the ubiquitous character actor Joe Spinell). Rocky’s gym trainer Mickey (Burgess Meredith) kicks him out of his gym as a result. Cigarettes and beer help Rocky weather his dark days. For his part, Burgess Meredith carries the cinematic weight of two actors when he takes over as Rocky’s trainer when the chips are down. 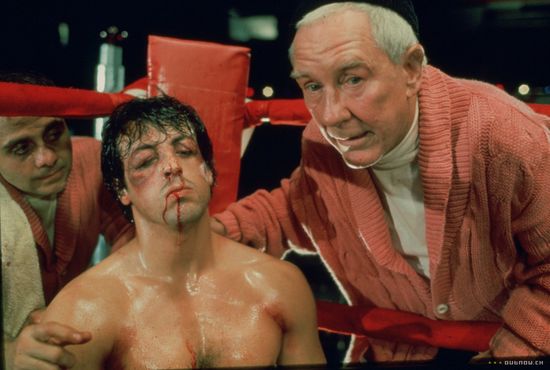 The romantic connection between Rocky and Adrian, a homely pet store clerk, is the film’s secret weapon. That Rocky has to negotiate with Adrian’s hot-tempered brother Paulie (Burt Young) in order to keep her close to him, personifies the purity of his intentions. Adrien brings out the best in Rocky, and vice versa. He can be funny around her, and she in-turn is liberated to show off her feminine side. Both characters blossom in the sweat-drenched atmosphere that Rocky provides. Bill Conti’s suggestive musical score punctuates the drama with light touches of musical embellishment. 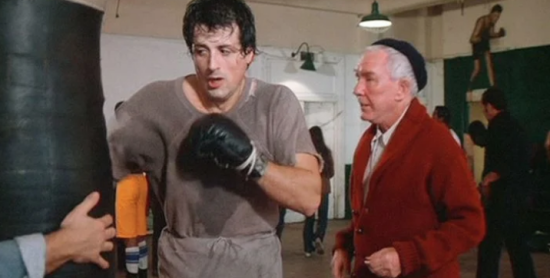 John G. Avildsen’s career was well established by the time he directed “Rocky.” His consciously unfussy approach fits with Stallone’s straight-ahead script. Everything looks imperfect, even ugly; as well it should for the demands of the rough and tumble story at hand. 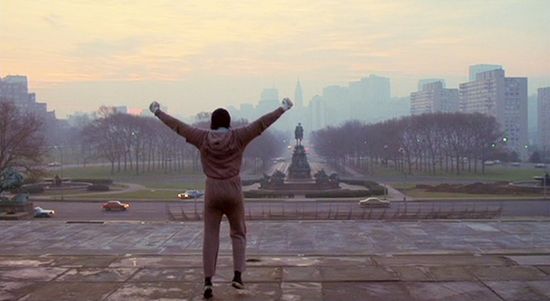 “Rocky” struck a nerve with American audiences at the time because it spoke directly to a ‘70s era lower middle-class dream of success that has since been exploded into a billion pieces. Arriving the same year as “Taxi Driver,” this iconic movie casts an oddly equal angle on the country’s sense of social deprivation after the political assassinations of the ‘60s and the authorial wipeout that followed Nixon’s impeachment behind the Watergate hearings. Rocky gets a shot at the title as much from his heritage as an Italian boxing stud as from his roughhewn skills in the ring. 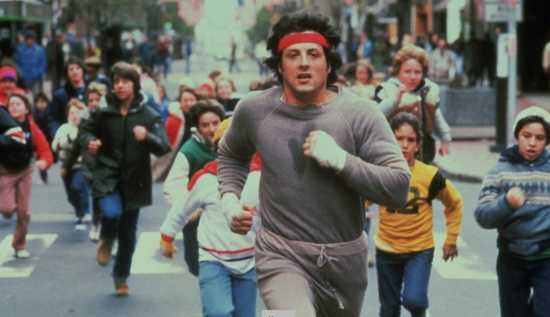 Perhaps the American dream of the ‘50s is still attainable, or as least it might have been in 1976. The film's carefully choreographed boxing sequences play second fiddle to the renowned workout sequence in which Rocky runs up the stairs of the Philadelphia Museum of Art before turning to face the city with his arms raised in a victory stance. Preparation is everything. 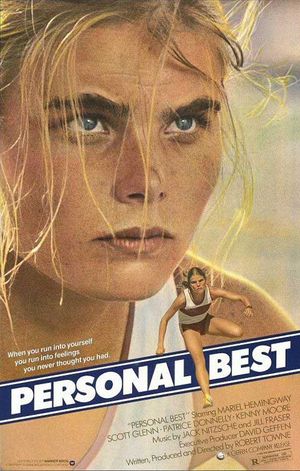 Although screenwriter Robert Towne's directorial debut fell largely on deaf ears when it was released in 1982 "Personal Best" remains a powerful examination of high-stakes female athletes during the late ‘70s, an era when smoking pot and drinking beer were part of America’s cultural landscape — even for Olympic contenders.

Most significant is Towne’s pitch-perfect depiction of a lesbian relationship that goes through various stages of bliss, disagreements, and outside pressures over the course of a few years. The auteur’s striking ability to use the sexuality of his story's two lead female characters as an integral aspect of their ambitious motivations is an impeccable example of eroticism's function within a narrative framework. 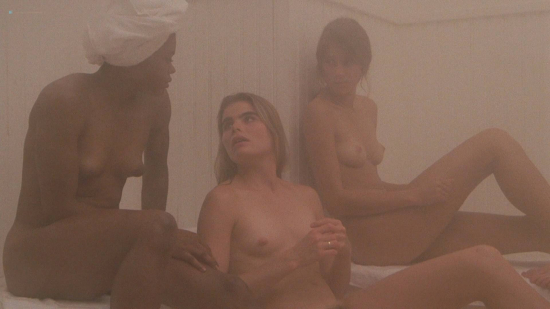 The author of such film classics as "The Last Detail" (1973) and "Chinatown" (1974) flexes his writing muscles to conjure the atmosphere Olympic-level female athletes who eat, breathe, and live for the opportunity to conquer their opponents, as well as their own mental and physical limitations. In a role that should have made Mariel Hemingway the biggest female star in Hollywood for the ‘80s, ‘90s, and beyond, the indisputable beauty plays track-and-field runner Chris Cahill. Chris’s troubled promise as a professional athlete starts to look up after an unfortunate restaurant episode puts her in the car of Tory Skinner (Patrice Donnelly), a track-and-field star with an established coach. Romance blossoms between Chris and Tory who shack up in Tory’s San Luis Obispo apartment. 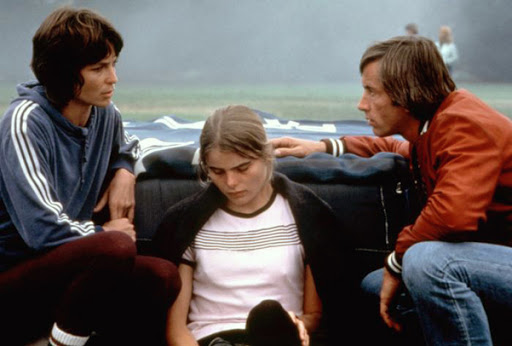 Tory imposes on her coach Terry Tingloff (Scott Glenn) to give Chris a chance during a routine practice. Chris suitably impresses Coach Terry, who harbors no illusions about the tricky nature of Chris’s and Tory’s romantic relationship within the demands of competing for a spot on the 1980 Summer Olympic Team. 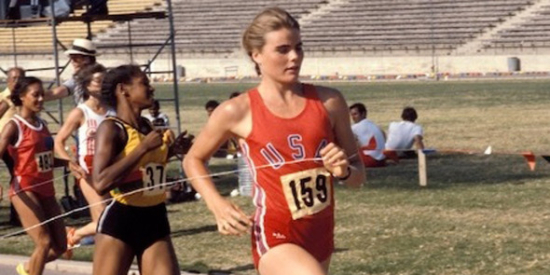 A touch of American politics provides a backdrop for the story due to President Jimmy Carter’s boycott of the 1980 Summer Olympic Games as punishment for Russia’s recent invasion of Afghanistan. A television news commentator announces during the film’s climax competition, the competing athletes are, “all dressed up with no place to go.” 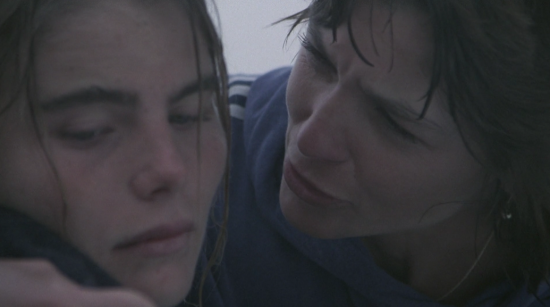 “Personal Best” takes a matter-of-fact approach toward the intrinsic sensuality of professional female athletes. Towne uses a sauna as a frequent meeting place for the girls’ team to congregate in the nude to laugh and joke, but also to carry on serious discussions. Chris’s bisexuality is not commented upon, but rather comes about organically after competitive circumstance separates her from Tory. A frank bit of innocent humor comes during an intimate scene between Chris and her new boyfriend when she follows him to the bathroom to hold him while he pees. The scene perfectly captures Chris’s fearless spirit of childlike curiosity and determination. 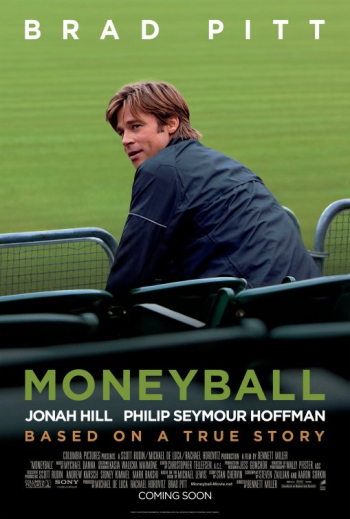 Director Bennett Miller (“Capote”) does the improbable. You don’t have to be a math nerd or a baseball fan to savor every minute of Miller’s cinematic balancing act built on Billy Beane’s ah-ha season with the Oakland Athletics in 2002.

Screenwriters Steven Zaillian and Aaron Sorkin provide a solid foundation based on Michael Lewis's book about Beane's unique approach to putting together a championship baseball team on a comparatively tiny budget. 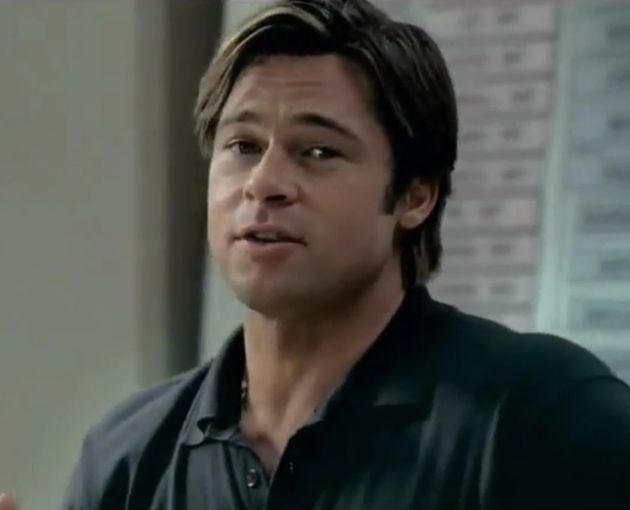 Brad Pitt gives the performance of a lifetime as former big league player Billy Beane, who recognizes talent when he sees it even if that talent is for crunching numbers. Only Pitt could make chewing tobacco look sanitary. Jonah Hill establishes himself as a dramatic actor of consequence as Peter Brand, a bean-counter with an unconventional viewpoint amount which baseball stats matter most. Together, Pitt and Hill are exquisite. Hill's beautifully understated performance allows for sublime levity at especially significant moments. Some of the film’s sweetest bits of humor come at Johan's Hill’s clever command. If last year's thinking-outside-the-box-movie "The Social Network" gave cynical insight to a social activity platform that is already approaching a crisis of identity, "Moneyball" has a more lasting quality. What’s profoundly interesting is how the romanticism of baseball comes through via sidelong moments of deeply personal experience. When Beane’s daughter plays a song for him on guitar in a music store, it somehow resonates through a terse interplay of negotiation strategy that Beane and Brand coordinate during a telephone conference.

“Moneyball” has a euphoric characteristic of passion and intelligence that transcends the motivations of life. There’s more to the game of baseball, and life, than meets the eye. As Billy Beane and Peter Brand proved, you can find deeper truths if you're willing to look long and hard enough, and believe in the proof before you. Oscar season has officially begun. 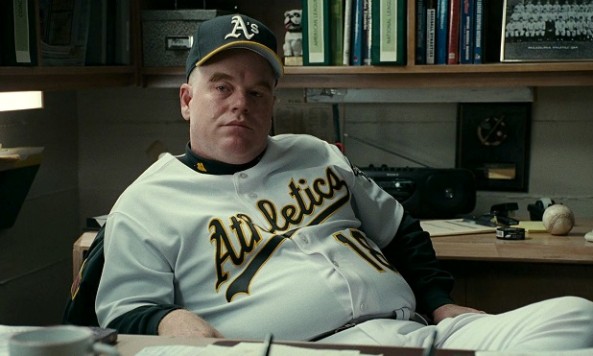