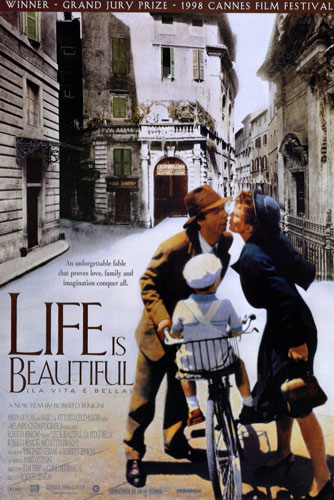 Roberto Benigni’s finest hour arrived in 1997 when the triple-threat writer/director/actor delved deep into Charlie Chaplin territory — see “The Great Dictator” (1940). Benigni — a natural mime in the worthiest sense of the word — brilliantly combines slapstick comedy with nuanced social commentary about the Holocaust and responsible parenting in a movie that threatens to implode at any moment. It achieves quite the opposite. 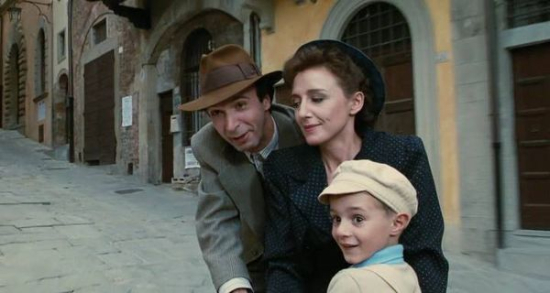 The first act sets up Benigni’s perpetually romantic Jewish character Guido Orefice. Fresh from the countryside, Guido gets a job working as a waiter in a posh hotel in Arezzo, Italy in 1939. A series of coincidental and surreptitiously intentional meetings with his idealized incarnation of femininity, Dora (played by Benigni’s real life wife Nicoletta Braschi), puts Guido through a series of socially awkward situations involving the creeping antisemitism of Mussolini’s fascist regime. An impromptu lesson for grade-school children regarding the “superior race” allows Benigni, the guileless clown, to send up hypocrisies of the fatally-flawed concept with an innocent approach that is disarming in its simplicity. The Jewish character, assigned by “racist Italian scientists,” flaunts his perfect “Aryan” navel and ear lobes as physical traits to be admired. Such pithy sarcasm about the root of the Nazi mindset, as delivered by a Jewish character, arrives like a breath of pure oxygen in a coal mine. 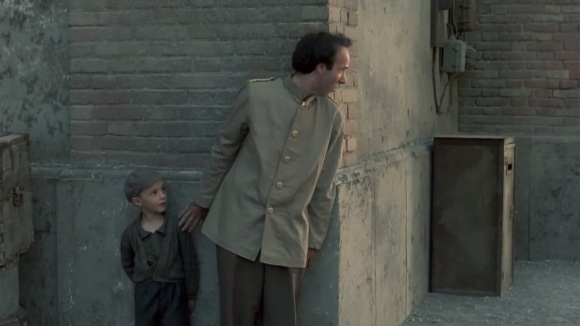 The sophisticated but unfulfilled Dora is due to wed a hulking fascist bureaucrat whose black fedora Guido has a compulsive habit of swapping for his own less expensive hat. Benigni’s comic metaphors are at once playful and yet full of sidelong attacks against the cruel status quo that oppresses Italian society.

Guido is so shamelessly sincere in his earthly motivations that at times he seems to levitate while expressing himself. Lightness is his trump card. When Guido steals Dora away from her fiancé on a rainy night to confess how much he wants to make love to her, his romantic honesty transcends every spastic goof he involuntarily makes.

In a flash Guido’s wish comes true. Guido’s marriage to Dora introduces the couple’s jovial five-year-old son Joshua (Giorgio Cantarini). When the Nazis come for Guido and Joshua, the gentile Dora insists on climbing aboard the same train, bound for a concentration camp. 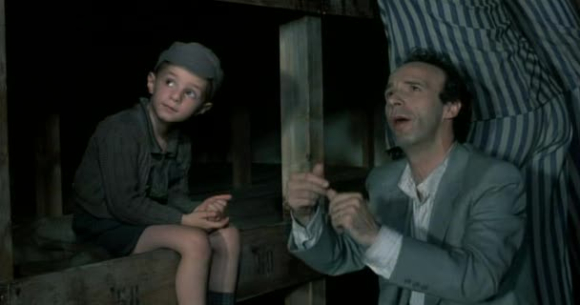 The plot turns on the clever way Benigni’s nimble-minded character turns the concentration camp experience into a game for the sake of his son. He tells Joshua that the camp is a contest where points are awarded toward winning a military tank. Regardless of how much Joshua comes to doubt his father’s idyllic framing of the horrors that surround them, Guido never lets down the pretense. As such, Benigni’s character represents a model parent whose selfless conviction to his son goes beyond martyrdom. Guido’s role in his child’s future is not about sacrifice; it is about misdirection. That’s where the beauty lies. From Guido’s perspective life is indeed beautiful—regardless of where it is lived. 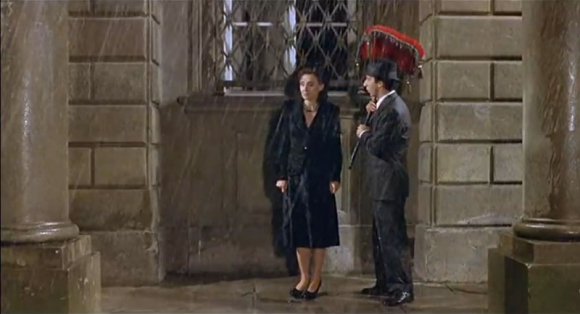