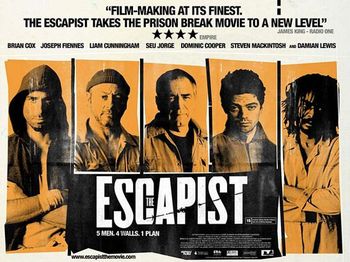 Director/co-writer Rupert Wyatt deconstructs the typical prison escape story form to dramatically successful effect with the help of a strong ensemble cast. Brian Cox gives a compact yet dynamic performance as Frank, a long-term British penitentiary prisoner motivated by the recent near death overdose of his 21-year-old daughter to plot an urgent escape with the help of four other prisoners. Lenny (Joseph Fiennes), Brodie (Liam Cunningham), Batista (Seu Jorge), and Lacey (Dominic Cooper) are the inmates whose particular skills come into play during the daring prison break. Wyatt jumpstarts the movie with the getaway already in progress, cutting between foreshadowing events, to create a lean storyline unfettered by any tempo-dulling exposition. Benjamin Wallfisch's and Lol Hammond's percussive musical score solidifies the ever expanding and contracting suspense that crescendos with a plot twist that gives the film's title its true meaning.
(IFC Films) Not Rated. 103 mins. (B+) (Four Stars)

Listed below are links to weblogs that reference Featured Capsule: The Escapist: