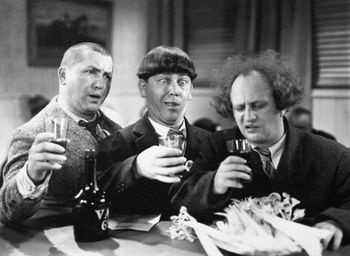 What do Sean Penn, Jim Carrey and Benicio Del Toro all have in commom?

The actors are scheduled to play the Three Stooges in the Farrelly Brothers' written and directed feature-length production "The Three Stooges" (due out in 2010).

Penn will play Larry, Carrey will play Curly and Deo Toro will play Moe. Carrey is due to gain 40 pounds for the role of Jerome "Curly" Howard. Now if only the Farrellys could get Iggy Pop to play the butler.

Listed below are links to weblogs that reference Stooges Surprise: