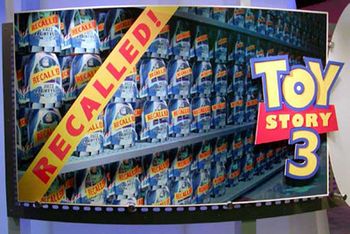 Last Friday I did what I usually do on Friday mornings, I walked down to my local cineplex to pay to see a movie (in this case "Toy Story 3"). After lunch I wrote up my capsule review. At the end I gave it a "C+" grade. Between B- and C+ is where I draw the line amid good and bad to fit to Rottentomatoes' "fresh" or "rotten" rating system.

I posted the review on my website (ColeSmithey.com), and on Rottentomatoes. By Saturday morning I had a message from a website asking for a phone interview and the kind of hate-mail and death threats you'd expect for Joran Van der Sloot. The world wide web had turned into a tsunami of negative attention directed at myself and Armond White, the 146th and 147th critics to weigh in on "Toy Story 3." The problem was that I had dared to tarnish the film's sternly guarded "100%" rating on Rottentomatoes, which would have given the trilogy three perfect scores. White redoubled the insult by posting his even less favorable review 15-miniutes later.

Sites like Time Magazine, The Wall Street Journal, and AOL's PopEater were quick to lump White's and my reviews together as critics who "hated 'Toy Story 3'." How my C+ grade equaled "hate" mattered not for the frothing complicit public protectors of Disney•Pixar. As with everything else in the American media there's no room for nuance in today's court of public opinion; it's all or nothing. My review was being sniffed at like it was a box of Cracker Jacks with no prize. Although I'd made fifteen points about specific problems I had with the film, some readers seemed unable to grasp a single criticism. Did they even bother to read it, I wondered. The answer was painfully clear. All they needed to know was that I didn't like a movie that most of them hadn't even seen.

There isn't a film I can think of that doesn't have detractors, so why should "Toy Story 3" be any different? Yet the media's framing of me as an attention-hungry film critic, gaming the system at the expense of a movie franchise's place in history is a stretch editors were happy to make. On the face of it, you could surmise that hate-mongers like Rush Limbaugh and Glenn Beck have effectively opened the floodgates for a pervasive conscience-free mob mentality to breed like gangrene. Now it's on the menu at Time Magazine and The Wall Street Journal.

As the Staff Film Editor for "Kidsville News!," where I deal exclusively with G and PG-rated movies, I'm aware of ratings for children's films. I have young nieces and nephews with responsible parents who are sensitive to what their kids see. I could not in good conscience endorse "Toy Story 3" as a G-rated film that meets their criteria. As well, Hollywood is currently changing the game on what audiences can expect from a "3-D" movie so they can charge higher ticket prices for an inferior product. "Toy Story 3" is a poster child of this unsavory business practice.

By definition, being a critic means it is my job to "critique." I wrote my "Toy Story 3" review just as I write any piece of criticism--with honesty, sincerity, and a singular mission to express my ideas as clearly and briefly as possible. For the media and members of the public to feign indignation over such a trivial issue as an aggregate website's critical rating of a movie, as an excuse to unify groupthink at the cost of all independent thought, is a bellwether of where America is at these days. It's not a safe place for kids, but don't say it out loud.