BRING ME THE HEAD OF SAM PECKINPAH 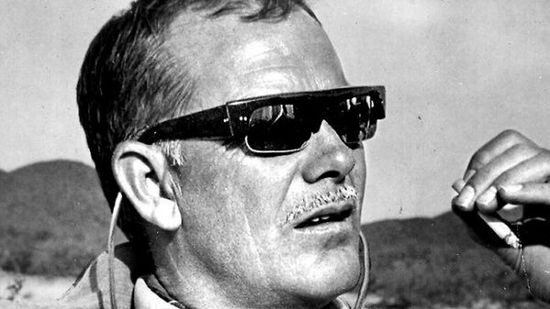 New York, NY (February 10, 2016) – The Film Society of Lincoln Center announces Bring Me the Head of Sam Peckinpah, a complete retrospective of the film work of cinema’s great choreographer of blood and bullets, March 31 – April 7. The director’s filmography, originally presented by the Locarno International Film Festival, will screen almost entirely on 35mm.

“Peckinpah was clever and he was demonically intuitive, and he had such self-dramatizing brio. He liked the hopelessness of it all; the role he played was the loser. And though the competition is keen, he's perhaps the greatest martyr/ham in Hollywood history.” – Pauline Kael

Sam Peckinpah ushered in a new era of American filmmaking with his deliriously violent, coolly existentialist, strikingly lyrical works, which spoke to an American public disillusioned by events like the Vietnam War and Watergate. A pivotal director who revolutionized the Western and action genres, he stood between worlds, straddling the tradition of craft that defined the classic studio era and the freewheeling experimentation of New Hollywood. At their heart, Peckinpah’s movies are elegies: for the ideals of the Old West, for honorable men compromised by circumstances beyond their control, for a mythic America that may never have existed.

His stylistic innovations—particularly the iconic use of slow motion and rapid-cut editing—and balletic, blood-spattered action sequences in titles like The Wild Bunch, Straw Dogs, andBring Me the Head of Alfredo Garcia have been justly celebrated. Less remarked upon is that Peckinpah could be surprisingly tender in gentle, moving films like The Ballad of Cable Hogue and Junior Bonner.

Featuring all 14 of the director’s films, from his remarkably assured 1961 feature debut The Deadly Companions to his final, 1983 conspiracy thriller The Osterman Weekend, this complete retrospective is an opportunity to view the dynamic, dazzlingly inventive works of a maverick director who refused to compromise his singular vision.

Organized by Dennis Lim for the Film Society of Lincoln Center. This program was selected from the Sam Peckinpah retrospective curated by film programmer and historian Roberto Turigliatto at the 2015 Locarno Film Festival, organized in collaboration with the Cinémathèque Française in Paris and the Cinémathèque Suisse in Lausanne.

Tickets go on sale Thursday, March 17 and are $14; $11 for students and seniors (62+); and $9 for Film Society members. See more and save with the $99 All Access Pass or 3+ film discount package. Visit filmlinc.org for more information.

The Ballad of Cable Hogue
Sam Peckinpah, USA, 1970, 35mm, 121m
Peckinpah’s unexpected follow-up to The Wild Bunch was this wonderfully loose-limbed, cockeyed comedic Western, a winning blend of slapstick and frontier myth. Left to die in the desert by his shiftless compatriots, illiterate man-child Cable Hogue (Jason Robards) gets the last laugh when he discovers water and sets about establishing a homestead on a remote sliver of land—abetted by a rapscallion preacher (David Warner) and a kind-hearted prostitute (a sensational Stella Stevens). Peckinpah’s warmest and most charming movie begins as a rollicking pioneer comedy and gradually develops into a bittersweet, disarmingly moving fable about the decline of the American West.
Sunday, April 3, 6:30pm
Tuesday, April 5, 9:00pm 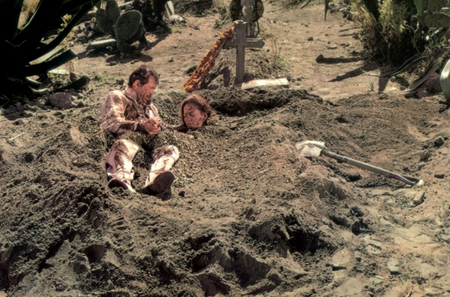 Bring Me the Head of Alfredo Garcia
Sam Peckinpah, USA, 1974, 35mm, 112m
A man, a severed head, and a sunbaked excursion into delirious ultra-violence: Peckinpah’s grindhouse–meets–art house pulp masterwork gives regular character actor Warren Oates his most memorable role as a sunglasses-sporting, tequila-swilling barroom ivory tickler who embarks on a demented road trip through Mexico to fulfill the titular request. The only one of his films on which Peckinpah had final cut—and thus is the purest distillation of his fatalistic vision—this existential acid Western has the surreal texture of an extended hallucination.
Friday, April 1, 9:00pm

Cross of Iron
Sam Peckinpah, UK/West Germany, 1977, 35mm, 133m
Peckinpah unleashes some of the most harrowing combat footage ever put on film in this senses-shattering World War II drama. James Coburn delivers a tightly wound, tour-de-force performance as a disillusioned German soldier who clashes with his superiors as he and his platoon are dragged through hell on the Russian front. The bravura battle sequences are visually and aurally overpowering, a bloody ballet of machine-gun fire, falling bodies, and exploding shrapnel choreographed for maximum visceral impact. Orson Welles proclaimedCross of Iron one of the greatest antiwar films ever made.
Saturday, April 2, 8:45pm 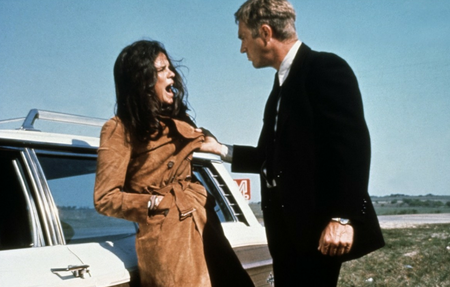 The Getaway
Sam Peckinpah, USA, 1972, 35mm, 122m
Adapted by Walter Hill from a novel by pulp poet Jim Thompson, this taut action joyride is a tour de force of sustained suspense. Sprung from prison by a shady parole officer, ex-con “Doc” McCoy (Steve McQueen) gets roped into a botched bank job, which sends him and his wife (Ali MacGraw) on a blood-spattered dash across Texas, with $500,000 and a shotgun in tow. Peckinpah masterfully keeps the tension escalating over what is essentially an ultra-elaborate, ingeniously conceived extended chase sequence that takes the couple from a white-knuckle pursuit on a train to a perilous ride in the back of a garbage truck to the bullet-riddled climax in a hotel. The film’s unrelenting sense of momentum is enhanced by Quincy Jones’s propulsive prog-jazz score. Print courtesy of the Academy Film Archive.
Monday, April 4, 6:30pm

Junior Bonner
Sam Peckinpah, USA, 1972, 35mm, 100m
The director’s gentlest, most relaxed exploration of the changing values of the American West is this reflective, warmhearted character study starring Steve McQueen as the eponymous rodeo star whose waning career brings him back to his hometown of Prescott, Arizona. There, he clashes with his ruthlessly ambitious brother who has sold the family home, leaving his shiftless father (Robert Preston) and world-weary mother (screen legend Ida Lupino) adrift. Though the visceral bull-riding scenes have the same visual dynamism as Peckinpah’s celebrated action sequences, this mellow modern-day Western reveals Peckinpah to be not only a master visual stylist but also a keen observer of human nature.
Monday, April 4, 9:00pm
Tuesday, April 5, 6:30pm

The Killer Elite
Sam Peckinpah, USA, 1975, 35mm, 122m
Peckinpah takes a paranoid ’70s conspiracy thriller premise and plays it with a hearty dose of absurdist comedy in this offbeat espionage caper. James Caan stars as an agent-for-hire employed by the CIA, whose career is nearly ended when he’s shot by his double-crossing partner (Robert Duvall). But after a little kung-fu physical therapy, he makes a remarkable comeback and is assigned to protect a Japanese politician being targeted by none other than his old nemesis. Peckinpah’s only urban-set film, The Killer Elite makes striking use of San Francisco locales: a shootout in Chinatown, a tense getaway along the Embarcadero Freeway, and, in the delirious finale, a ninjas vs. machine guns showdown aboard a docked warship in the former Naval Shipyard.
Thursday, March 31, 4:00pm

Major Dundee
Sam Peckinpah, USA, 1965, DCP, 136m
An ambitious attempt to push the Western in bold new directions, Major Dundee is a fascinating bridge between the nostalgic mythmaking of the studio era and the nihilistic fury that would emerge full force in The Wild Bunch. Charlton Heston delivers a commanding performance as an obsessive Civil War–era Union cavalry officer who drags a ragtag group of recruits—including a band of unwitting Confederate prisoners—on a doomed journey through Mexico in single-minded pursuit of an Apache warrior. Famously compromised by producer interference that left key footage on the cutting-room floor, Major Dundeelanguished for decades as one of film history’s great “what-ifs?” until a 2005 restoration brought it closer than ever to Peckinpah’s majestic original vision.
Saturday, April 2, 6:00pm

The Osterman Weekend
Sam Peckinpah, USA, 1983, 35mm, 103m
Adapted from a novel by Robert Ludlum, Peckinpah’s final film is a delirious conspiracy thriller set in a world of Cold War paranoia and omnipresent surveillance. The labyrinthine plot involves a television journalist (Rutger Hauer) who is recruited by a CIA agent (John Hurt) to ensnare three of his friends—believed to be KGB spies—during a weekend getaway. Flashes of Peckinpah’s stylistic pyrotechnics—an electrifying car chase edited with whiz-bang bravura, a bullet-riddled nighttime shootout around a flaming swimming pool—light up this wild thrill ride, which is also a prescient look at the rise of surveillance culture. Screens within screens abound, trapping the characters in a web of CCTV cameras and heightening the pervasive sense of disorientation.
Sunday, April 3, 2:00pm
Thursday, April 7, 9:00pm

Pat Garrett and Billy the Kid
Sam Peckinpah, USA, 1973, 35mm, 122m
In his final Western, Peckinpah casts the killing of Billy the Kid as one of the defining death knells of the mythic Old West. James Coburn stars as the grizzled outlaw-turned-lawman Pat Garrett, hired by a group of wealthy cattle barons to track down his former friend, the boyish bandit Billy the Kid (Kris Kristofferson). Gorgeously shot in muted, dust-caked tones, Pat Garrett and Billy the Kid is a somber, slow-burn elegy for the pre-capitalistic freedom of the American frontier and one of the defining revisionist Westerns of the 1970s. The supporting cast includes Bob Dylan (who wrote the music for the film) as an enigmatic drifter.
Sunday, April 3, 9:00pm
Thursday, April 7, 4:30pm

Ride the High Country
Sam Peckinpah, USA, 1962, 35mm, 94m
Peckinpah’s second—and arguably first great—film is a magnificent ode to the waning West. Joel McCrea and Randolph Scott (in his final screen appearance) are two-thirds of a trio of tough hombres hired to transport a shipment of gold from a rough-and-tumble mining town—but things don’t unfold quite according to plan. The presence of the two veteran Western stars in the twilight of their careers connects Ride the High Country to the classic oaters of the studio era, while Peckinpah’s modernist sensibility—seen in the pungent depiction of the debauched miners’ camp and the brilliantly choreographed, bullet-riddled climax—points the way toward the revisionist Westerns to come.
Thursday, March 31, 6:30pm
Friday, April 1, 4:30pm 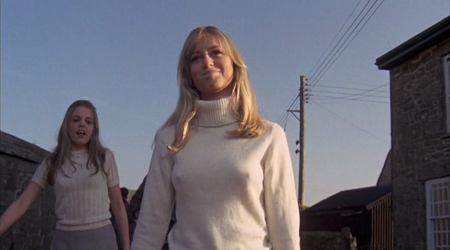 Straw Dogs
Sam Peckinpah, USA/UK, 1971, 35mm, 117m
This harrowing investigation of trauma, violence, and victimization is one of the most controversial films of the 1970s, as well as one of the most frighteningly effective thrillers ever made. Dustin Hoffman gives one of his finest performances as a mild-mannered American mathematician who moves with his British wife (Susan George) to a drab town in the Cornish countryside where they endure escalating humiliations from the hostile locals—culminating in a horrifying home invasion and a night of shocking violence. The darkest and most disturbing of Peckinpah’s films, Straw Dogs also contains some of the director’s most accomplished filmmaking. His control over the steadily mounting dread and ability to suggest violence lurking at every turn are Hitchcockian in their mastery.
Friday, April 1, 6:30pm
Thursday, April 7, 2:00pm

The Wild Bunch
Sam Peckinpah, USA, 1969, 35mm, 145m
The film that jolted the fading Western genre back to life, Peckinpah’s breakthrough work explodes the myth of Old West honor in a blast of bullets and bloodshed. In 1913, a gang of aging outlaws, led by Pike (William Holden), live (and die) by their outdated moral code as they pull one last job—stealing a shipment of guns for a brutal Mexican general—while being relentlessly pursued by a steely bounty hunter (Robert Ryan). The hallmarks of Peckinpah’s revolutionary visual style—the falling bodies, slow-motion deaths, fractured editing that expands space and time—are all on display in the film’s stunningly nihilistic, blood-spattered climax, which inaugurated a new era of cinematic violence.
Thursday, March 31, 8:30pm
Friday, April 1, 1:30pm