Variety reports that Luc and Jean-Pierre Dardenne are re-editing their Cannes Competition film "La Fille Inconnue" ("The Unknown Girl") in response to negative by a group of mostly non-corporate film critics.

Here's evidence that critical reviews can be used in concrete ways in the filmmaking process. I commend the Dardennes for taking honest criticism to heart in an effort to improve this currently flawed film.

However, I don't have high expectations for their efforts due to the miscasting of the film's lead actress.

ScreenDaily reported that the updated version of "The Unknown Girl" is "seven minutes shorter and includes as many as 32 changes."

For the record, here is my review:

Cannes, France —Few things are as embarrassing than having a flop in the competition at Cannes. The trouble with the Dardenne brothers is that they probably won't get the memo about just how awful their latest cinematic offering is. 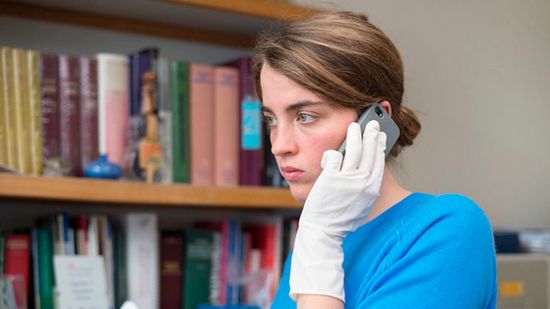 It does a disservice to cabbage to compare the vegetable to Adele Haenel’s dreary portrayal of Jenny, a doctor turned amateur investigator after a black girl is murdered near her character’s one-woman medical practice. In American parlance, you would call Jenny a "pill." Melancholic, moody, and clinically depressed are other terms that apply.  That same labels could be applied to the miserable personality of every character in "The Unknown Girl." The social mood of the picture is so oppressive that you'll never want to visit Belgium after seeing it.

The premise for the story is as tedious and overwrought as they come. It's clear that Jenny (Haenel) doesn't know the first thing about managing employees from the atrocious way she treats her only assistant. It's no wonder that he quits 10 minutes into the film. From her actions, we also know that Jenny isn't fit to practice medicine. A young black girl desperately knocks on the door of Jenny's practice after hours. Jenny ignores the girl, and refuses to let her in. Perhaps she harbors a tad of racism. The next day the black girl turns up dead. Now, suddenly Jenny grows a conscience. She feels more guilt than a Catholic schoolgirl after borrowing her mother's vibrator. Jenny blames herself for the girl's death, and goes all Columbo even after a police investigator tells her she's crossing the line. That's the artificial set-up for a movie that may as well have no protagonist at all. Death comes with the territory of being a doctor. If Jenny can't handle the passing of someone who wasn't even a patient, just imagine how she'll respond when loses one.

The Dardennes have created a new sub-genre. You’ve heard of neo-realism; well “The Unknown Girl” is neo-fakeism. This is cinema to slit your wrists to.