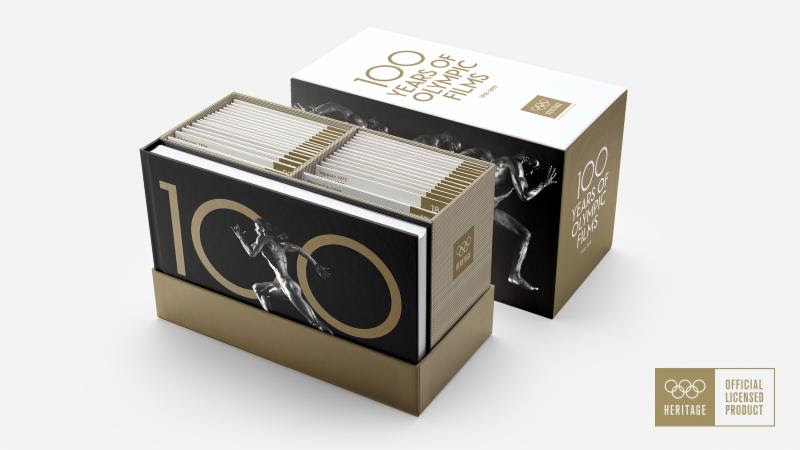 We are pleased to announce Criterion's upcoming release of 100 YEARS OF OLYMPIC FILMS. Spanning fifty-three movies and forty-one editions of the Olympic Summer and Winter Games, this one-of-a-kind collection assembles, for the first time, a century's worth of Olympic films - the culmination of a monumental, award-winning archival project encompassing dozens of new restorations by the International Olympic Committee.
These documentaries cast a cinematic eye on some of the most iconic moments in the history of modern sports, spotlighting athletes who embody the Olympic motto of "Faster, Higher, Stronger": Jesse Owens shattering sprinting world records on the track in 1936 Berlin, Jean Claude-Killy dominating the slopes of Grenoble in 1968, Joan Benoit breaking away to win the first-ever women's marathon on the streets of Los Angeles in 1984.
In addition to the work of Bud Greenspan, the man behind an impressive ten Olympic features, this stirring collective chronicle of triumph and defeat includes such landmarks of the documentary form as Leni Riefenstahl's Olympia and Kon Ichikawa's Tokyo Olympiad, along with lesser- known but captivating contributions by major directors like Claude Lelouch, Carlos Saura, and Milos Forman. It also serves as a fascinating window onto the formal development of cinema itself, as well as the technological progress that has enabled the viewer, over the years, to get ever closer to the action. Traversing continents and decades, and reflecting as well the social, cultural, and political changes that have shaped our recent history, this remarkable marathon of films offers nothing less than a panorama of a hundred years of human endeavor.
BLU-RAY AND DVD SPECIAL EDITION COLLECTOR'S SETS FEATURE
* 53 newly restored films from 41 editions of the Olympic Games, presented together for the first time
* Landmark 4K restorations of Olympia, Tokyo Olympiad, and Visions of Eight, among other titles
* New scores for the silent films, composed by Maud Nelissen, Donald Sosin, and Frido ter Beek
* A lavishly illustrated, 216-page, hardcover book, featuring notes on the films by cinema historian Peter Cowie; a foreword by Thomas Bach, President of the International Olympic Committee; a short history of the restoration project by restoration producer Adrian Wood; and hundreds of photographs from a century of Olympic Games
HIGHLIGHTS FROM A CENTURY OF OLYMPIC FILMS
Stockholm 1912
The Games of the V Olympiad Stockholm, 1912 (dir. Adrian Wood)
Berlin 1936
Olympia Part One: Festival of the Nations (dir. Leni Riefenstahl)
Olympia Part Two: Festival of Beauty (dir. Leni Riefenstahl)
Cortina d'Ampezzo 1956
White Vertigo (dir. Giorgio Ferroni)
Tokyo 1964
Tokyo Olympiad (dir. Kon Ichikawa)