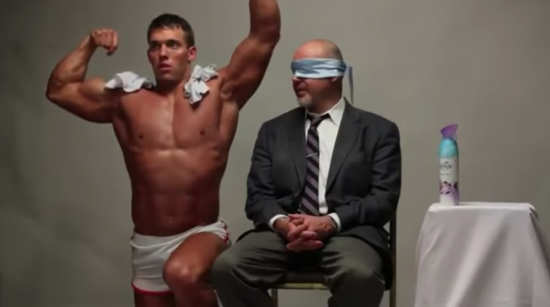 I suppose it was sometime in 2012 when I got cast in a Fabreze commercial. I'd come from a screening, and was walking through what's known as 6 1/2 Avenue in Midtown Manhattan when I was approached by a casting person to walk blind into a filming session on the spot.

Little did I know it was for Fabreze. Although my spot didn't get picked up for national airplay, it was shown at the Cannes Lions International Festival of Creativity. The pay was great for my 15 minutes of effort.

It did make for very funny image.

Posted by Cole Smithey at 7:51 PM in Comedy | Permalink

Wes Anderson’s stop-motion animated film ‘Isle of Dogs’ (featuring the voices of Bryan Cranston and Tilda Swinton) will premiere at the 2018 BERLIN FILM FESTIVAL on February 15. From the trailer, this looks like vintage Wes Anderson — kooky dry humor with an international bent of globalization. Yum.

Tina Fey hits it out of the park on this one! Wow!