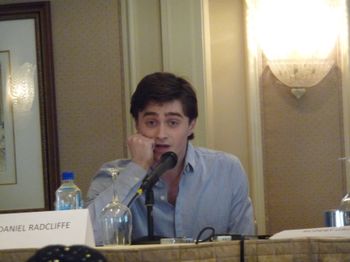 Teen desire and romance hits Hogwarts like a contagious virus in the sixth Harry Potter film, and goes a long way to providing lightheaded contrast to the skullduggery being perpetrated by Severus Snape (Alan Rickman), Draco Malfoy (Tom Felton), and three supernatural Death Eaters that swirl around the story like exterminating angels of the apocalypse. For their part, the actors have all aged well into their familiar roles, with Daniel Radcliffe showing evermore confidence in playing the "Chosen One" with a reserve of humor and restrained emotion. It's yet to be seen what kind of monster-in-a-box the Potter films will make of Radcliffe as an actor but it seems certain, based on his Broadway performance in "Eqqus," that more surprises are in store.

I had the opportunity to ask the energetic young actor some questions at a press conference at the Waldorf Hotel in midtown Manhattan.

CS: What's the biggest change in Harry Potter for this movie?

DR: The big change for Harry this year is his relationship with Dumbledore. Previously, it's always been very much teacher and student, and this year it changes to his being the general's favorite leftenant. Harry becomes a foot soldier, and happy to be so. Also, in all of the other ones [movies], you always see Harry as being, "We're going to get Voldemort. We're gonna get him and kill him." But he never really does anything towards it, whereas this year he's actually being pro-active and sort of planning, and actually trying to do something toward the destruction of Voldemort.

CS: Has it set in that your time with Harry Potter is ending?

DR: For me, it hadn't until this week when everyone is telling me that it's almost over. I was actually kind of getting along quite nicely until everyone said, "Well, your dream's coming to an end."

We've got a year left on "seven," and then we've got to do a lot of publicity twice more. So there's a long way to go.

CS: How do you weather the world of dating?

DR: I don't feel like I'm in the world of dating. I don't have that sort of life. I'm working, and I'm happy to be working. It's not the case that I don't have time to have a girlfriend--I do. It's weird because people sometimes ask, "What's it like to be Harry Potter? Does it help you get girls?" I was like nine when I started doing Harry Potter, so I don't know what it's like to get girls without having the aid of being Harry.

CS: After doing Equus on Broadway, do you have any other plans for returning to the boards?

DR: No, nothing specific. But I would love to be back on stage in the next two or three years. There's nothing planned at all, but obviously I'd love to do something in England, and if Broadway would have me back then that would be incredible because I had an amazing time here [in New York].

CS: Can you tell me about shooting the scene where you lose Dumbledore?

DR: It was a hard scene for me because at the time of filming, I had never lost anyone close to me. You can never hope to imagine what that must feel like. I was, in a way, having to imagine the feelings, and if it came within even a third of the way close to being real then I'm happy with that, to be honest. In terms of losing Dumbledore in the series, it's very sad for me because I won't get to work so much with Michael [Gambon] in the seventh film. I'll miss him because we have a great time together.

CS: Are you able to go back and watch yourself in the previous Harry Potter movies?

DR: I haven't watched any of the films after they'd been done. I think it would be an almost entirely destructive experience for me. I would  just become far too critical. I remember we were having a conversation on the fourth film and I said something to Emma like, "I saw a clip from the first film the other day. I can't believe how bad I am in it. Why on earth did they cast me?" The only reason I remember that it was on the fourth film that we had this conversation was because Mike Newell's massive booming voice from the other side of the set came back, [in a false scream] "Because you are absolutely bloody charming."

CS: There's plenty of sexual tension in the film. What's your personal take on that kind of tension as a narrative element?

DR: With Harry, I find it very endearing that he's kind of an acclaimed wizard, and he's crap with women. I think it's a wonderful, rather endearing quality that he has. I think this film demonstrates basically two types of teenaged relationships. One, which is mine and Bonnie's, which is that kind of teenaged thing where you're just in love, and it's pure and innocent, and all that matters in your life. It's when you're 14 or 15 and you fall in love, and it's all there is. And the other kind, which is much more carnal and energetic, and was the one Rupert was lucky enough to have in this film. I think most teenagers have a complete inability to control hormones or desire, and it's no different with wizard children.

CS: How did you go about getting into Harry's more altered state of mind for this movie?

DR: To be honest, I just let the more manic side of myself, that I suppress for 23 hours of every day, loose for awhile on-set and just became a kind of uncontrollable, vaguely irritating, but vaguely amusing person that I keep hidden. It was great fun. It is a side of the character that hasn't been seen before.

If you spent a proper amount of time with me, you would probably wonder if I was on drugs--I'm not. I'm just incredibly hyperactive and manic. I can be quiet and serious at the same time. But at the premiere in England, I was this kind of beast that had been unleashed onto the red carpet. It was incredible.

CS: How is if for you reading the books and knowing that you will eventually play out Harry's actions.

DR: My reading of the books was always one of sort of, "Oh God, there's another one dead. It's another death scene." I would always be able to very much enjoy them when they came out, but I would also get nervous when I would read them about whether I would be able to do justice to certain aspects of them--which is probably not the healthiest mindset to be in when you read them, but I couldn't help it.

CS: Do you plan to continue acting after the Potter films are done?

D.R.: I definitely want to go on acting for as long as I can find employment. I'm never happier than when I'm on a film set. I just want to keep working.

CS: How does David Yates compare to other directors on the franchise?

DR: I have nothing but great things to say about David. We get closer every year. We get on very well off-set. We have a very good relationship, not only professionally but personally as well. As we go on in the films, we get more in tune with each other to the point where he can say "cut," and I will know if what I've just done is what he wanted, simply because I know what he's looking for in a performance. He's very good at being honest with me as well, and saying to me, "You can do better than that." And that's a wonderful thing to have is that kind of trust in a relationship with a director.

Listed below are links to weblogs that reference Daniel Radcliffe on Dating, Broadway, and Dumbledore:

I hope Daniel finds someone who can see past through the Harry Potter thing. That's the danger in doing parts like that; you'll be branded for life as a fictional character. No matter, there's plentyoffish.com in the sea, and I see he's taking his own sweet time.