« THE WEDDING DATE | Main | ETERNAL SUNSHINE OF THE SPOTLESS MIND » 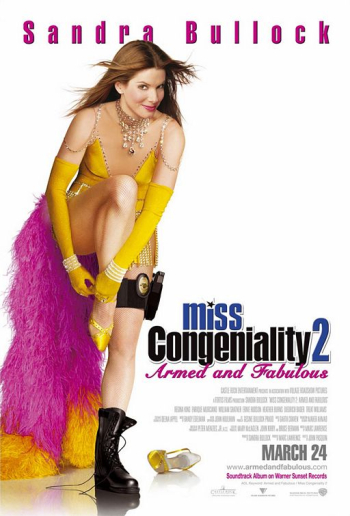 Made to bore airplane passengers to sleep, "Miss Congeniality 2" is a poorly written comedy sequel that teems with miscast secondary characters, a bland wardrobe design, and non-existent pacing. Barely a chuckle sparks as Sandra Bullock returns to her role as Gracie Hart, a quirky FBI agent pressured into extending her notoriety for her undercover transformation to a poised contestant in the Miss United States Pageant four years ago into serving as a public relations mouthpiece for the FBI. Notably missing from the sequel is Gracie’s necessarily amusing transformation process into "the new face of the FBI." Gracie’s FBI spokesperson stint is cut short in order to rescue a kidnapped Miss United States (Heather Burns) along with pageant emcee Stan (William Shatner) in Las Vegas. 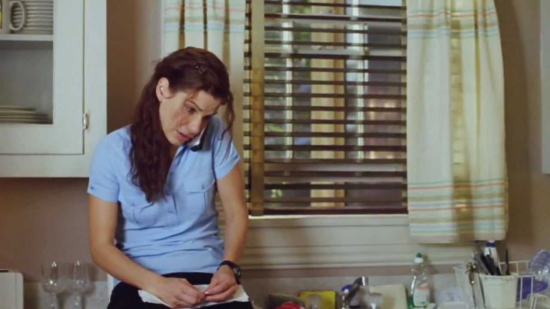 Sandra Bullock is an interesting actress. She’s lovely, quick-witted, and has a silky charm that shrouds her rough edges. She’s capable of terrific comic character work, as evidenced during the film’s best scene when she enters a retirement home disguised as an older wheelchair bound Jewish lady. Bullock works the scene with such verve that you wish she had more disguised characters to play. It’s one time during the movie when the audience gets to relax and be entertained. Unfortunately, the bulk of "Armed and Fabulous" is squandered on hollow plot threads and a forced antagonistic relationship between Gracie and her short-tempered FBI agent bodyguard Sam Fuller (Regina King).

Regina King’s miscast role as a pugnacious FBI agent Sam comes off as especially unflattering considering the admirable dramatic work she did in last year’s "Ray." Director John Pasquin ("Joe Somebody") exacerbates her miscasting by draining away the potential slapstick buffoonery of the repetitive violence that occurs between King’s character and Gracie. When Sam punches Gracie we experience the violence as mean spirited blows that don’t ring as funny. Pasquin’s mishandling of Marc Lawrence’s uninspired script springs from the director’s inability to set a proper comic tempo for the actors to work within. Nearly every scene is paced identically and lays on the big screen like a dried egg on day old toast. At 115 minutes, the dragging movie could have used some speeding up in more than a few places. 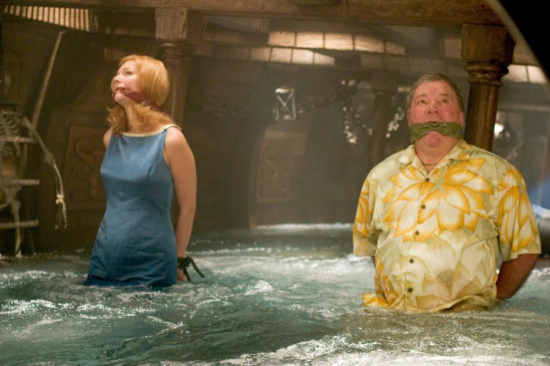 "There’s a cannon in my porthole" is a genuinely funny line that William Shatner gives during an underwater scene in the hull of a pirate ship at Las Vegas’ Treasure Island Hotel. It’s an example of a simple piece of offhand humor that Shatner snaps into colorful life with nothing but inflection and comic intentionality; he’s not even onscreen when he says it. For the tiny part that William Shatner has to work with the actor forever associated as Star Trek’s Captain Kirk adds a spicy flavor to an otherwise bland setting.

"Armed and Fabulous" shows itself as trying too hard to generate an overriding theme when Gracie Hart shows up in an elementary school classroom to impart the value she places on "world peace." In a Gene Wilder picture you might have imagined "whirled peas" as something so far-fetched and amusing that you’d have to go on repeating it for days just to scratch the itch of a laugh you felt simmering beneath his deadpan delivery of something so bizarre. That intrusive memory might then have adjusted into a realization that what he really meant was "world peace." But they don’t make too many lively comedies like Gene Wilder’s "Stir Crazy" or "Silver Streak" anymore.