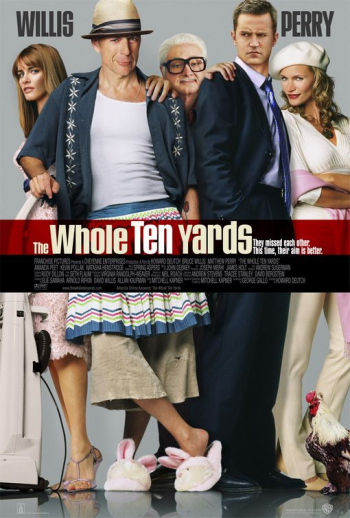 Proof that most sequels should be avoided, "The Whole Ten Yards" vaporizes the humor of its superior 1999 precursor "The Whole Nine Yards." Former cast members Bruce Willis, Matthew Perry, Amanda Peet, Natasha Henstridge and Kevin Pollak return to a world of goofy hit-men wherein retired hitman-turned-homebody Jimmy (Willis) has since gone on the lam in Mexico with his hit-woman wife Amanda Peet. Accident-prone paranoid dentist Oz (Perry) seeks Willis’ assistance when his wife Cynthia (Henstridge) is kidnapped by the Hungarian mob. There’s barely a laugh to be had in this miserable pratfall filled goose chase of a movie.

A key ingredient in any funny comedian is a wide streak of self-indulgence. When you think of John Belushi, Richard Pryor, Peter Sellers, or even younger funnymen such as Tom Green or Jim Carrey, you’re immediately hit with their shameless and utter commitment to their actions. Sadly, this golden comedic trait is missing from the entire cast of "Ten Yards." It’s not enough to introduce Bruce Willis as an apron-wearing bitchy househusband without the actor’s essential raw attraction to that disguise.

Supposedly, Jimmy "The Tulip" Tudeski is attempting to confuse his wife, and the outside world, into believing that’s he’s lost his mind so that he can surreptitiously pull off a scheme to rob the father of one of his last hits. Kevin Pollak plays Lazlo Gogolak, the kooky Hungarian mob boss that Jimmy conspires to rook, and he comes the closest to creating a ‘funny’ character except he falls short by constantly waiting for his comic bits to connect. You can see him gauging his own amusing effect as he mispronounces words in a faux Hungarian dialect that telegraphs his intention. No matter how many times he slaps his underlings in the face, it’s never funny because he doesn’t dare to take any risks with his savageness. 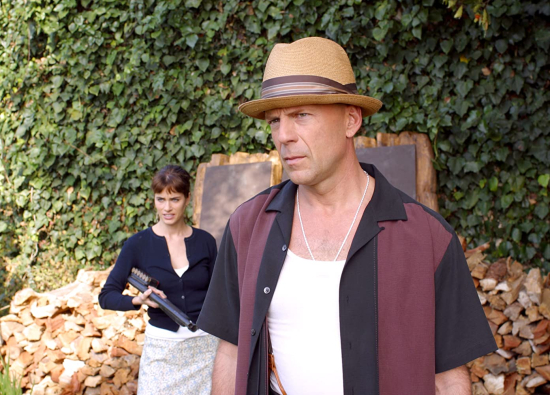 Jimmy’s wife Jill (Amanda Peet) is an assassin in training but she still hasn’t committed a clean hit. One of the best scenes in the movie is a flashback of Jill’s last job where she ‘twitched’ when a phone rang in her victim’s hotel room and she knocked his spaghetti dinner on the floor before he arrived. Her prey ended up taking a dive out of the window without Jill ever firing a shot. The scene played with a zing because there was a precise amount of suspense, context and sudden violence that quickly shifted to dissatisfaction. It also gave the relationship between Jimmy and Jill a focus that never returns in the movie.

The burden of comedy in "Ten Yards" rests on Matthew Perry’s large shoulders for his wealth of television experience from the "Friends" series. One could argue that Bruce Willis is the film’s leading character, but Willis is too lazy to trifle with the energized mockery needed to anchor a feature length comedy. For his part, Perry takes so many pratfalls that you begin to wonder at how much real pain he might have suffered for so little comic reward. Director Howard Deutch ("Grumpier Old Men") neglects giving Oz’s itinerant stumbling any set up. Instead of allowing the audience to see the banana peel that will miraculously attract Oz’s left foot, we are besieged with his ceaseless head banging into doors and walls. The results are never funny and wear on the audience as much as Bruce Willis’ interminable whining and crying that he indulges in over his perpetually heartless treatment of Jill.