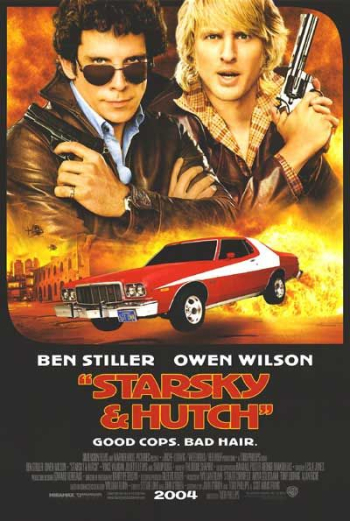 Snoop Dogg revises the role of Huggy Bear (originally played in the TV series by Antonio Fargas). Will Ferrell elicits laughs as a prisoner with a penchant for odd visual arousal. Set in a fictional town called Bay City, the movie makes great physical use of its cast. Better than the Charlie's Angels movies for its cohesive tone "Starsky & Hutch" is a bawdy ride. Unfortunately, if you've seen the over-exposing trailer, then some of the film's best jokes are spoiled. But if you're going into the movie cold, you'll have the pleasure of being surprised by some perfectly set up comic gags that hinge on Wilson's and Stiller's jittery alliance of straight man/funny man routines.

Stiller's Starsky is a tightly wound undercover cop who takes his job and driving way too seriously while Wilson's Hutch is a late-sleeping skirt chaser with little more on his mind than having a good time, all of the time. The duo's unpredictable camaraderie sometimes slips into naive homoerotic territory as when the two cops wear hand towels around their waists while shaving side by side in their precinct locker room. This comic thread finds its zenith when Starsky mistakenly takes a large dose of odorless cocaine and enters a madcap disco contest that tests all sorts of social boundaries. Stiller exploits the opportunity to push his talent for physical comedy to its utmost while Hutch and their dates (Amy Smart and Carmen Electra) look on in disbelief. 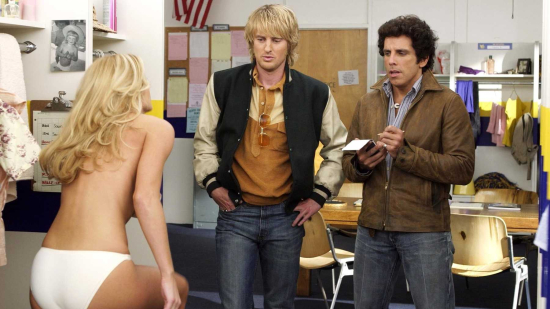 Screenwriter Scot Armstrong ("Road Trip" and "Old School") invents a new variety of comic revelation by pulling back just when you expect him to go for the kill. The film's neutered violence reflects the coded mores of '70s era television, with a dose of "Pink Panther"-infused humor tossed in to extend the energy of the scenes. Comic allusions from "Easy Rider" put Starsky and Hutch in a motorcycle bar where their ill-fitting disguises set off a fistfight that confirms their ass-kicking status, even if their undercover shtick is far less convincing.

Director Todd Phillips taps into an innocent brand of foolishness to push the comedy and the action. The protocol casting of Vince Vaughn as the alcohol lubricated family man/drug lord works well due to Vaughn's genuinely intoxicated take on his volatile character. Snoop Dogg hits another movie homerun with his evenhanded take on Huggy Bear as a sleek dude with more trust in his '70s hairdo than Peter Jackson had in winning an Oscar for "Lord of the Rings."