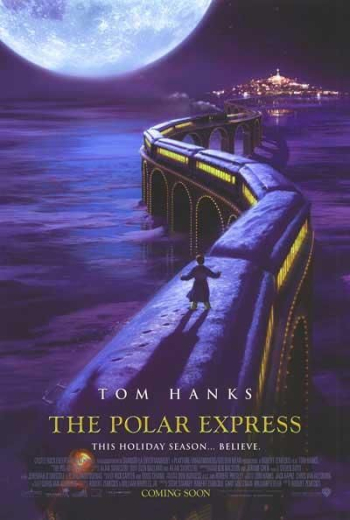 Just seeing Tom Hanks’s name attached to an animated Christmas movie directed by Robert Zemeckis ("Forrest Gump") should be enough to let audiences to know all they need about the kind of cheesy entertainment they’re in for. Creepy looking "performance capture" computer generated animation transposes artist/author Chris Van Allsburg’s roller-coaster-ride story about a steam train called "The Polar Express." The train takes a group of kids to the North Pole on Christmas eve to meet Santa Claus. The locomotive goes up a steep mountain and down an even steeper mountain as it puts a cynical 8-year-old boy with no name in the way of cliffhanger dangers that provide plot filler until Santa’s Christmas metropolis is shown in all of its industrial splendor. The entertainment hook for the movie is the fact that Tom Hanks plays multiple roles. Hanks plays the little boy, the boy’s father, the train conductor, a hobo ghost, and Santa Claus. With a price tag of $165 million dollars, you’d think Zemeckis could afford an actual cast.

"The Polar Express" boasts a new GCI technology designed to replicate human movement by digitizing an actor’s performance. But the results are expressionless mannequins that move with an odd fluidity that seems somehow uncontrolled or uncontrollable. Added to this plastic distancing effect is the fact that none of the characters, except Santa, have names. Even then only four mannequin-kids are afforded any trace of personalities. We have the all-American white "hero boy," an African American "hero girl," a generic European immigrant "Lonely Boy," and a "Know-It-All Boy," (a stereotypical Jewish kid) who rounds out the group’s cultural diversity quotient.

You don’t have to look far to see the cogs of fascist indoctrination at play in the execution of the story. The train conductor gives each of the children on his train a ticket for passage which he later insists on demanding so he can punch it with initials that will later turn into words for each child to live by. But when Mr. Conductor goes to collect the ticket belonging to the nameless little African American girl (Nona Gaye), she has misplaced it and must be escorted away, allegedly, to be ejected from the train by the suddenly judgmental (read deceiving) conductor. Keep in mind that all of the children are dressed only in pajamas and slippers. This is just one example of the many layers of uncomfortable subtext buried in the film’s scenario. Since the conductor gives the children their tickets to begin with, his pretense at punishing the only minority on the train for not having hers seems a subterfuge for some unsavory plan. 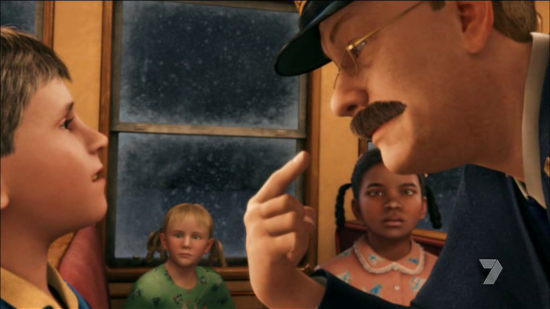 The next time we see the girl, several scenes and many minutes later, she is in the engine car with the driver and stoker who have given her a lesson in which red lever makes the train stop. The cruel metaphors at play in the movie may be accidental on the part of the filmmakers, but they would not be there in the first place if more attention had gone into telling a well-written story. "The Polar Express" is about encouraging arrested development. Sure kids should believe in Santa Clause until they’re old enough to figure out the ruse and make up their own minds about what other kinds of games they want to play with their imaginations.

Even when you look past the unnecessary dangers that the dehumanized child characters in "The Polar Express" experience, you're left with a hammered-home theme that says you must believe in a lie in order to be satisfied on a personal level. A problem comes from the boy we meet in the beginning of the movie who is on the brink of maturing and exerting his individuality. We, the audience, are supposed to cheer as we watch him backslide into a dream state that more closely reflects a nightmare vision than any scenario of protected domestic life. "The Polar Express" isn’t smart enough to be effective propaganda, but it can’t hide its cold agenda of labeling people (children) with words that will distract them from the seduction they’ve encountered. This polar express is one cold friggin’ ride.

Posted by Cole Smithey at 06:30:00 PM in Animation, Children, Fantasy