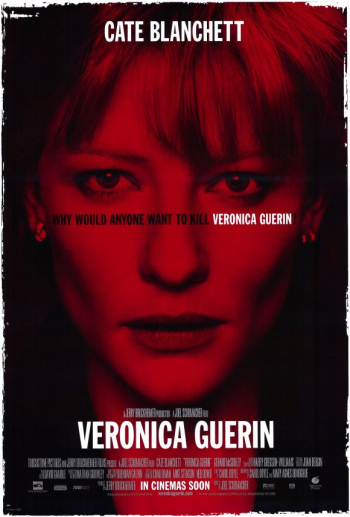 This earnest biopic about Irish newspaper journalist Veronica Guerin (pronounced ‘gear-in’) paints a vivid portrait of the courageous and irrepressible woman responsible for bringing down Dublin’s drug barons during the mid-1990s. Cate Blanchett gives a tour de force performance as Veronica Guerin under Joel Schumacher’s direction of a no-nonsense script by Carol Doyle and Mary Agnes Donoghue. The dangers of journalism and its ability to affect social change are at the heart of this brutal story of one woman’s personal crusade against the criminals who oppressed Dublin with violence and drugs. Her tragic assassination instigated legal changes that sent her "untouchable" killers to prison. 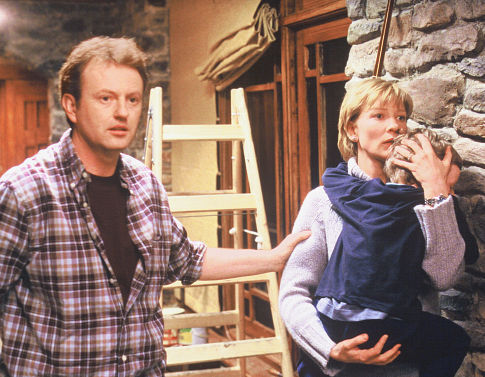 The striking image of Cate Blanchett’s confident red-tinted face on the ubiquitous poster for "Veronica Guerin" speaks volumes about the depth of character that Ms. Blanchett embodies in her intimate portrayal. The challenging stare, chiseled cheekbones, and slightly lopsided hair belong not to Cate Blanchett, but to Guerin’s ardent countenance. The immediacy and quickness of Blanchett’s performance flows like hot mercury. Blanchett’s casting in the role is intrinsically substantial in preventing "Veronica Guerin" from becoming an unpleasant cadaverous exercise of a history lesson that many audiences would rather avoid. Instead, the Australian born actress grapples with every thread of selfish and selfless motivation behind her character’s bold actions, thereby enabling the audience to gauge the magnitude of Veronica Guerin’s singular personality. 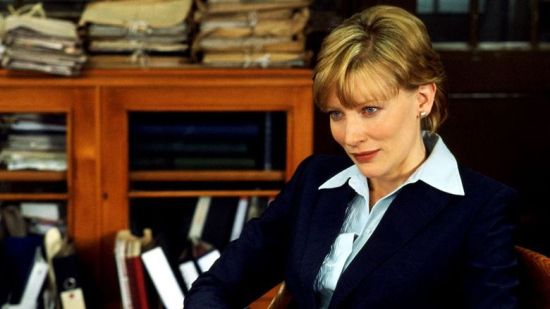 We know from the film’s opening sequence that Guerin will be gunned down at the end of the story. The steps leading up to that tragic moment are covered in close detail.

The setting is a heroin-corrupted Dublin where a young female journalist became an instrument of justice through her unflinching desire to expose the kingpins at the bottom of the city’s corruption. As Guerin interviews teenaged heroin addicts and various criminals, she leverages her closest underworld source John Traynor (Ciaran Hinds) by feeding his celebrity-hungry ego with articles in the "Sunday Independent" newspaper that slyly provoke public attention to the drug crisis at hand. 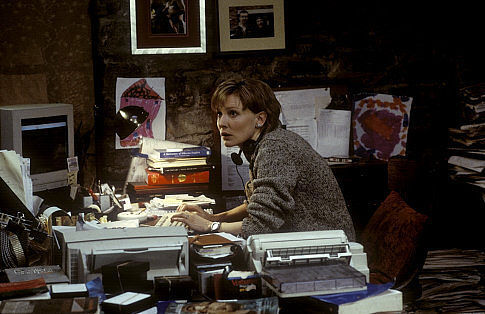 But when Guerin points at guilt in an erroneous direction in one of her articles, she realizes that Traynor is misleading her in order to conceal a reclusive career criminal named John Gilligan (menacingly played by Gerard McSorley). Guerin’s loyalty to her civic roots causes her to put her investigation before her own safety and that of her husband and child. Her brave actions raise the most challenging ethical questions of the story. 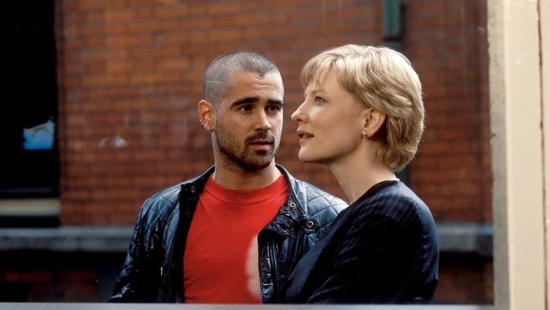 Veronica Guerin, it seems, understood that she would sacrifice her life in order to effect legal changes. She was desperate to put Dublin’s drug lords behind bars. She risked herself and her family in a gamble that few people would recognize as sensible, or even necessary to bring about transformation. But her story is much more than a cautionary tale about why people should or shouldn’t take aggressive action against seemingly all-powerful institutions of corruption. The point made is that there will always be certain men and women willing to take a stand against injustice, and no amount of intimidation or abuse will distract them from their humane quest. Thanks to Cate Blanchett’s fearless portrayal, audiences can be suitably introduced to an authentic Irish heroine who demanded answers that no one else had the guts to solicit. The effect is remarkable.