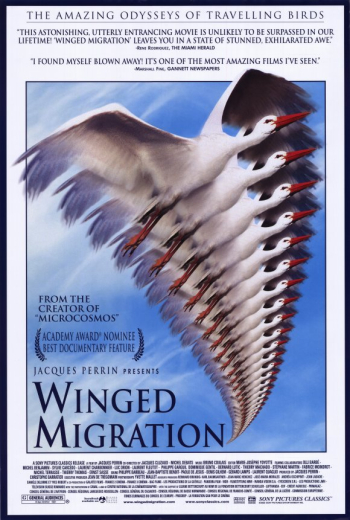 The Oscar-nominated "Winged Migration" is a virtuosi technical achievement in documentary filmmaking due to its astonishingly intimate photography of the migrations of numerous species of birds across the earth’s northern and southern hemispheres. Actor-turned-director Jacques Perrin (actor in "Z," and director on "Microcosmos") utilized a crew of 450, and a dozen cinematographers with camera-fitted ultralight aircraft, gliders, helium balloons, and remote-controlled models in recording the tight formation in-flight journey of ducks, geese and nearly 50 other species of birds during their biannual migrations. The film gives a rare birdseye assessment of our planet with bird migrations that travel up to 12,000 miles. However it fails to inform much about the varied species of fowl on display. Winged Migration’s heavy-handed soundtrack of new age music by Bruno Coulais becomes an annoyance to be tolerated. The film's provincial bookend beginning and end seems prosaic in the face of an otherwise inspired cinematic achievement.

It’s clear that Winged Migration’s screenwriters Stephane Durand and Jacques Perrin have an ecological agenda by the amount of attention they give to scenes of birds suffering in the wake of man’s excesses. But some of that plethoric suffering comes at the provocation of the filmmakers themselves. At the end of a long exhausting journey, a flock of ducks become prey for a group of hunters, whom we discover in the film’s closing credits were the filmmakers themselves. This movie was definitely not approved by any animal rights organization. The disclosure of its staged cruelty deflates some of the film’s exhilarating effect. Although "Winged Migration" begins with a blurb informing us that "no special effects were used" in composing the film, many of the situations on display were staged, and various liberties were taken in the editing room to orchestrate circumstances that never occurred in any real time. 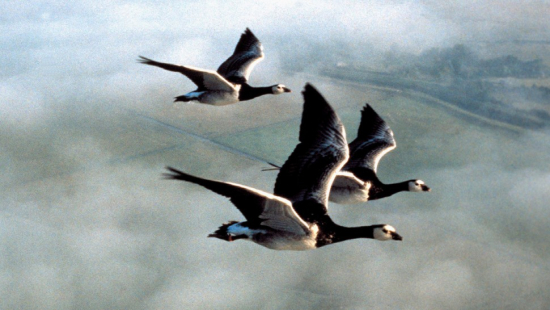 Jacques Perrin performs the documentary’s voice-over narration to the detriment of the film due to a thick French accent that teeters on being indecipherable at times. Thankfully, there isn’t much verbal description to be had as the camera switches between tracking different bird species without ceremony or comment. There is something profoundly amateur in the way the film reduces the life cycle of birds into a crash course on migration. We watch birds battle against fierce rainstorms, get stuck in toxic chemical sludge, and fall pray to bloodthirsty crabs. But we aren’t given a sufficient context to allow for much empathy. The movie is both too much and not enough at the same time. There are far too many species of birds (an already notoriously disagreeable lot in the animal kingdom) to feel connected to their specific migratory lifestyle, and not enough information is given to support the encyclopedic number of birds on display. 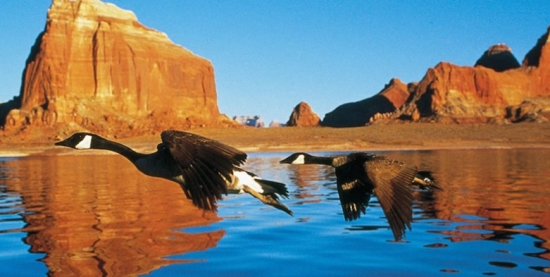 "Winged Migration" is a documentary that has been greatly overhyped because of its groundbreaking camera techniques. But after twenty minutes the novelty wears off and you’re left to ponder the clunky execution of the movie as a whole. The film could easily have been the cleansing meditation about the interaction between man and birds, that the filmmakers intended if Perrin had focused on two divergent species of birds to follow, and eschewed narration and musical embellishment. This not only would have served the film’s overstated ecological agenda better, but it would also have greatly reduced the film’s four-year production schedule.

The movie starts with a young boy releasing a goose from a fishing net in a pond somewhere in rural France. It ends with the boy returning to the pond to see the goose with a bit of the same netting still stuck on his foot. The goose represents a protagonist that got lost from the story while a bunch of other birds stole the show. As for the little boy, he didn’t do such a good job of unfettering the goose after all.