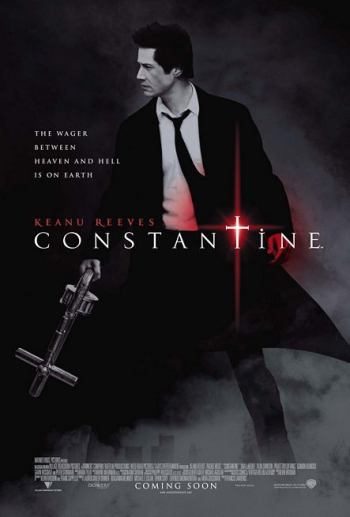 Keanu Reeves plays the chain-smoking post-modern exorcist John Constantine, of the DC Comics "Hellblazer" graphic novels, in an overlong movie that falls between last year's terrible "Van Helsing" and its far more adept rival "Hellboy." Constantine's youthful attempt at suicide, to escape his innate ability to recognize angels and demons, leaves him wandering a noir-styled Los Angeles realm that's caught between heaven and hell. He attempts to earn salvation into heaven by exorcising demons and sending them back to their scalding fountainhead. The specious suicide of police detective Angela Dodson's twin sister (both played by Rachel Weisz) draws Constantine into an investigation that calls for him to repeatedly cross over into the depths of hell to save a soul similar to his own.

Impressive special effects don't compensate for the film's muddled plot and inarticulate dialogue, but the source material's dark tone is consistent. Peter Stormare relishes with infectious glee his turn as a tar-footed Satan.

In a scene that exemplifies the film's droll humor, Angela (Weisz) asks Constantine if she has to take her clothes off before getting into a bathtub filled with water and from which he will navigate her temporary passage into the depths of hell. Constantine takes a long pause before answering Angela's query with, "I'm thinking." The inherent burlesque in his remark is suppressed when he restrains Angela beneath the water's surface as she struggles. Shocking results follow.

Visual surprises take hold as Constantine's date with death approaches; he's dying from lung cancer. Accomplished music video director Francis Lawrence (Will Smith's "Black Suits Coming") connects the narrative with lushly framed sequences of phantasmagoria that challenge gravity. They also expose the script's lack of backstory that might help explain the spectacle. When Constantine is attacked on a dark Los Angeles street by an enormous demon made up of swarming bugs, we're left to wonder at how a never-glimpsed insect, that Constantine keeps concealed in a matchbox, could reduce the creature to a lesser sum of its crunchy parts.

To its credit, "Constantine" carries a pointedly anti-smoking theme that's emphatically pronounced during a physical interaction between Lucifer and the black-lunged Constantine. There are obvious similarities between Constantine and the "Chinatown's" cigarette-smoking Jake Gittes (played by Jack Nicholson). Constantine depends on his dedicated taxi driver Chas (Shia LaBeouf) to transport him around Los Angeles when he isn't walking. The plot device also matches up with "Chnatown" wherein Gittes was relegated to depending on others for transportation around L.A. after his car was destroyed. In both movies, a woman who openly conceals aspects of her identity, pulls the central character into an investigation of colossal ramifications. Even the poster for "Constantine" is an homage to the famous ad sheet for "Chinatown." 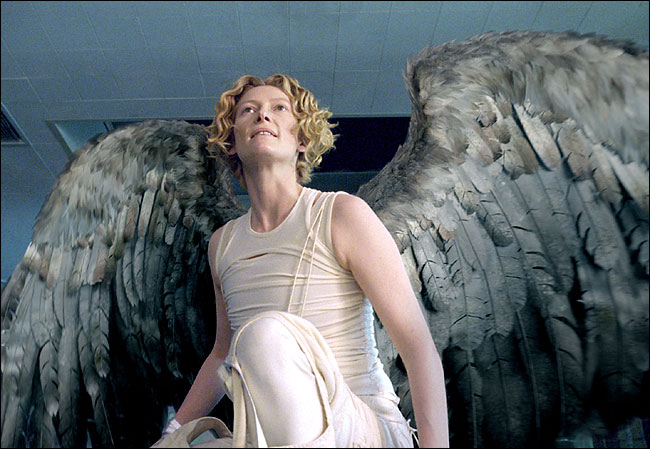 Yet the supporting actors in "Constantine" are nowhere near the stellar quality of the secondary performers in Polanski's film. Pruitt Taylor Vince is an actor who's mucked up nearly every movie he's been in. Vince is painfully unconvincing as a frail priest here. Shia LaBeouf is meant to provide a comic "Tonto" to Constantine's deadpan "Lone Ranger," but he's too unskilled as an actor to bring guts to the part. Tilda Swinton plays an androgynous Gabriel. She shifts the movie into faulty camp territory whenever she's onscreen. Since her gender-switching role in "Orlando" (1992) Swinton has been the go-to Peter Pan prince of androgyny. Her bent here as the angel Gabriel feels like a wandering stepchild adopted from some unknown Wim Wenders movie. Some of that influence hails from the costume designer's obvious nod to Wenders's "Wings Of Desire" (1987). 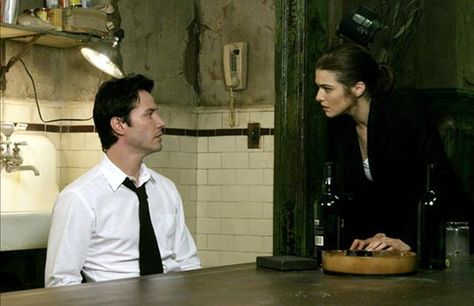 As a follow-up to the "Matrix" trilogy, that further branded Keanu Reeves as a hermetically sealed actor, "Constantine" works successfully in giving the actor a modest realm of allegorical leeway his notoriously wooden talents to flex as not-quite-human attributes. Reeves's chiseled features have aged only slightly since the last "Matrix" film, but enough so that his face helplessly conveys a knowing glint of his character's John Doe-themed persona. Reeves compensates for what he lacks in his ability to emote. He uses his trademark guarded emotional stance to emit a vibrant imagination that seethes away deep in his cerebellum. There's a sense of literate affectation in Keanu Reeves that many audiences respond to.

"Constantine" is an entertaining movie as long as you're willing to sit back and savor the film's purposefully obscure plot while ignoring its fumbling secondary cast performances. The prime conceit of the movie is its gallows humor that seeps out like clotting blood from a decomposing corpse.