FLIGHT OF THE PHOENIX This remake of Robert Aldrich's revered 1965 classic would be 20% better if not for its abysmal use of pop music, and 100% better if Aldrich's son William had never thought to ride on his father's coattails by producing it in the first place. Dennis Quaid does an admirable job in the role that Jimmy Stewart played in the original film as Frank Towns, a cargo plane pilot on a mission to evacuate an oil rig staff in the middle of the Gobi desert. The film's expertly filmed plane crash sequence is an intense episode that sets a high watermark that the movie never again achieves. Director John Moore ("Behind Enemy Lines") falters in all areas of suspense with a dialogue- indigent script by Scott Frank ("Minority Report") and Edward Burns (screenwriter on "She's The One"). Giovanni Ribisi does a lot with a little as Elliott, a nerdy airplane designer who insists that the survivors can construct a new aircraft from their broken airplane to fly out of their desolate sand trap.

Dennis Quaid first attracted critical attention in 1979 with a smallish film called "Breaking Away" that became a box office success due to its charming story about a rivalry between small town locals and encroaching college students in Bloomington, Indiana. Quaid's earthy performance as a faded star quarterback resounded with a depth of emotion that granted him entrée into a stream of standard Hollywood fare that included a few valuable surprises along the way (see "The Big Easy" or "Wyatt Earp"). 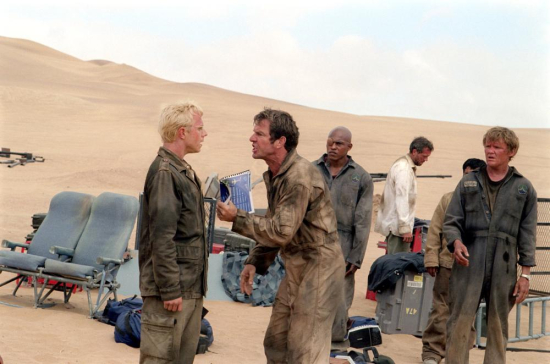 Todd Haynes's poignant "Far From Heaven" (2002) once again displayed Dennis Quaid's impressive range. The film put the actor's name on critics' lips as a star to be reckoned with. Inclined audiences currently have a rare opportunity to compare Quaid in two very contrasting performances between "Flight Of The Phoenix" and "In Good Company," in which Quaid plays a demoted magazine ad man. Comparing Quaid's divergent work to that of an overexposed actor like Jude Law reveals the difference between a pure technician (Jude Law), and an elemental actor who is frequently more interesting that the role he fulfills.

There is a significant power struggle in "Flight of the Phoenix" when Giovanni Ribisi's repressed character Elliott demands that every survivor politely ask his permission to rebuild their wrecked airplane. Frank (Quaid) comes to the group meeting late, but adjusts his manner to bequeath Elliott his somewhat shameful wish. His face his so strong that you start to imagine his possible words long before he speaks. There's body language at play too that utters an ever-thickening suggestion beneath Frank's admission that Elliott is indeed the "boss of everybody." The scene stands out because of the way Quaid quietly commands the screen.

The film starts to crumble whenever it delves into montage sequences meant to speed along action. The thrill of all escape movies (see "The Great Escape" or "A Man Escaped") lies in observing the minute details of the daily struggles that lead up to the hoped-for moment of freedom. But the screenwriters here are more interested in glossing over the nitty gritty details of the characters' effort to build a plane from scrap. Instead we get an insipid group dance montage to Outkast's interminably annoying "Hey Ya" that comes across as a music video sequence stuck in the middle of what should be a nonstop suspense ride. 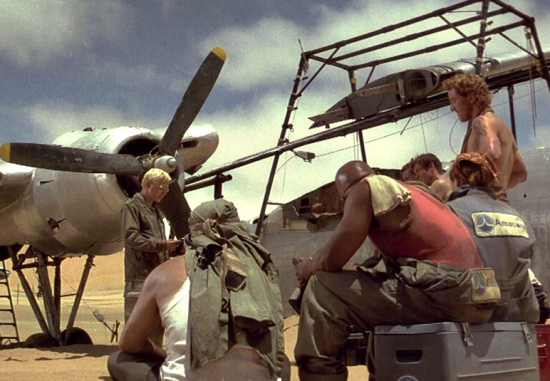 Dennis Quaid's stalwart performance as a natural leader of men doesn't rescue the movie from its lack of convincing dialogue or flaccid plotting, but he does provide a dynamic character hook. The actor makes being stranded in the Gobi desert for two hours entertaining, even if the movie itself isn't.

Posted by Cole Smithey at 04:48:06 PM in Action/Adventure