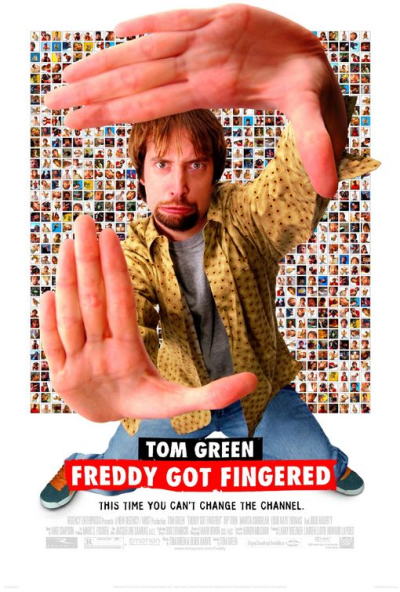 
Class clown extraordinaire Tom Green brings his anti-establishment performance art comedy to a recurring boil with a movie that combines a punk rock esthetic with comedic abandon. Where teen gross-out movies like "Say It Isn’t So" or "Tomcats" sink in their own toilet humor, "Freddy Got Fingered" soars because of Green’s twisted imagination, curiosity, and irony-free execution of comic stunts that frequently involve oral fixation, wordplay, or Green’s bizarre take on large animal’s naughty appendages. 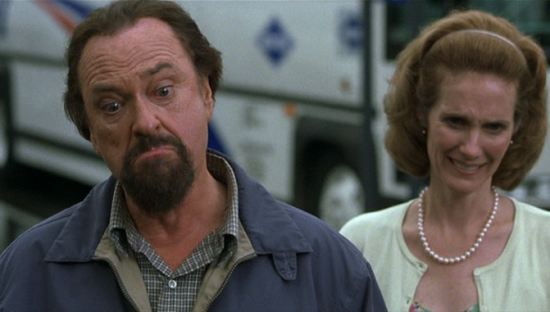 Non sequitur comic gags involving skateboard ramps, salamis, a British Bobby uniform, and a cordless phone play out behind cartoon animator Gord Brody’s (Green) attempts at finding his niche in society. Gord dreams of making his father (Rip Torn) proud. Green masterfully achieves his goal of "confusing audiences" enough to enjoy his signature brand of demented humor. It’s a movie that works perfectly on its own terms, much like a Swiss watch in a dog house overrun by bees and monkeys. You get the picture. 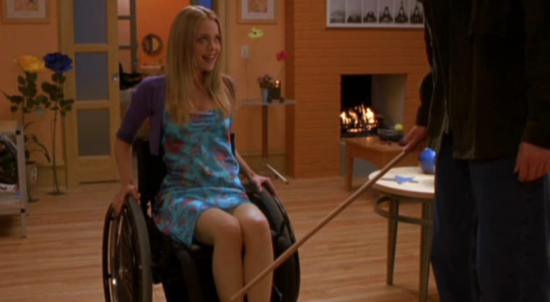 Tom Green is a comic genius. Audiences familiar with his MTV show know the contorted magic that pops out of the lanky prankster with unrelenting regularity. As a director, Green layers songs from punk music standard bearers The New York Dolls and The Sex Pistols to fuel his irreverent vision and underscore on the scene at hand. The Pistol’s song "Problems" becomes an opening power chord statement for the movie as Gord skateboards through a shopping mall while being chased by irate security guards. Gord pulls off a few skating moves to show mocking grace under pressure before catching up with his parents who are waiting to see their boy off to Los Angeles. He's going to L.A. to pitch his cartoon ideas and make something of his life. 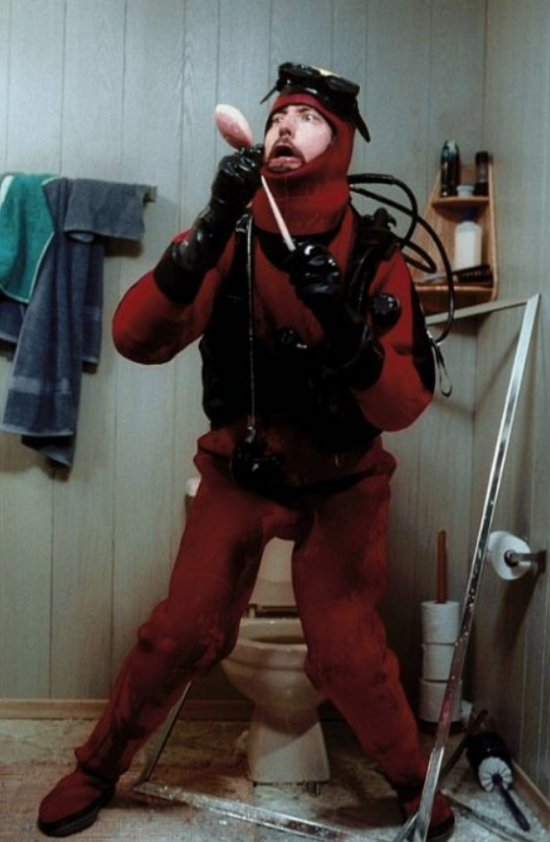 Dad and mom surprise Gord with a blue convertible La Baron that instantly becomes an award of favoritism that 28-year-old Gord flaunts over his 25-year-old brother Freddy. Freddy is as straight-laced and dull as Gord is unpredictable. It’s a classic sibling rivalry that escalates beyond crisis when, after Gord’s dad Jim ruins his skateboard ramp, Gord responds by accusing daddy of "fingering Freddie" to a family counselor. In this way, Gord pits authority against itself and wins a victory over his brown-nosing brother and his overbearing father. Sure it’s a last ditch mean-as-snake-spit thing to do, but Gord seizes the opportunity like the underestimated no holds barred man-boy he is. Gord doesn’t want to be taken seriously, he just wants to be accepted for who he is. 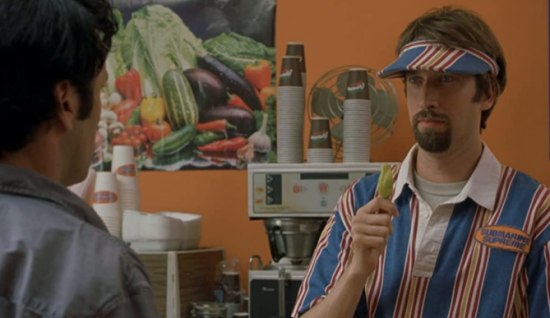 After meeting with failure in L.A. Gord returns home to Portland to further incubate in his parent’s house. On a day that Gord is supposed to be looking for a job, Jim returns home to find his son wearing a business suit backward in front of a full length mirror repeating a ditty to the effect of, "I’m a backward man, I’m a backward man." The scene is loaded with humor as Gord lies about having secured a job with a computer company to his overjoyed father before going back to his self-entertaining mirror act. 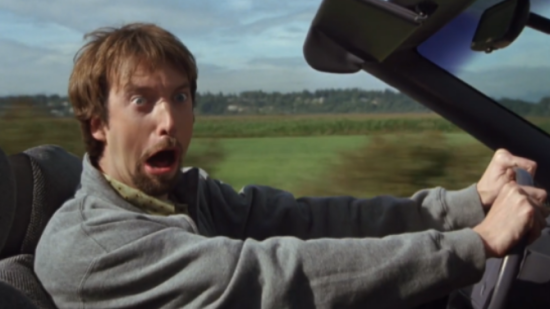 The movie pivots on Gord’s adorable love interest Betty (Marisa Couglan - "Teaching Mrs. Tingle"), a paraplegic nymphomaniac who also indulges in being an amateur rocket scientist. Betty can’t get enough of having Gord cane her lifeless legs or letting her give him oral sex. Through Betty’s bottomless inspiration Gord turns his personality crisis into a successful career as an animator. He still has to reconcile his differences with dad. 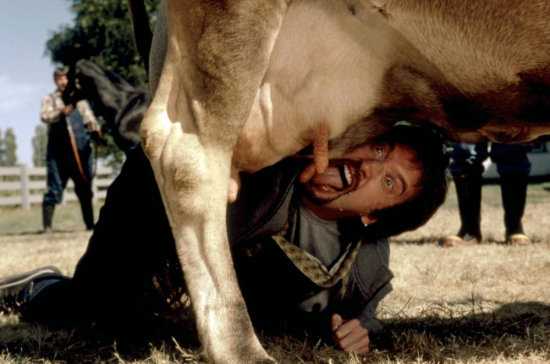 By the end of the movie, Gord has fondled one too many animal penises (once while hilariously repeating "I’m a farmer, I’m a farmer") and spent too long getting intimate with an umbilical cord (by duct-taping a piece of umbilicus to his navel). When Gord tries to impress Betty at a nice restaurant by pretending to be a stock market consultant, he uses an out of date cordless phone with a tape recorder to fill in as a cell phone. The laughs go through-the-floor. 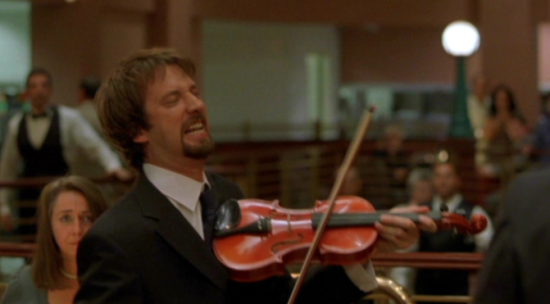 The sheer originality fo comedy on display is mind-boggling. Gord’s haiku rendition of the stock market is in a league of its own. For every person who walks out of "Freddy Got Fingered" in disgust, there will be two-hundred others howling in laughter. "Freddy Got Fingered" may just be the most undeservedly unloved movie of all. And to that end I salute it and Tom Green for bringing it to reality. It is truly a cult masterpiece. 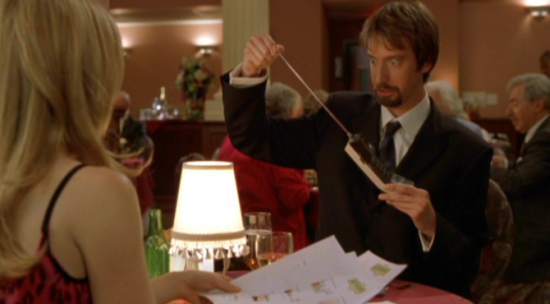