PIRATES OF THE CARIBBEAN: THE CURSE OF THE BLACK PEARL 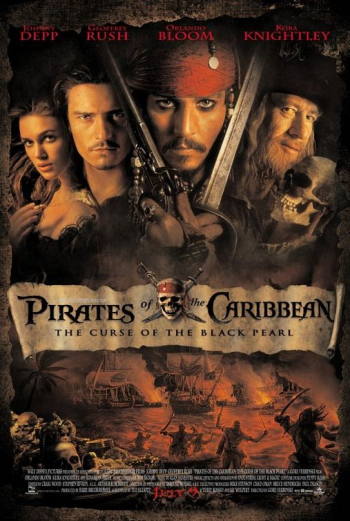 Were it not for Johnny Depp's crassly reassured character creation of scoundrel pirate Captain Jack Sparrow, there would be nothing to relish in this overlong and witless waste of celluloid. The movie is based on a Disneyland ride. Captain Jack hijacks the fastest ship in the British fleet to rescue kidnapped damsel-in-distress Elizabeth Swann (Keira Knightly) from the clutches of Captain Barbossa (Geoffrey Rush). Barbossa has also purloined Sparrow's newly haunted ship The Black Pearl. In addition, Barbossa has stolen a cursed treasure, transforming himself and his crew into a band of pirate zombies who must now attempt to break the hex with the blood of Elizabeth's sappy suitor, a blacksmith named Will Turner (Orlando Bloom). Gore Verbinksi ("The Ring") directs this slapdash pileup of unlikable characters and pointless fencing duels, set against a backdrop of labored horror. 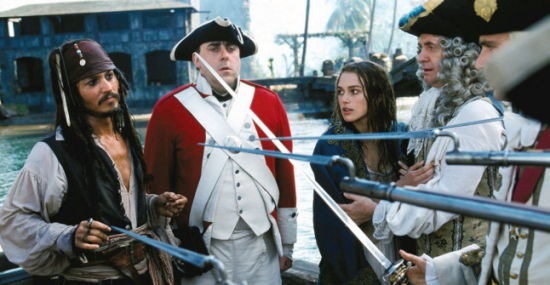 Jerry Bruckheimer is a name that consistently signals big budget, feature length movie trailers. He has become the brand name producer of attention deficit disorder movies. It doesn't matter how many times you get up to go to the bathroom during "The Rock," "Armageddon," or "Black Hawk Down" because you'll never miss anything important in stories that are spread out like spoonfuls of peanut butter over a two-mile stretch of hot asphalt. The fact that the producer of grand scale fiascoes like "Pearl Harbor" and "Kangaroo Jack" is stuck at the hip to Disney studios is apropos for a brand of cheesy entertainment that would be better served if it donated the money it wastes making movies to the American educational system.

"Pirates of the Caribbean: The Curse of the Black Pearl" is a conundrum of impotent cinematic entertainment elements crushed together into a vat of barren atmosphere. On one hand, it's a children's pirate movie that savors spoken references to "scalawags" and "Davey Jones' Locker" beneath interminable sword fights. On the other hand, it's a violent and lackluster pastiche of silly visual mumbo jumbo that comes off as a bad joke carried too far. Either way, "Pirates of the Caribbean" is too extreme for very young audiences, yet not developed enough for adults to enjoy. 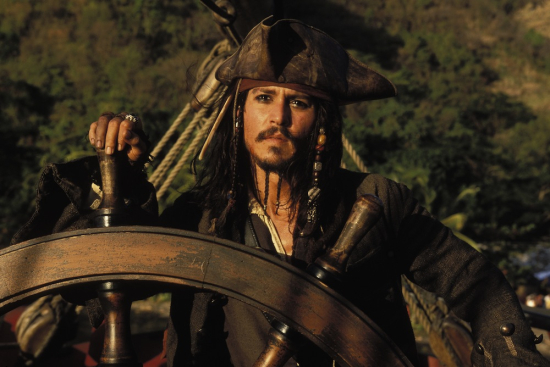 Unsurprisingly, it's Johnny Depp who does his best to single-handedly unify the film's narrative quagmire by pulling focus and tweaking his relationship to the forth wall. Depp is never less than tongue-in-cheek in his slippery relationship to other characters or to the camera-as-audience. He ever so slightly mocks each line of dialogue and action set piece equally from behind a dubious choice of heavy eyeliner make-up that seems self-rendered. For the role of Sparrow, Depp adopts a perpetually drunken demeanor that gives his scenes an array of comedy lacking from the movie's severely disjointed  tone. The film feels like it was directed by committee, with Johnny Depp left alone to lend whatever character cohesion there is.

Johnny Depp has long been at liberty to do as he pleases regarding the development of his characters. It's a rank that allows for solid work when a director like Polanski ("The Ninth Gate") challenges him, but leads to lazy efforts when he's coupled with lesser talents like Rand Ravich ("The Astronaut's Wife") or the vastly overrated Lasse Hallstrom ("Chocolat"). Johnny Depp is currently straddling a thin line between persona acting (witness the demise of Nicolas Cage to this trap) and holding on to the character work that he built his career on. "The Pirates of the Caribbean" is a "Johnny Depp" picture by default, but it's not a movie that drives his career forward in the least. 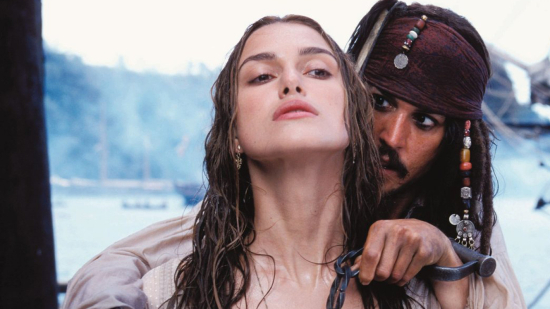 In many ways, Depp has become the Jack Nicholson of his generation. His wild swings between intelligent art house pearls like "Night Falls" or "Fear and Loathing In Las Vegas," and meaty mainstream dramas such as "Donnie Brasco" or "Blow" have cut a swath of artistic intention that demands a steady stream of risk taking.

Working with the same producer who offered the pernicious apple to Nicolas Cage with "Con Air" may be Depp's way of dancing close to a flame he can douse at any time. If that's the case, it's time for the 40-year-old actor to pull a Jack Nicholson, and live up to his potential.

Posted by Cole Smithey at 07:02:00 PM in Action/Adventure, Fantasy