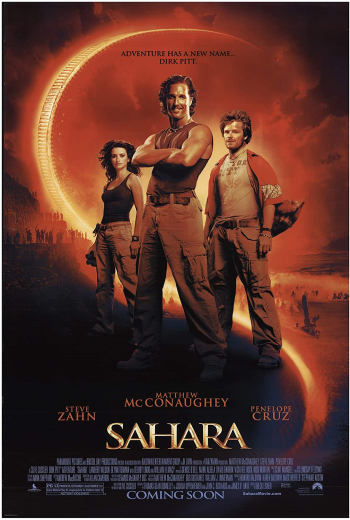 "There’s no there there" is an apt way to describe the average Hollywood movie that occupies thousands of cinema screens across the country in a monopolized system that perpetually blocks out hundreds of foreign and independent movies. The latest adventure comedy from Paramount falls into that chasm as a shoddy derivative of "Indiana Jones"- styled films. Matthew McConaughey plays generic sun-kissed treasure-finder Dirk Pitt. He searches for an iron clad Civil War ship in the middle of the Sahara desert with his quirky sidekick and longtime best friend Al Giordino (Steve Zahn). Penelope Cruz adds female distraction for the explorers as Eva Rojas, a doctor working for the World Health Organization. Eva is there to remedy a plague sweeping across Africa from an epicenter in Mali. The movie is based on the popular novel by Clive Cussler ("Raise The Titanic").

"Sahara" hits a false start with a Civil War battle sequence that probably cost half of the film’s overall budget. In it, cannonballs from an off shore iron clad gunboat rip through trees and buildings on dry land while rebuffing a fierce attack. The explosive-heavy scene is wasted on the audience because, instead of lending context to a story that transpires 135-years later, it merely tips us off to the lack of storyline that follows.

As opening credits roll we get an intimate 360-degree view of the inside of Dirk Pitt’s uninhabited scientific lab. It’s lined with photos of him and his buddy Al tacked on the walls. From the unattended, ever-lit Bunsen burner we know that this is a set designer’s handiwork rather than a place where any serious scientific study ever takes place. Nonetheless, it's the most evocative scene in the movie. In a way the filmmakers are being honest by letting the audience know up front that this will be a hollow adventure movie. But it’s even worse than that. 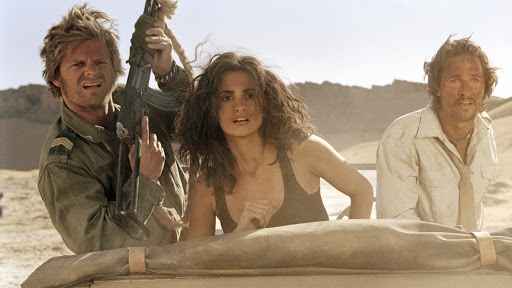 Matthew McConaughey does his best Charles Atlas impression while he and Al borrow a high tech speedboat from their wealthy employer Admiral Sandecker (William H. Macy) in order to search around the waters of West Africa for the Civil War boat that locals call the "Ship of Death." From a civil war era gold coin found in a West African river, Dirk believes that the ship of his obsessions may be buried in the sands of the Sahara that were supposedly covered in water 135-years ago. No cogent explanation is given regarding the fuzzy math Dirk used to make his calculations, but it doesn’t matter much since the search quickly becomes hijacked by a subplot about a corporate scumbag named Massarde (Lambert Wilson) who’s busy tainting Africa’s drinking water with nuclear waste disposal. If Massarde isn’t stopped, the constant surge of toxic water will infect the oceans and bring ruination on the planet.

So before Dirk can find his treasure trove desert-boat, he must shut down Massarde’s gigantic power plant with the help of Eva and Al. For an adventure movie based on chase scenes in exotic locations "Sahara" never takes hold because director Breck Eisner and his team of screenwriters can’t agree on what the story’s about or what tone to take. Matthew McConaughey executive produced "Sahara." He presents himself as a pin-up rendition of Indiana Jones. Hollywood, like Wile E. Coyote, keeps going back to the drawing board to come up with yet another variation on a defective formula. It's a sign of insanity to repeat the same action while expecting a different result.

Posted by Cole Smithey at 05:46:40 PM in Action/Adventure