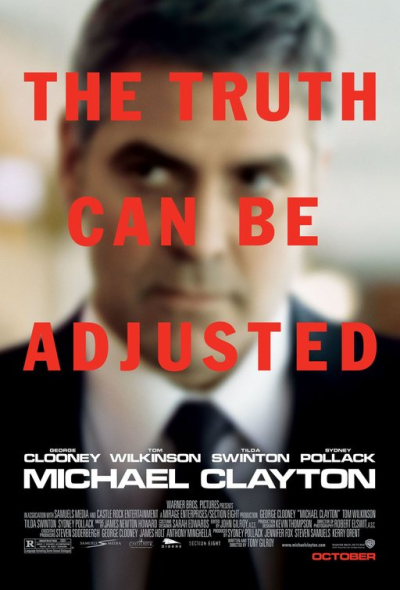 Michael Clayton (George Clooney) is a contracted back-of-the-house "fixer" at Kenner, Bach & Ledeen, one of Manhattan’s largest corporate law firms. He’s the guy sent out at midnight to the Westchester mansion of some rich bastard desperately looking for a way out of a hit-and-run car accident that left a pedestrian in an unknown state of physical harm. A recent divorce and a huge debt from a personal investment deal gone awry has left Michael consumed with repairing his own unraveled life. But this ethically equivocal character is cut from hickory, not pine. Michael is a doer, not a worrier. 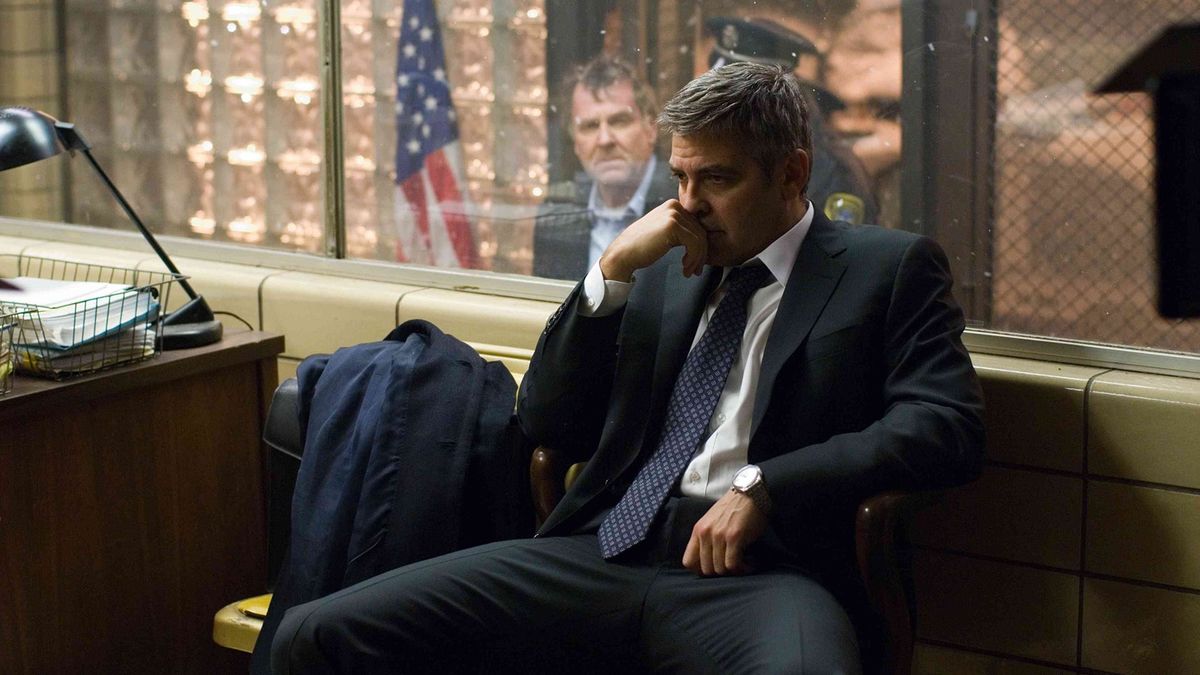 "I’m not a miracle worker, I’m a janitor" is the line he uses to keep his self image in check. But there’s also a bit of the dreamer in Michael Clayton, and it’s a characteristic that saves his life during a harrowing scene that acts as a reference point for the story.

Screenwriter Tony Gilroy ("The Devil’s Advocate" and "The Bourne Supremacy") makes his directorial debut with the assistance of pedigreed producers and executive producers that include Sydney Pollack, George Clooney, Steven Soderbergh and Anthony Minghella. The list of Academy Award-nominated names set a cultivated tone for a scathing corporate thriller that emanates from the same narrative petri dish that spawned films like "The Parallax View" and "The China Syndrome." The point of view in "Michael Clayton" is appropriately more alienated than that of those dated films, but is nonetheless rooted in the reality of a corporation’s tendency to chew up and spit out humanity in the name of quarterly profit gains. 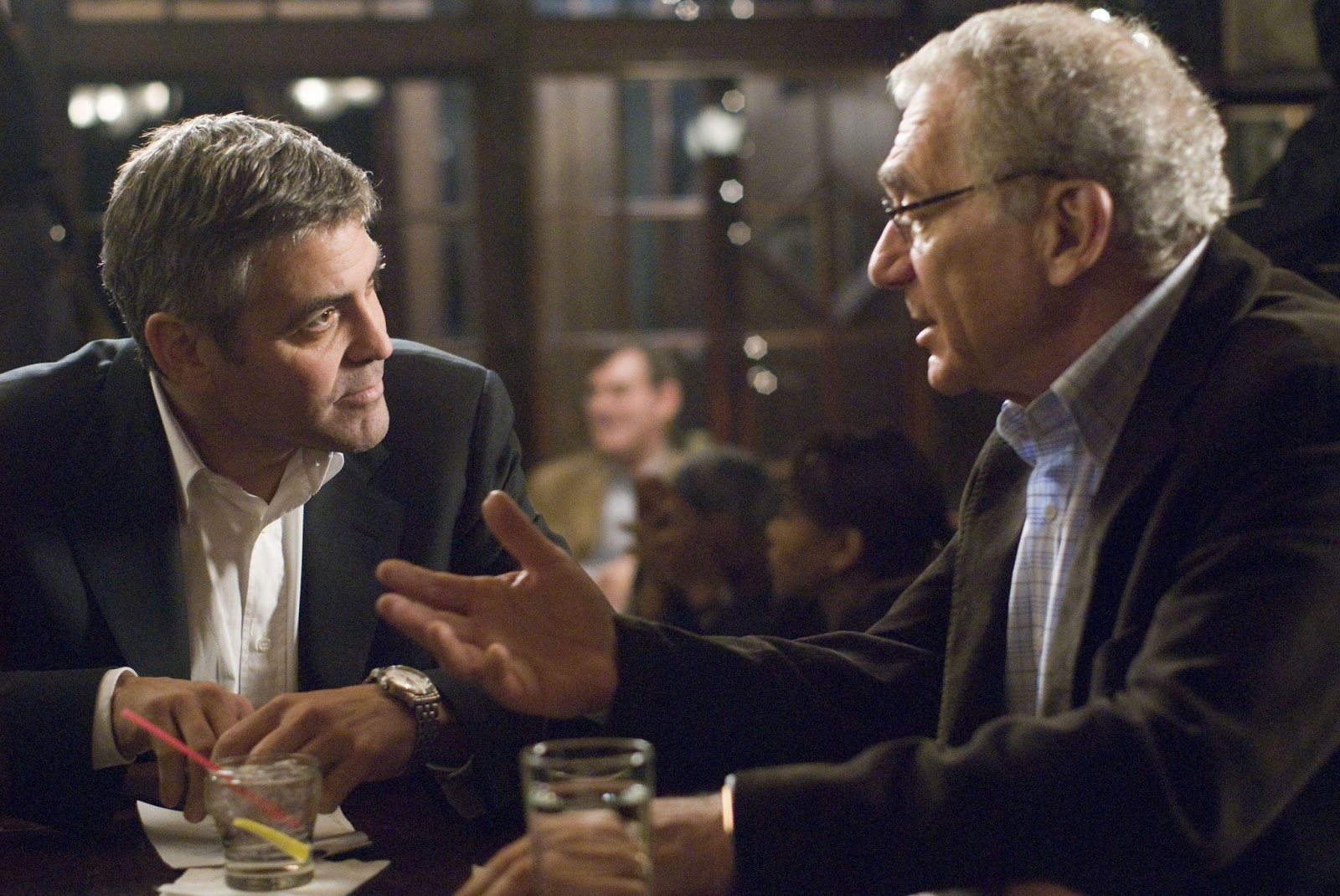 Michael’s boss Marty Bach (Sydney Pollack) is on the brink of inking an out-of-court settlement with plaintiffs poisoned by a weed-killing product made by U/North, an agrichemical company that Bach’s firm represents. After six years of working around the clock to protect U/North, Kenner, Bach & Ledeen’s best litigator Arthur Edens (Tom Wilkinson) suffers a nervous breakdown during a deposition. His freak out is the stuff of legend. Recorded for posterity on videotape, Arthur inexplicably disrobes in the conference room before running naked into the parking lot. It’s an act of self-sabotage that has U/North’s Machiavellian in-house counsel chief Karen Crowder (Tilda Swinton) looking at Michael to repair in the quickest way possible.

What Karen doesn’t yet fully comprehend is the extent of Michael’s friendship with Arthur, or Arthur’s recent discovery of a smoking gun memo from U/North exposing the corporation’s moral turpitude. Arthur’s ensuing epiphany and attempt to sabotage the U/North lawsuit he has worked so hard to build hits at a depth of self-realization rarely alluded to on screen, and Tom Wilkinson’s performance is nothing short of astounding. The British actor of such films as "In the Bedroom" and "The Girl with the Pearl Earring" was cast for his innate ability to balance pessimism and optimism through a prism of teetering sanity. It’s not a far stretch to suppose that Oscar season might include Wilkinson’s name in its list of nominees.

The high stakes of corporate warfare dictate that Karen orders full surveillance of Arthur’s phone, apartment and whereabouts. She doesn’t stop there. Tilda Swinton’s character represents a sexless ambitious female swimming in the shark-infested waters of the male-dominated corporate domain. We watch her prepare for a speech in her hotel bathroom mirror while putting on make-up. The translucently layered scene captures Swinton, the actor, plotting her delivery and Karen, practicing the subtlety of every word she will speak. In the next second we see Karen paraphrasing the rehearsed lines in a boardroom she commands with every syllable. It is the clarion voice of a gangster.

Tony Gilroy exhibits utter confidence in methodically laying out his characters’ motivations during the deceptively sedate first act. Seemingly open-ended narrative threads gradually come together in rubato time. Nothing is rushed. The narrative style breathes with a realism that can be misconstrued as overly complex, and yet there is nothing excessively elaborate. The filmmaker understands the droning tempo of careers spent in corporate law offices and the alternating speed with which do-or-die tasks can be dispatched. The authenticity he achieves points to experience he’s gained since finding the original inspiration for the film while doing research for writing "The Devil’s Advocate." 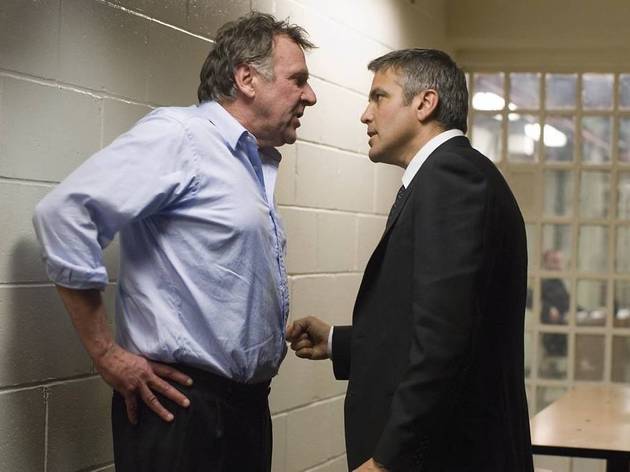 "Michael Clayton" is an up-to-the-minute allegory about the devastating power and malicious intent of a corporation that conceals its unethical actions with television commercials featuring close-ups of verdant nature. The film is also a George Clooney vehicle in the vein of "Good Night, and Good Luck" and "Syriana." Clooney’s commitment to creating a cinema of social responsibility carries with it an infectious passion and integrity. He has assembled an easily identifiable brand that hits a consistent watermark of reliable quality. George Clooney helps finance his vision with money from lowest common denominator movies like the "Oceans" franchise. It seems an ethical price to pay for films like "Michael Clayton" to be made.