Hollywood Scratches in the Dirt of the Marital Myth 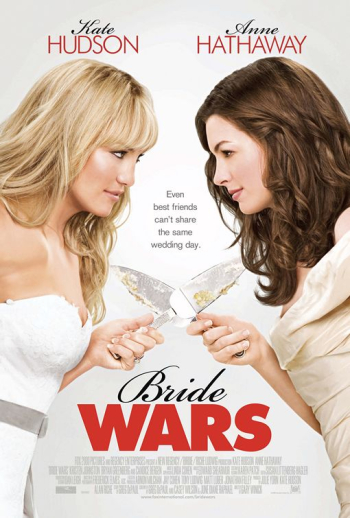 With a title like "Bride Wars" you'd expect some explosive comic moments of wedding sabotage and subterfuge, but instead you get a clunky formulaic romantic comedy, even by Hollywood standards. Had Liv (Kate Hudson) married her best friend and rival Emma (Anne Hathaway) it would have at least followed in the manner of the pair's giddy lovefest relationship that suffers a relatively brief catfight. 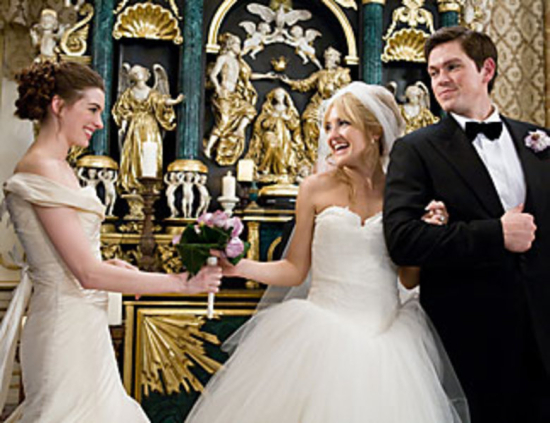 Best friends since childhood, Liv and Emma have long shared a dream of holding their wedding day at Manhattan's glamorous Plaza Hotel. Crisis comes via wedding planner extraordinaire Marion St. Claire (regally played by Candice Bergen), whose voice-over narration provides unnecessary exposition. Marion's facade of nuptial planning perfection collapses when she mixes the dates of Liv's and Emma's June weddings to coincide on the same day. Obligatory shopping, arguing, and dance sequences lead to a feeble climax. For their part, Hudson and Hathaway share little chemistry together in spite of their polished individual comic abilities. The worst thing about "Bride Wars" is that it's a boring movie. 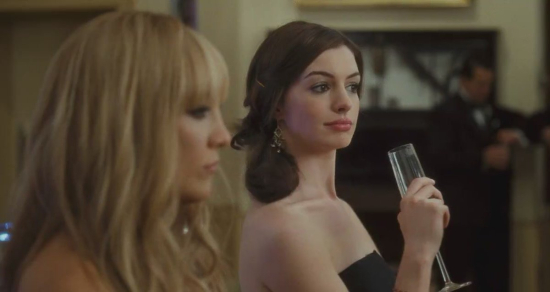 Every year Hollywood spits out a quota of romantic comedies not fit even for airline viewing. As years pass, the standby of rom-coms centered around weddings have started to resemble museum artifacts associated with a tradition of marriage that more and more people look at as obsolete. From its opening childhood flashback sequence of young Liv and little Emma gazing longingly at the bride in a wedding ceremony, "Bride Wars" adopts a condescending tone of commercial satisfaction that Kate and Liv have bought into hook, line, and sinker. The film's would-be target audience of 10 to 16-year-old girls will want to go home and prissy themselves up dreaming of a day that, as statistics show, may not come. That's not to say that this audience is missing the retail message about buying clothes, jewelry, make-up, and all-things "dreamy." 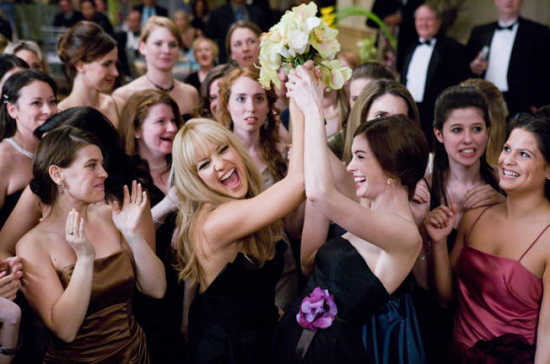 Emma's low income as a school teacher matters not compared with Liv's fat bank account from working as a hotshot corporate attorney. The income discrepancy is just one of many ripe opportunities for satire that the screenwriting committee of Greg DePaul ("Saving Silverman"), Casey Wilson, and June Diane Raphael skip over in favor of stumbling through two acts of "OMG" shopping kissyface. The about-to-be-husbands are as bland as toast, and it's in this particular area of masculine representation that the writers hit a stream of false notes. Without interesting secondary characters, the film has nowhere to go when the camera isn't on Hudson or Hathaway. 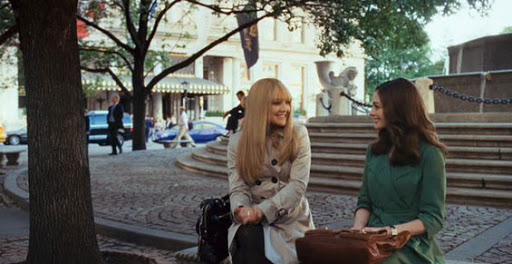 Kate Hudson is listed as one of the film's three producers and at this point in her active-but-second-rate career, she seems to believe doing a fluff movie opposite rising star Anne Hathaway will lend some momentum in spite of the source material's less than banal substance. It's been a long time since Hudson's terrific performance in "Almost Famous" made her famous, and the young actress is clearly capable of much better work. Sometimes you just need better script readers.