Spielberg Loses Head - Saves Ryan
Where’s an "NC17" rating when you need one?
By Cole Smithey 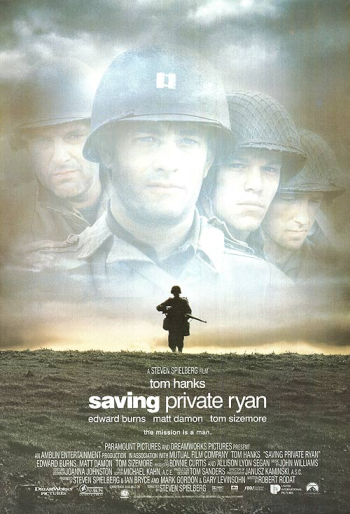 We all know that Steven Spielberg is the real "King of the World," Tom Hanks is the Pope and Matt Damon is the prince--except not really. Together they form Spielberg’s latest formula for profit after rallying Jewish audiences for "Schindler’s List." Now it’s time to hit up the white Catholics and Protestants, so you know it has got to be BLOODY.

"Saving Private Ryan" is way beyond revisionist history; it’s absolutely implausible. No group of soldiers were ever sent to search after one guy because his brothers were killed and some Sergeant wanted to assuage the mom back home. But issues like plausibility, the trauma of war, or believable characters aren’t the point anyway. It’s only about how realistic and cool Spielberg can show guys getting limbs blown off, heads blown off, guts hanging out, and thousands of bullets going ping, whistle, and zip into human flesh. 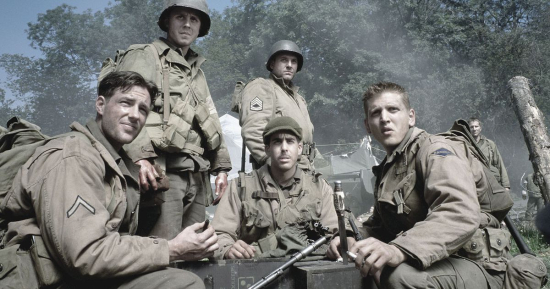 There’s a great shot of a soldier picking up his own arm to take with him, there’s Captain Miller (Hanks) dragging a wounded soldier while the poor fellow gets his lower half blown off, and there’s the blood-red tide beating up on the French shoreline. Violent, harrowing, and horrific; you bet. This is not a movie to take your children to see, or even a date. And it’s definitely not worth seeing alone. How the ratings board gave this movie an "R" rating is a mystery. Well, maybe not. 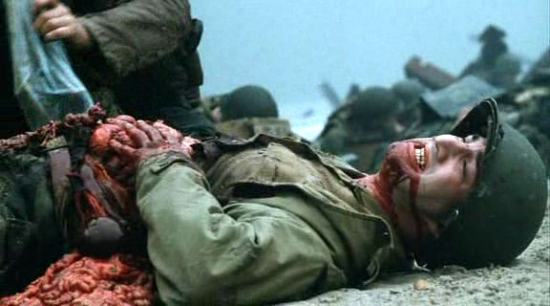 The wickedness in "Saving Private Ryan's" publicity campaign has become the stuff of legend in the past week, from Spielberg’s personal manner of "warning" parents, teachers, and kids that anyone under 15 should not see this movie. It is a transparent approach to gain audience members through reverse psychology. If I tell you not to do something, I know you’ll want to go out and do it.

Months after the oblique trailer for the film started running- where no indication of the film's extremely graphic violence is hinted at - Spielberg is suddenly alerting the world to what a carnage fest his movie is. If he had really been interested in this issue, he would have requested an NC-17 rating from the start and approved a more telling trailer to promote the movie. Me thinks he doth protest too much. 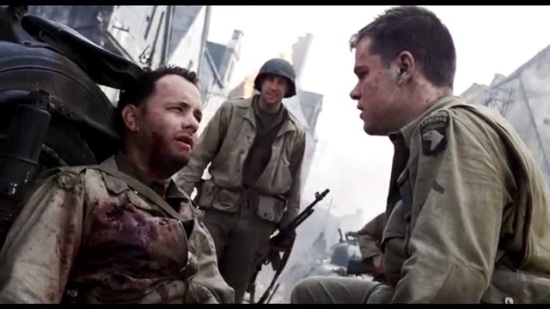 The problem is much more insidious though. There will be plenty of people (who haven’t seen Bertolucci’s "1900" or never heard of Elem Klimov’s "Come and See," or Visconti’s "The Damned," or have forgotten Kubrick’s "Full Metal Jacket") raving about this being the greatest war movie ever made. Well it’s not. It doesn’t even rate. Any director with Spielberg’s money and clout can hire the bloody look and feel of real battle. Yes, the actors are good. Save for Hanks (Whoopi Goldberg’s evil twin); so humane, so Hanks, so what. Matt Damon (as private Ryan) breezes through his oh-so-perfect monologue about the last night he spent with his now deceased brothers. 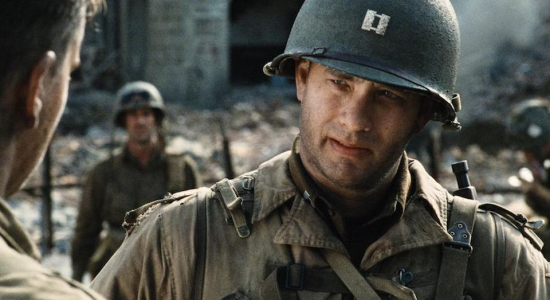 The effects and make-up are terrific. There’s even the signature Spielberg graveside scene with all the tombstones commanding respect (like "Schindler’s List). But when you look deeper at the opening and closing scenes, and notice that there are no tears on the grandfather’s face, or that his busty grand-daughters are scene-stealing in the background, you realize that something is rotten in Denmark. And that’s the guile of a pompous, self-congratulatory filmmaker who has bankrupted his soul in the name of profit and ego. 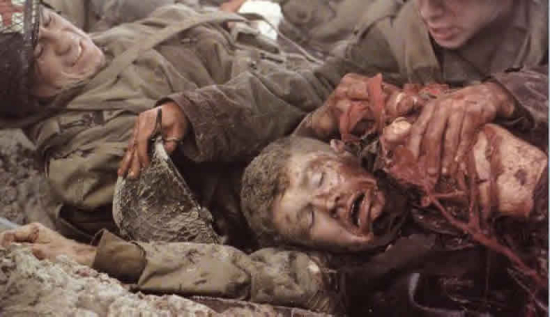 There’s a very unnerving scene in which a German soldier slowly drives his knife into an American’s heart while almost kissing him. It’s the exact kind of sadistic pleasure that we imagine a Nazi taking in an act of murder. The problem is that Spielberg gives no context for the venomous behavior. When Donald Sutherland, as an Italian fascist in "1900," murders a young boy during a sex act, it’s all the more horrific because you know exactly where his evil comes from and how deep it runs. In "Saving Private Ryan" Spielberg merely takes pornographic glee in hand-held cameras running amok, neck deep in gore, with a cast of worthy actors surrounded by great technicians. 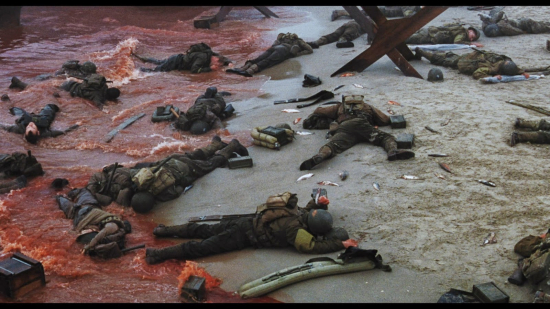 Military strategists agree that the two day battle called "D-Day" was a huge mistake. The military sent out a lot of U.S. soldiers to absorb German ammunition resulting in the highest number of causalities for any battle in history. The U.S. could have made an evasive thrust by sending soldiers directly to Berlin. And without all that hot, wet, spewing blood Spielberg would have no movie. Damn it all to hell. 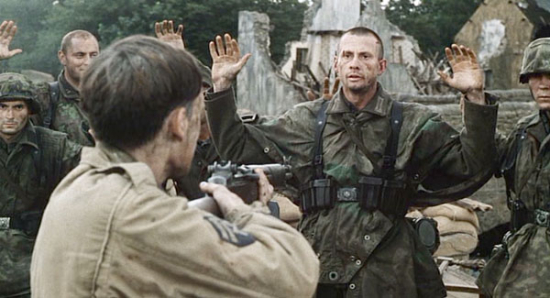