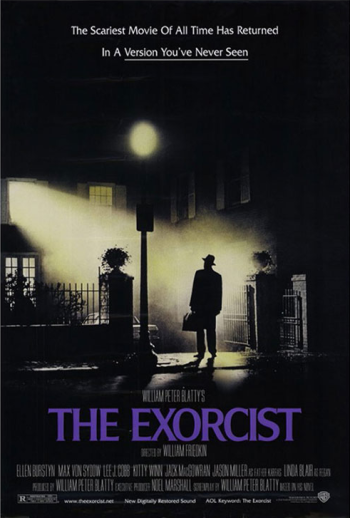 On the day after Christmas in 1973, Oscar-winning director William Friedkin followed up the tremendous success he enjoyed with "The French Connection" (1971), with the most daring horror film ever made; an adaptation of William Peter Blatty’s novel "The Exorcist." Blatty, a devout Catholic, had been inspired by a 1949 Washington Post article entitled "Priest Frees Mt. Rainier Boy Reported Held In Devil’s Grip," and carefully crafted his novel around the area in Georgetown where he attended Jesuitical Georgetown University.

Although the movie barely escaped an "X" rating by the MPAA ratings board, it was treated as an "X" movie in cities like Boston and Washington D.C. where children under 17 were not admitted into theaters showing the film. 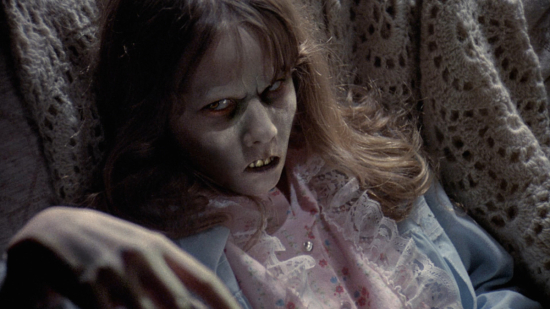 Immediately after the movie was released, stories spread around the country about audience members walking out, vomiting, fainting, or suffering heart attacks. The Toronto Medical Post released an article about four women so traumatized by viewing it that they were confined to psychiatric care. 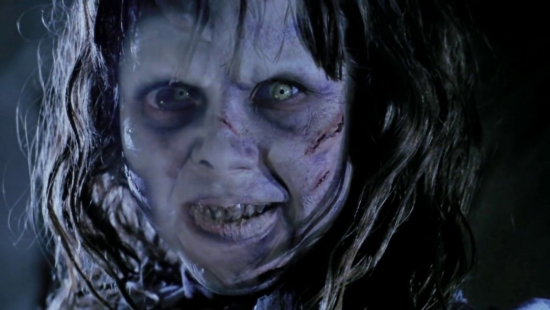 There was a rumor that two nuns in D.C. committed suicide because they felt ‘evil’ had entered their bodies when they watched the movie. In the U.K., leaflets were passed out in front of cinemas asserting, "We cannot stop you from seeing this film, but you should know that it bears the power of evil!" Even now, the movie is banned from being released on video in the U.K. because: "Showings of this film have resulted in severe emotional problems for a small but worrying number of adults." 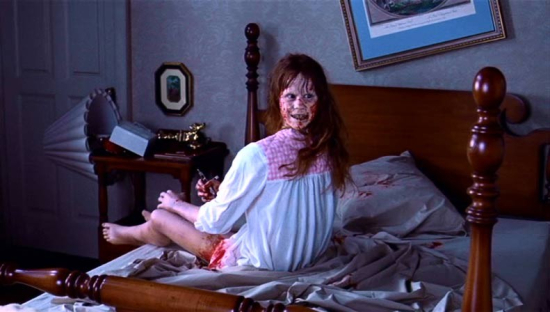 By 1974, Blatty’s novel was on every bestseller list, and the movie was a blockbuster before the idea of "blockbusters" ever existed. It was a classically compelling American Gothic legend that set up an earth-shattering physical and religious battle between good and evil over the possessed body of a young girl named Regan MacNeil (unforgettably played by Linda Blair). Regan’s possessed entity was, and is, the closest vision of sheer evil to ever appear in fictive film. It was only fitting that the two exorcists attempting to save Regan’s life, by expelling the demon within her, offered up and ultimately sacrificed their lives. That the priests themselves were the real target of the demon’s malevolence, is the element most underscored by the newly restored version of "The Exorcist." 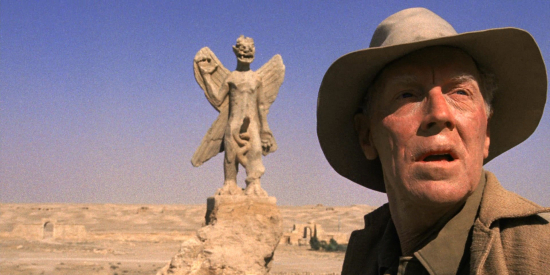 Many people were outraged that 12-year-old actress Linda Blair was allowed to make a film in which she spewed obscenities like a satanic sailor, and abused her genitalia with a crucifix before shoving her mother’s face into her blood-soaked crotch. But that was just the beginning of numerous terrible episodes of head-twisting, levitating, and bile-vomiting that attracted spectators in droves. Little did audiences realize that Friedkin had already severely pulled the reigns on the terrifying effects of the film by cutting out 11 minutes of [what he considered] "excess footage" to bring the film in just under two hours. William Blatty was furious over the cuts, believing that the movie had lost its moral center, and was upset that audiences might think that the demon had won in the end. 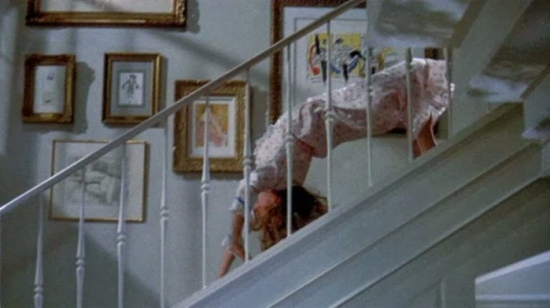 Judging from the hugely negative impact that Friedkin’s restrained version had during its initial release, the hot-shot director did himself, and society, a favor by taking out most of the newly restored footage. Finally, after 25-years of constant cajoling to replace the lost footage, Blatty’s appeal was answered when Friedkin agreed to re-examine the missing scenes and became inspired to rework much of the material back into the film. The most obvious addition is the inclusion of the much-discussed "spider-walk" scene, in which stunt woman Linda Hager descends the MacNeil stairway as the possessed Regan. She scurries upside down and backwards on all fours down the staircase in her nightgown. Between the modified sound effects of her hands and feet hitting the floor, and the tag shot that ends the sequence, the vision instills pure terror.

Aside from a newly enhanced soundtrack, near subliminal images of the demon’s altered face appear along with quick-cut hallucinations. While the device may seem heavy-handed to some audiences, the images expand the haunting aftereffects of the movie. It’s these half-seen images that recur in the viewer’s mind days later. 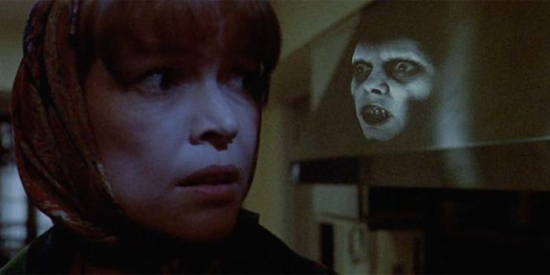 Friedkin’s signature gritty documentary quality is retained in all of its stark, natural beauty. The contrast of scenes shot in low light and overcast skies pitted against special effects lovingly nurtured by Marcel Vercoutere and make-up wizard Dick Smith, retain their burly qualities. Ever surprising too are the pitch-perfect performances of every actor in the movie. Ellen Burstyn gets more screen time as Regan’s atheist mother Chris, and her tough yet sympathetic character carries a well of emotional weight that anchors the story. 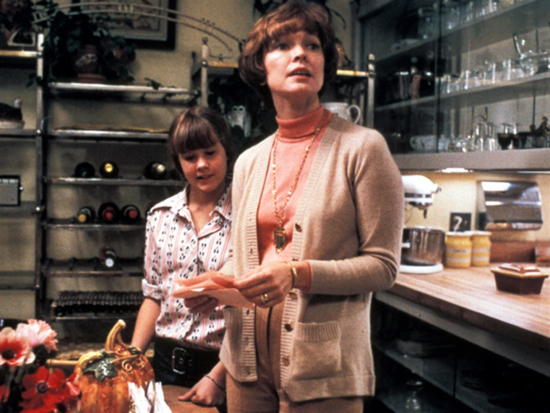 Significant is an added conversation between the two exorcists in which Father Merrin (Max von Sydow) explains to Father Karras (Jason Miller) that the reason this demon has chosen to consume the young girl is to rattle the faith of those around her. Regan is not the target of the evil, but merely the most effective device the demon can use to achieve its goal. The demon might not win by the terms that Father Merrin explains to Father Karras, but in the end there is no evidence that the evil that tortured Regan and those around her has been annihilated. 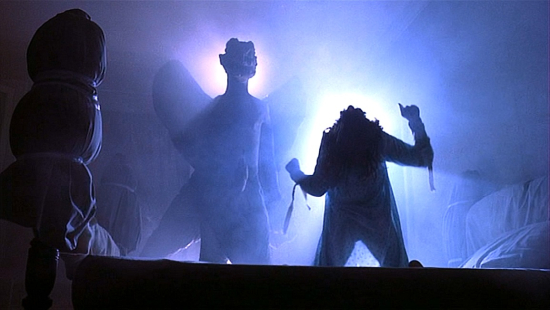 Overall, the newly restored scenes give the audience a much clearer understanding of Regan’s possession, and assign a stronger empathy to Father Karras as the film’s protagonist. As William Friedkin told Fangoria magazine, "the whole progression of the movie is a series of increasingly bizarre, cataclysmic incidents that become more and more outrageous and disturbing, but which remain unresolved until the final exorcism." 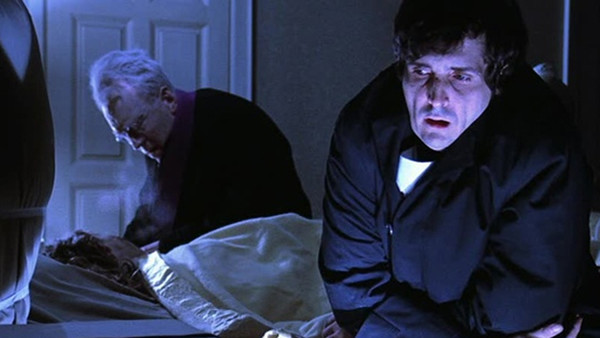 Indeed the supernatural incidents are resolved in the closing scenes of the movie, but the potential for evil to grip mortal humans is a ghost that lurks in the memories of every audience that sees "The Exorcist." Friedkin has also said that "you take away from the movie what you bring with you when you watch it." I went prepared to be scared, and woke up sleep-walking two nights in a row after I saw it. Isn’t that what horror movies are supposed to do? 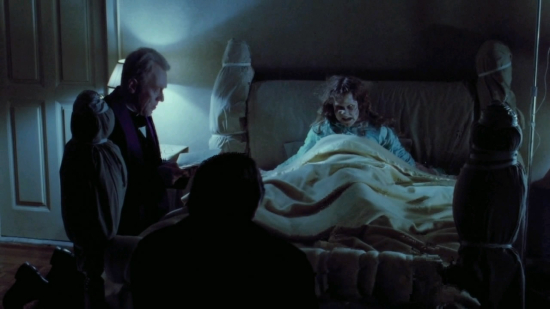