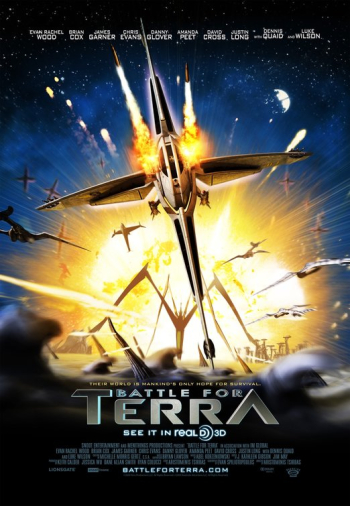 Too thematically dim to hold the interest of adults, and too alienating and violent for young children, "Battle for Terra" is an off-putting animated sci-fi flick for no one. The 3-D planet of Terra is inhabited by a fundamentalist-based utopic society of large-eyed tadpole-like creatures that swim and fly through their planet's atmosphere where everything resembles some form of organic plant life. An invasion force of earthlings are initially viewed as Gods until their mission of genocide becomes clear, and the Terrareans take to the skies with battle planes of their own. 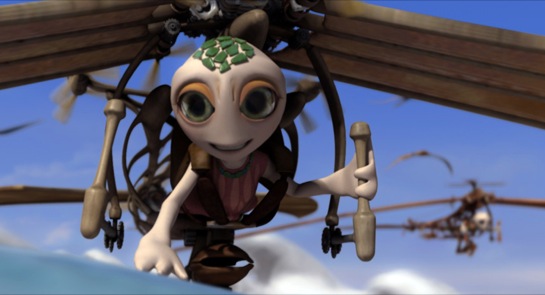 Mala (voiced by Evan Rachel Wood) is a freethinker (read: validated atheist) and plays Juliet to crash-landed Earthling astronaut Jim (Luke Wilson), whose affection for Mala might be the only thing to save her fragile planet from its human would-be occupiers. Impressive computer generated graphics are the only thing to recommend in this thematically tone-deaf sci-fi travesty.

"Battle for Terra" sits under a compressed glaze that renders its fantasy world as an opposite universe to the happier designs of Dr. Seuss' Whoville. Giant whale creatures with origami hindquarters swim through the air where teenaged Mala and her submissive boyfriend Senn (Justin Long) fly their balsa wood-seeming airplanes with the kind of delight that human kids enjoy bicycles. So it is that when human interlopers attack Terra as a last ditch effort to save their species after ruining Earth, Venus, and Mars, Mala becomes a child soldier in the fight against the astral invaders. Screenwriter Evan Spiliotopoulos ("Pooh's Heffalump Movie") based the script on a story by the film's director, Aristomenis Tsirbas, and shows no sense for where the limits of thematic indoctrination should be drawn for a children's film. This project seems more like a child soldier recruitment film than a source of lighthearted entertainment. 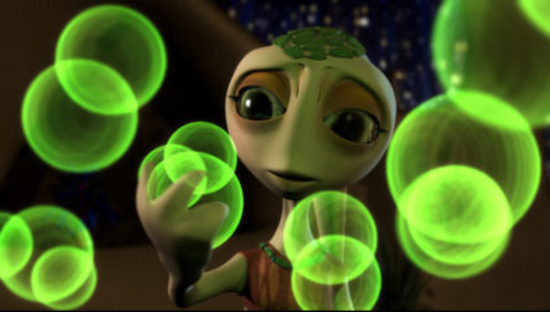 After her religious fanatic father is captured and taken aboard the orbiting human spacecraft, Mala intentionally lets herself be captured so she can attempt to rescue her dad. Things don't go as planned, and Mala is thrown into a torture chamber by the heartless General Hemmer (voiced by Brian Cox) who sets up an imposible choice for the freshly anointed hero soldier Jim Stanton who must choose between his astronaut best friend or Mala. 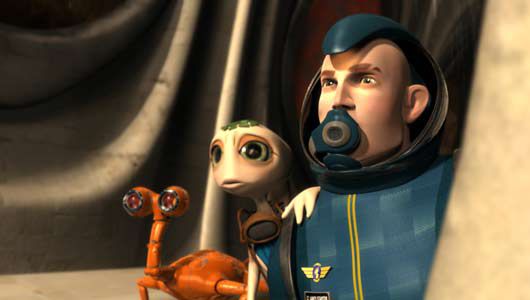 The film's many air battles tacitly conjure up "Star Wars," albeit without its jocular humor and awe-inspiring attractiveness. The inclusion of plot-crucial Kamikaze attacks skew toward a thematic defense of suicide bombers that is at best a little disturbing. However much the animators enjoy flashy 3-D spectacle, the movie raises far too many red flags about the intention of its writers to smuggle in dubious political ideologies. From the gooey-eyed tadpole creatures that fight to the death to its smug ending, there is something very fishy about the "Battle for Terra."