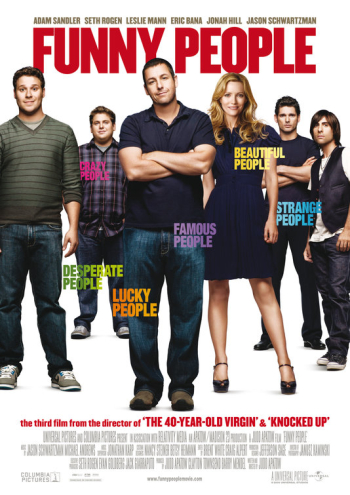 Writer/director Judd Apatow raises the stakes on his already stellar formula for generating laughs with a comedy that is equal parts sincerity and wit. Set in a real-life world of Los Angeles stand-up comics, the story revolves around Adam Sandler, very much playing himself as George Simmons, a hugely successful comedian living it up in his coastline mansion. News that he's dying of leukemia inspires George to hire local newbie stand-up comic Ira Wright (perfectly played by Seth Rogen) to write jokes and work as a personal assistant who will guard George's medical secret from the press. An awkward friendship develops between George and Ira as George tries to set the record straight with family members, old friends, and with his former fiancée Laura (played by Leslie Mann).

Seth Rogen is an ideal comic foil for Sandler's character, and the film provides a great format for each to express a range of comic levels. "Funny People" is by far Adam Sandler's best movie because Apatow writes comic set-pieces that allow germs of humor to expand between the more obvious laughs that Sandler hits with sharp-shooter accuracy. At two-hours, twenty minutes, "Funny People" runs about fifteen minutes longer than it should. But this is still the funniest movie of the year. 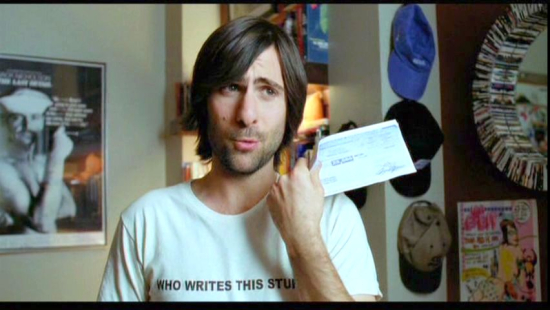 At home, Ira sleeps on the couch of his comic friend Mark's (Jason Schwartzman) apartment. Mark lords the newfound success he enjoys playing a role on a crumby TV sitcom by "accidentally" leaving his weekly paychecks laying around in obvious places, like on Ira's pillow. Fellow stand-up comic Leo (Jonah Hill) also shares the apartment and leverages his own brand of oneupsmanship over Ira, who's comic delivery is not as polished as Leo's. The boys' club atmosphere--part support group and part surrogate family — goes a long way to providing Rogen's character with a tangible sense of youthful ambition trying to claw its way past his more successful peers. When Ira answers George Simmons' call, requesting writing assistance from he and Leo, Ira cunningly keeps Leo out of the conversation so that he can gain some ground on his condescending roommates. Ira is not above entering into competition with his peers, but he's more passive aggressive in his approach — to the point of tolerating jabs of degrading abuse that George regularly dishes out once their working relationship begins. 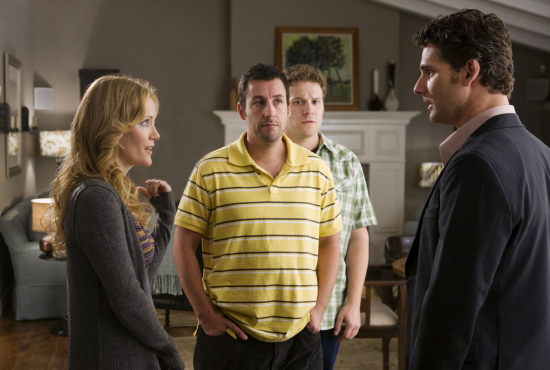 George's terminal prognosis hits him like a ton of bricks that he tries to throw back one by one later that night at a comedy club audience when he shows up for a surprise performance. "You're gonna miss me when I'm gone," and "Who will fill my shoes?" are the questions George runs up the flagpole during his miserable impromptu stage act. If anything, it seems that George's date with death will make him an even more insufferable butthead than he already was before the diagnosis. George's unsatisfying personal life has revolved around a stream of meaningless sexual conquests, and the ability to hang out with a veritable who's-who of comic talent that don't constitute real friends. Apatow's inclusion of cameos from the likes of Andy Dick, Eminem, Sarah Silverman, and Ray Romano, among others, adds more of a zing than the common trope normally does thanks to a specific "King of Comedy" tone that the movie maintains over the first two acts. 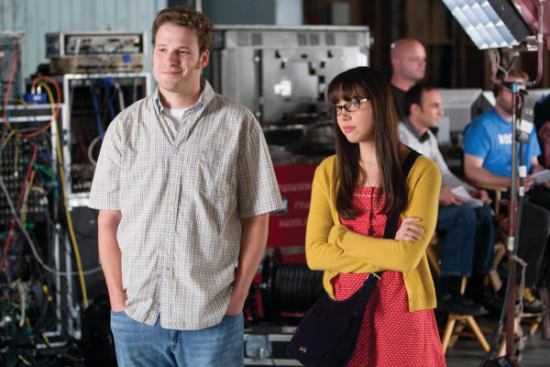 The movie gets into some trouble in the third act when George and Ira go to San Francisco to perform at an industrial function where James Taylor is also on the bill. George has rekindled a thread of romance with his old flame Laura, now unhappily married to Clarke, a hunky Australian traveling salesman (played for laughs by Eric Bana), and plans to visit Laura at her Marin County home while hubby is away. The not-so-innocent visit takes a turn for the worse when Clarke returns home unexpectedly just as Laura and George are making plans to get back together. 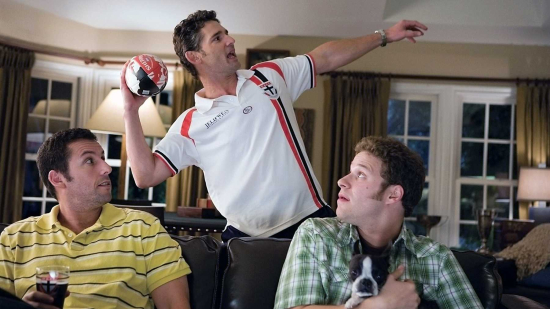 Sub-plot sequences involving Laura's daughters (played by the director's own girls Iris and Maude Apatow) take up too much time and burden the story with an otherwise nonexistent element of sentimentality. You can't blame Judd Apatow for being blind to the obstacle that using his own children brings to the movie, but it's the kind of mistake than an editor should have been able to address. Nonetheless, the plot takes a couple of late hairpin twists that brings the comedy to a satisfying close by staying true to the film's fascination with humor as a free human resource that everyday people use to communicate in colorful ways.

"Funny People" is worth the price of admission just to see the opening sequence homemade videos of Adam Sandler making prank phone calls when he and Judd Apatow were young unknown comics. Anybody can be a funny person.