Taste the Fury
Mexpliotation Comes to Town
By Cole Smithey 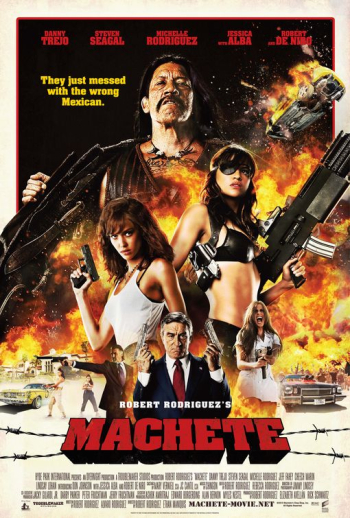 Robert Rodriguez's co-directed grindhouse fun-fest "Machete" is loaded with laughs, gore, and sly '70s-styled social commentary about America's current immigration crack-down. Rodriguez has coined the phrase "Mexpliotation" to describe his ironic reversal on vigilante films, such as "Dirty Harry" and "Death Wish," that were considered by some at the time of their release to represent a fascistic rightwing mentality. 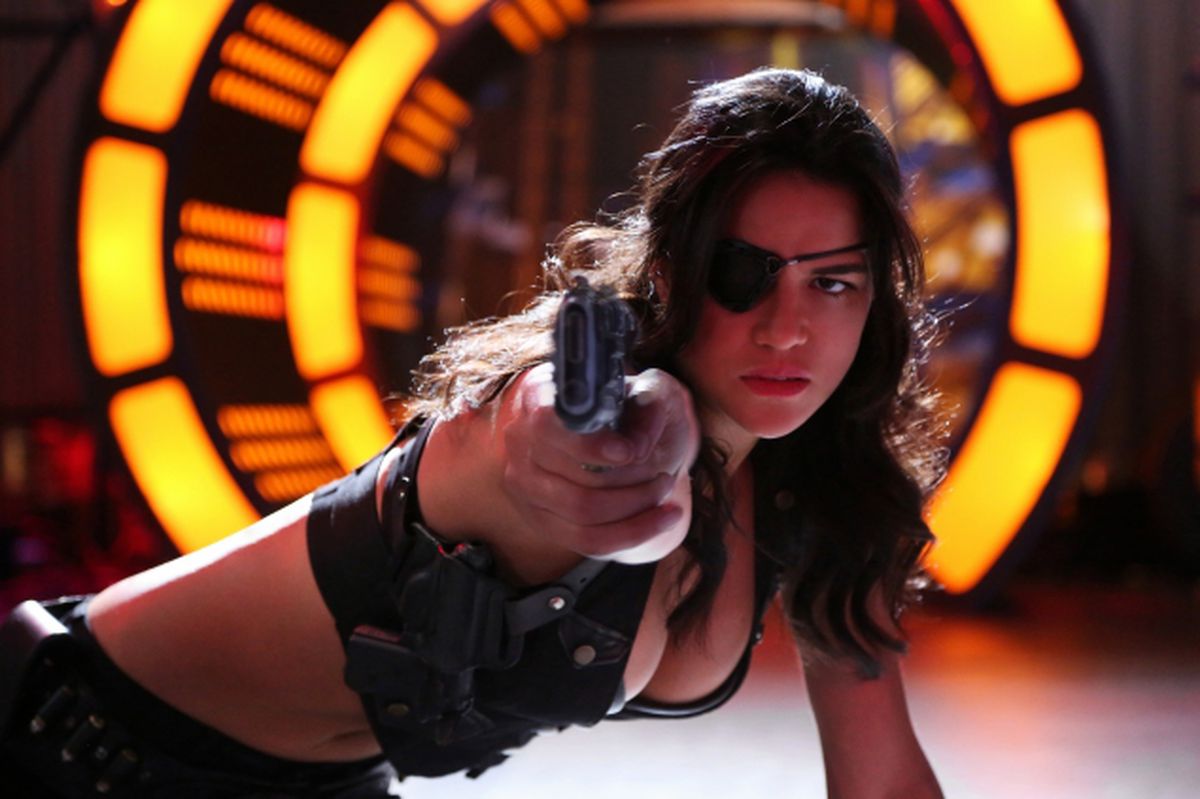 Extrapolated from the faux movie trailer Rodriguez created for the Quentin Tarantino-partnered "Grindhouse," "Machete" follows former Mexican Federale Machete (played with gusto by Danny Trejo), whose wife was brutally murdered before his eyes when he worked as an agent, by a vicious drug lord played by Steven Segal. 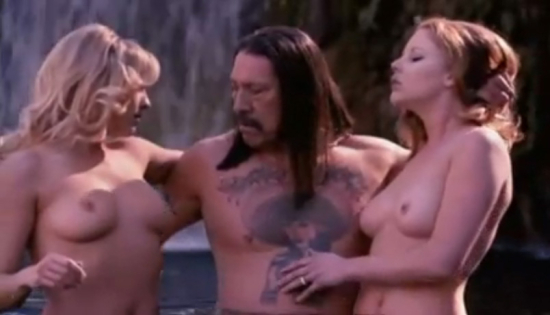 While looking for day labor work a few years later in Texas, the illegal immigrant Machete is propositioned by Booth (Jeff Fahey), a wily local millionaire, to assassinate Austin Senator John McLaughlin (Robert De Niro) during an election rally in exchange for $150,000. In his off-hours, McLaughlin has a penchant for videotaping himself riding around with his redneck border patrol buddy Lieutenant Stillman (Don Johnson) to mercilessly shoot Mexican immigrants attempting to cross the border. Needless to say, Machete soon becomes public enemy numero uno, and wages a one-man war against the bigoted powers that oppress and kill his people. You can easily guess at his weapon of choice. 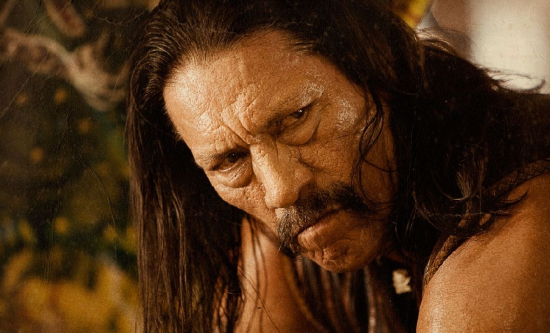 As hilarious as "Machete" is, and it is an especially uproarious movie, it's funnier still that there's an internet buzz about the film's potential to set off a race war in places like Texas or Arizona. Evidently, the film's tagline, "If you're going to hire Machete to kill the bad guy, you better make damn sure the bad guy isn't you!" has struck a nerve. It can't go unmentioned that "Machete" is a 20th Century Fox film, so its paradoxical proximity to Fox News is exceptionally amusing. 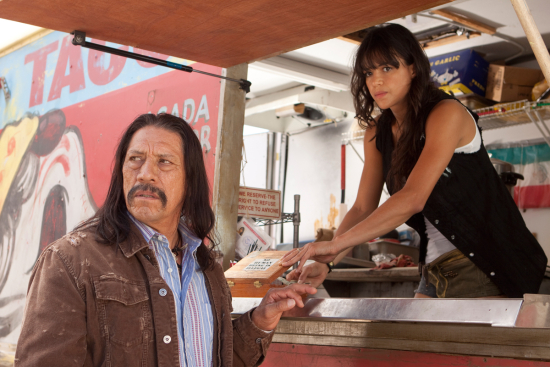 The genius of the picture is that Rodriguez has found a way to hitch the film's thematic wagon to a real issue in the same way that B-movies of the '60s and '70s did for their subjects. It's fascinating to see the grindhouse visual and narrative dialectic retrofitted with such energy and attentiveness to detail. There's a looseness to the hyperbolic way violence occurs that sets the tone for the corruption that underlies all aspects of border life. It's a given that all politicians and corporate figures on both sides of the perimeter are in bed with one another. For his part, Danny Trejo is so unattractive that, like "Have Gun - Will Travel's" Richard Boone (on television 1957-1963), he's positively perfect. 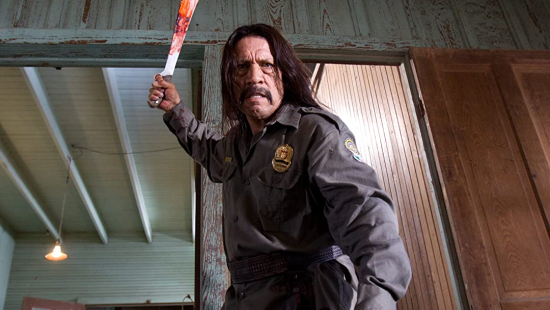 Jumping in the sack with Michelle Rodriguez's revolutionary leader Luz, comes across as a match made in cult movie heaven. Soul-kisses with Jessica Alba's smokin' hot U.S. Immigration and Customs Enforcement agent Sartana drives home the message that Machete is a superhuman rebel who exists so far beyond the law that such a romantic union is inevitable. Obligatory nudity also comes with the territory as Machete proves he's just as much a lover as a fighter when he frolics with Booth's naughty wife and daughter (Lindsay Lohan). 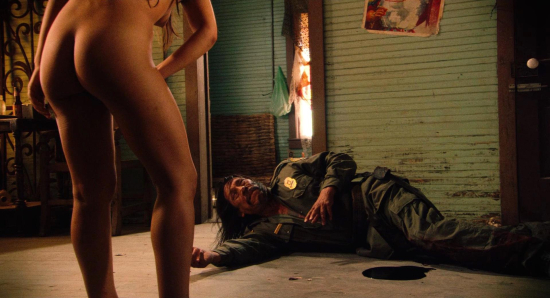 "Machete" comes closer to "House of the Devil" as a retro-homage picture than a throwback action film like "The Expendables." Jagged quick edits and cracked film stock lend an intentional feel of disintegration. An apocalyptic impression of social collapse lingers over the movie like the smell of butane lighter fluid in a freshly filled Zippo lighter. 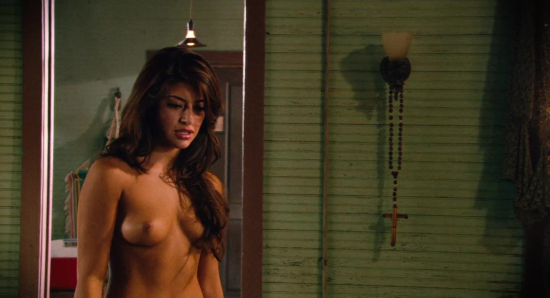 Blaxploitation films of the '70s like "Shaft," or the lesser-seen but more incendiary "The Spook Who Sat By the Door," served an important function of giving minority audiences an outlet for their day-to-day problems. Clearly, the time is ripe for Mexican audiences to have flaws in the American immigration system put on the big screen in an explosive and funny way. An NRA member would say, "Guns don't kill people; people kill people." 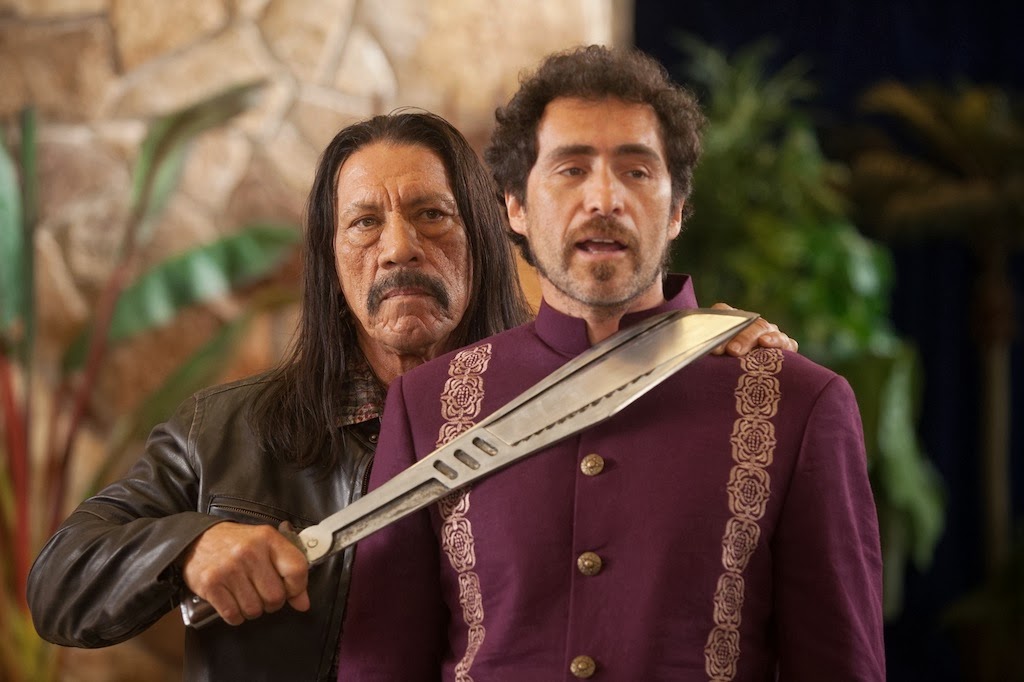 In the case of Machete, his very name is the blade that decapitates an entire system of calculated prejudice. There's a defiant expressiveness here that is easily more sophisticated than any argument a news pundit could articulate about America's confusion over immigration. Machete doesn't need no stinking card to prove his citizenship, and neither does anyone else. You can taste the fury.