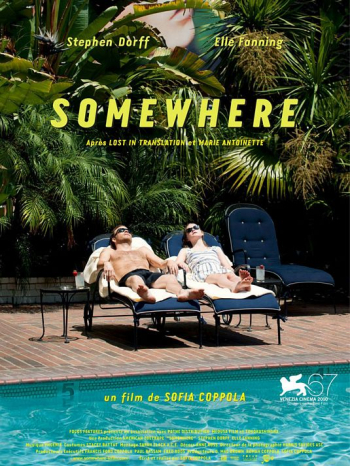 The awful ennui suffered by spoiled Hollywood stars is the pathetic subject matter for Sofia Coppola's crushingly dull anti-plot drama. Stephen Dorff's bratty Hollywood star Johnny Marco sulks around L.A. in his black Ferrari coupe. This is when he isn't paying for the same pair of pole-dancer twins who set up shop in Johnny's various hotel rooms. He likes to stay at the Chateau Marmont and drink champagne. Nothing much happens. Johnny takes care of his daughter Cleo (Elle Fanning) while his estranged wife checks out indefinitely. Johnny and Cleo bond over things like laying in the sun on their plush hotel's poolside deck. Excruciatingly dull and narcissistic, "Somewhere" is a suspect milieu satire that favors enforced glamour over narrative complexity. This is one of the worst films of 2010. It's so unpleasant that it makes Casey Affleck's Joaquin Phoenix disaster mockumentary "I'm Still Here" seem interesting by comparison. "Somewhere" is an embarrassment to everyone involved, not least of all its unsuspecting audience. 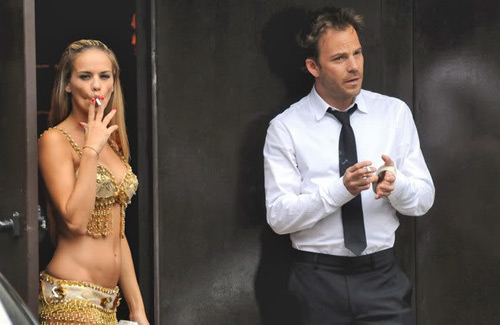 "Somewhere" is an art film without rigor. That "Somewhere" won the Berlin Film Festival, and has been praised by high profile critics such as Roger Ebert and Tony Scott, only spells career disaster for Sophia Coppola. She's been rewarded when she should be punished. Since starting strong with her first film "The Virgin Suicides," and getting very lucky with "Lost In Translation," Coppola took a hard left turn with "Marie Antoinette" under the defense, "You're considered superficial and silly if you are interested in fashion, but I think you can be substantial and still be interested in frivolity." Mercilessly ridiculed by French critics at Cannes when her puke-inducing confection screened, Coppola seems to have resigned herself to making an hermetic film that is as apolitical and insubstantial imagine. 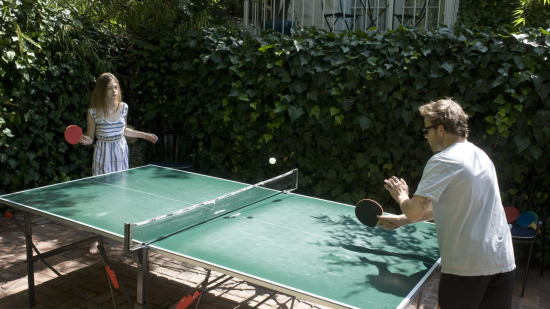 There is a corollary of ego between Joaquin Pheonix and Stephen Dorff's character in "Somewhere." Both are media products who disdain their chosen profession to a point of making a mockery of their personal lives. If there's a hook to hang any sense of emotional outlet on in "Somewhere" it comes from Johnny Marco's encounters with the matching pole dancers he contracts to ostensibly release his heavy load of daily oppression.

Forget that the folding "poles" that the girls bring with them  to Johnny's hotel room are fake--no such product exists that would support their weight as they swing around like circus performers. This is pure cinematic illusion. But to what end? There's some shallow pleasure to be taken in the hours of practice the twins must have endured to achieve such synchronized pole-dance moves. However, it's a performance out of context. As Johnny's chosen fetish, the pole-dance thing is so tame it could pass muster in an Archie comic book. 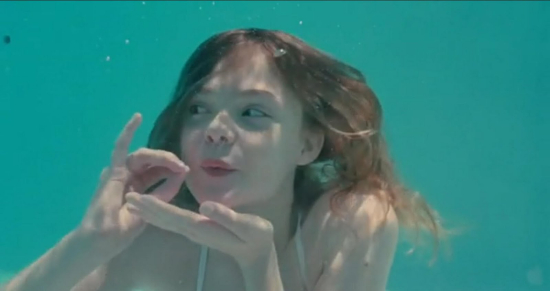 The relationship between Johnny and his precocious daughter is equally artificial, but comes with a similar caveat of poorly feigned mockery. At a time in America when its real unemployment numbers are at "22%" ("24.9" was the figure during the Great Depression), Sofia Coppola's idea of escapism involves inarticulate spoiled characters hiding out in ritzy hotel rooms with an in-room swimming pool. The only lessons Johnny teaches Cleo involve the proper condescending attitude with which to wear her sunglasses or how dark her tan should be. And yet "Somewhere" is too shallow to be even mildly insulting. That Sophia Coppola's name can even be mentioned in the same breath as rigorous filmmakers such as Mike Leigh is where the real insult lies. As for what loving up such cinematic tripe says about the respected critics that encourage it, I'll let you be the judge of that.