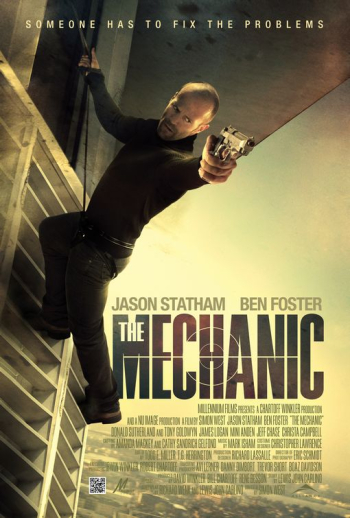 Simon West (director of "Con Air" and "The General's Daughter") has been off the big screen radar long enough to properly contemplate the slick little cinematic take-over that is "The Mechanic." The film's generic poster of a handgun made up of roughly sketched weapons cleverly conceals an ingenious update on the time honored assassin-with-a-heart genre. The film is an update of Michael Winner's 1972 original, which starred Charles Bronson and Jan Michael Vincent. Jason Statham plays ace hit man Arthur Bishop. Arthur lives in a well appointed house on a remote New Orleans waterway when he isn't executing high paid hits for an oily corporate bigwig named Dean (Tony Goldwyn). Arthur isn't just good at what he does, he's a "machine." We know this from watching the way Arthur invisibly dispatches the film's first victim in a heavily guarded indoor swimming pool where he drowns the home's owner. In black scuba gear, Arthur animates the fresh corpse as if the man were still swimming so as not to attract attention to the dastardly deed he has just performed. The guards are watching but they don't suspect a thing.

It's a treat to see Donald Sutherland come into frame as Arthur's ally and former mentor Harry McKenna. Sutherland bites into his wheelchair-bound character like he's enjoying the best meal of his life. His vibrancy as an actor remains undiminished. A Rubik's cube plot scheme puts an onus on Arthur to extend some assistance to Harry's troublesome son Steve (played with fierce intensity by the always-invested Ben Foster). Steve is a temperamental brat but he has potential as a contract killer, with suitable guidance from Arthur. The trouble is that Steve doesn't always follow directions as closely as he should. Such inattention to detail leads Steve to the home of his first victim, a towering brute who weighs twice as much as the diminutive Steve. What follows is a vicious and yet humorous mano y mano fight scene. It's a pure thrill. As much as it seems that Steve bites off much more than he can chew, he's a tactical fighter who uses everything at his disposal. The knock-down-drag-out fight sequence is worth the film's price of admission alone.

With Arthur and Steve teamed up as tutor and pupil, the story takes an inevitable direction that proves to be still full of surprises. The filmmakers blend spectacle with vengeful intention like Van Gogh mixing colors. The stunt coordinators really make the stunt men work for their money. You want super-action? You've got it. When the action shifts to a high-rise building in Chicago, there's barely a moment to catch your breath.

Jason Statham got his start with Guy Ritchie's "Lock, Stock and Two Smoking Barrels." It enabled Statham to maintain a fairly high level of quality action movies that includes Luc Besson's "Transporter" franchise. Time has been kind to the able-bodied action star whose chiseled physique carries the credibility of stunts that he clearly does himself.

"Victory loves preparation" is the inscription on Harry McKenna's polished steel handgun. It might sound like an obvious principle to build a hit man action movie around, but it works like a charm here. "The Mechanic" is a modern grindhouse picture that elevates the genre because it allows its characters to exert the logic of their flaws. Even an elite assassin like Arthur Bishop can make mistakes. And even a loose cannon screw-up like Steve McKenna can become an effective killer. Anything you do, don't underestimate "The Mechanic." This is one badass movie.

Posted by Cole Smithey at 09:59:40 PM in Action/Adventure