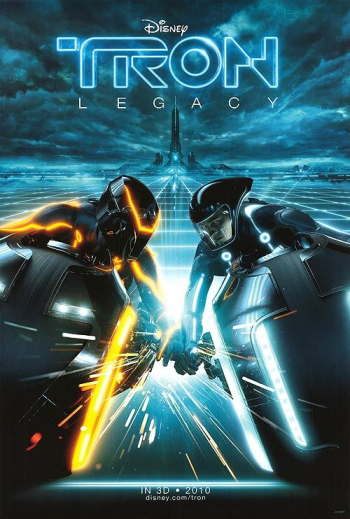 I was working at the Campus Drive-In in San Diego in 1982 when Steven Lisberger's "Tron" opened up the computer "game grid" to allow for what was then a fairly dazzling display of special effects. At the time I didn't so much care that the story was severely lacking because the visuals were so unlike anything I'd seen before. The drive-in's gigantic screen served as a great canvas for the spectacle to mask the film's narrative shortcomings. Steven Lisberger ("Slipstream"-1989) did not go on to enjoy a notable career. 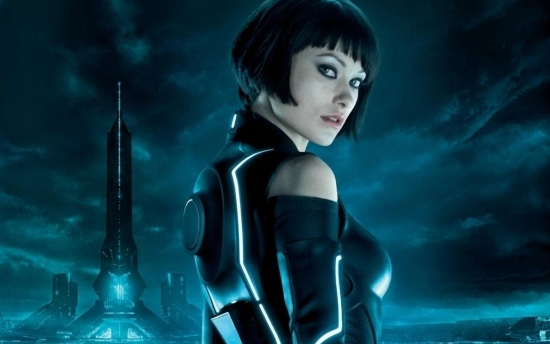 Nearly 30 years later audiences get a belated sequel that measures up to the original film inasmuch as it falls prey to the same priority of flash over substance. Enter Garrett Hedlund as 27-year-old Sam. He's the grown-up son of "Tron's" vanished hero Kevin Flynn (Jeff Bridges). Sam has a thing for riding his Ducati motorcycle at high speeds, especially if it involves escaping motorcycle cops. He lives a bare existence in a barely renovated garage under a freeway. .As primary share-holder in his dad's company ENCOM (think ENRON) Sam is finally coming around to the idea of taking some responsibility for the company's less than ethical business practices. Cut to Sam popping up inside the game grid where he survives a few rounds of death Frisbee before getting into a high-tech motorcycle game more suited to his testosterone-juiced skills. The beautifully designed cycles can collapse into a handheld bar of metal for portability. The race is the film's centerpiece. With better explanation about the rules of the game the audience might be better able to size up the action. Rounded walls and drop-through floors keep things interesting, but we don't really know how to judge the event.

Sam meets up with dad. Jeff Bridges's Kevin Flynn comes across as a Lebowski-inspired hippie who likes to call his son "man" and drop references to his "Zen" philosophy when he isn't waxing philosophical about "radical biodigital jazz." But Kevin is trapped inside the grid by CLU, an alter-ego evil twin he created who now rules the roost as a ruthless fascist dictator. For a prisoner in a system that grew beyond his control Flynn is a well-adjusted slacker. He doesn't seem to do much. Flynn is like a lazy rich person living within a gated community in a third-world country. He has what he needs so why bother with the rest of the world. 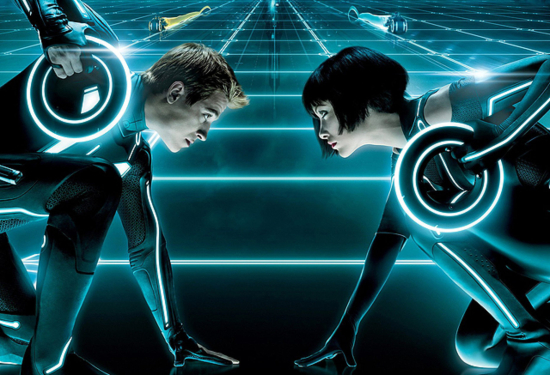 Michael Sheen injects some rock star theatrics ala David Bowie's "thin white duke" as a white-haired party maestro named Zeus. As one of CLU's loyal subjects Zeus is not a trustworthy fellow. A ticking-clock plot device means that Sam has just eight-hours to extract his dad from the grid and return home. Help from a super sexy Olivia Wilde as machine-girl Quorra promises to advance Sam's escape plan if only they can foil the do-it-all-villain CLU. Here again, character development is zero, but the up-for-anything Quorra exudes a warm fuzzy feeling that belies her artificial nature. 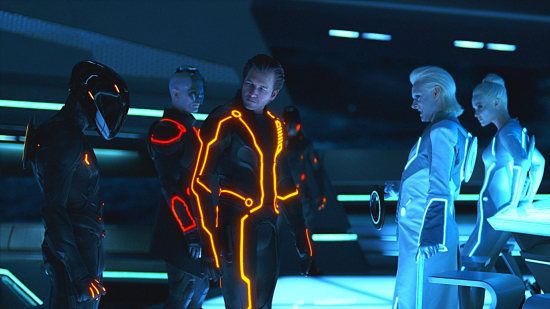 The filmmakers have gone to a lot of trouble to render out via CGI a youthful-looking version of Jeff Bridges as CLU. But it's a wasted effort. The character looks like a mannequin. As a figurehead of evil CLU is too sterile to make much of an impression. There's something off about the technology that makes the artificial character seem like some form of advanced robot that would turn to mush if someone kicked him in his circuit board. It's a missed opportunity that there's no mano y mano showdown between Flynn and his younger seeming twin. And since CLU never professes much in the way of character defining ideas, we're left to presume that he's mainly just not down with Flynn's "Zen" philosophy.

If you're young and easily impressed, then "Tron: Legacy" won't feel like a rip off. As for the film's non-window-breaking 3D effects, you'll be left to scratch your head about why the filmmakers even bothered.