« SOMETHING BORROWED | Main | MIDNIGHT IN PARIS »

PIRATES OF THE CARIBBEAN: ON STRANGER TIDES

Mermaids, Pirates, and Swords
Depp and Company Finally Get it Right
By Cole Smithey 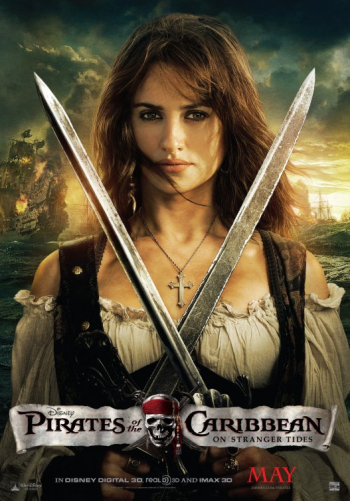 Having dropped the dead-weight of Orlando Bloom and his guilty-by-association co-star Keira Knightley, the fourth installment of the "Pirates" franchise has finally discovered a way to be coherent. Gone too are the ghoulish zombies that mucked up much of the past "Pirates" films.

Johnny Depp reprises his Captain Jack Sparrow role with a restrained polish that is a constant source of pleasure. The character has aged like a fine wine. When Depp's character-inspiration Keith Richards shows up in a featured cameo as Jack's old man Captain Teague, the audience gets a special treat. You could argue that Richards is just playing himself, but the fact is the man can act. The writers could have stood to slip Richards a few more scenes just for good measure.

As the director of sturdy movies like "Chicago" and "Memoirs of a Geisha," Rob Marshall is better suited than former helmer Gore Verbinski to carry off the adventure franchise's obligatory chase action set pieces and recurring sword fights. The first 15-minutes of the movie are set in 18th century London. The playful feeling is more akin to an "Indiana Jones" picture than the forced romance and creepy horror of Verbinski's overly busy kitchen sink efforts.

We first see Captain Jack from the back. He's disguised as a British judge busy hearing a case against a man believed by the rest of the court to be himself. The curly blonde wig Jack wears with little granny glasses does little to hide his trademark eyeliner that makes him resemble punk lord Stiv Bators.

Jack's planned escape from the courthouse lands him in the unexpected company of King George II (delightfully played by the ever reliable Richard Griffiths). The scenery chewing on display is especially enjoyable. Jack is rumored to have in his possession a map that points to the fabled fountain of youth. King George informs Jack there is a Jack Sparrow imposter roaming around London searching for men to run crew for an unknown expedition. Enter Jack's longtime rival Barbossa (Geoffrey Rush). Since we saw him last Barbossa has turned over a new leaf after losing a leg to work for King and country. Barbossa's peg-leg charge is to find the fountain of youth before the Spanish can beat the Brits, or any pirates, to the punch. 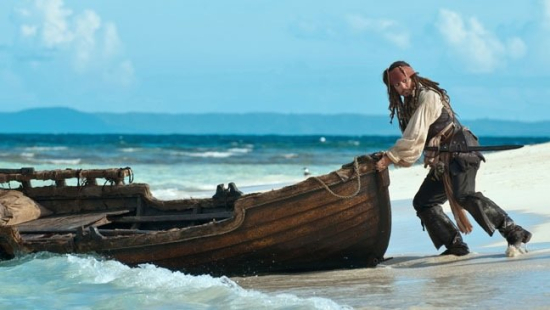 The serviceable Penélope Cruz plays Jack's former love interest Angelica. In the year's since Jack rescued her, Angelica has discovered Blackbeard (Ian McShane) to be her biological father--maybe. Cut to Angelica kidnapping Jack onto Blackbeard's ship so her old flame can lead them to the fountain of eternal life for the sake of her dying pirate papa.

Rob Marshall maintains formal camera compositions throughout to keep the audience in the story. Every lush shot, whether at sea or in a thick jungle, is referenced in medium and wide vantages. There's a grand scale to every mesmerizing location. Although the director doesn't do near as much as he could with the film's 3D effects, there are a few welcomed moments where swords break the fourth wall. The big trick the film has up its salty sleeve are its mermaids. An integral part of the plot involves the necessity of a mermaid's tear in order for water from the fountain of youth to have the desired effect. 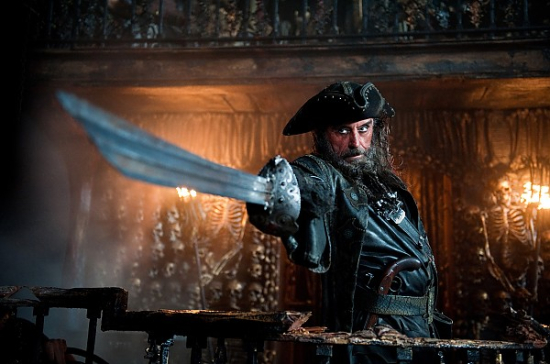 The rollicking tides the competing ships must cross are made "strange" by the presence of long-tailed mermaid sirens who are every bit as beautiful as they are treacherous. Their perfect teeth can transform into fangs at a moment's notice. The filmmakers do a nice job of maintaining the creatures' sensual topless allure with well-placed long hair that is a much costume as body part. Mermaids have never played such a significant role in an adventure film. Their exotic nature is contrasted with an element of horror that captures your imagination and toys with it as a cat would a mouse.  Astrid Berges-Frisbey steals scenes as Syrena, a mermaid captured for Blackbeard to extract a tear. A romantically inclined clergyman (Sam Claflin) falls especially hard for Syrena's unreliable charms. 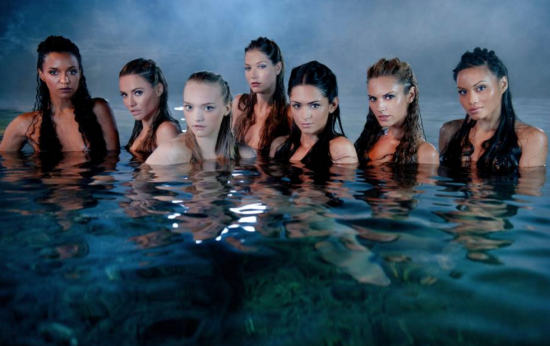 "Pirates of the Caribbean: On Stranger Tides" is far from being a perfect adventure movie. Although Ian McShane does a lot with the little he's given, we don't get a sense of who his Blackbeard really is. Penélope Cruz barely fulfills the demands of her role whereas a more interesting actress could have added much more humor and mystery. This is Johnny Depp's movie. He has embraced Jack Sparrow as a kind of alter ego and built on his own legacy. Depp is clearly having fun. And so are we.

Posted by Cole Smithey at 02:32:38 PM in Action/Adventure, Children's Cinema