For the first time in a long time Hollywood offers up an energetic adult romantic comedy that's equal parts substance and comic spice. A generational divide between old-fashioned romantic sensibilities and the cultured mechanics of modern dating tactics bubble up for deeply satisfying laughs.

Steve Carell's suburban family man Cal gets hit by a ton of bricks when his childhood-sweetheart wife Emily (Julianne Moore) asks for a divorce so she can pursue a relationship with her smarmy co-worker David Lindhagen (Kevin Bacon). The perfectly cast Steve Carell is a picture of middle aged male frumpiness. He wears his dirty New Balance tennis shoes as if they were a birthright. Carell uses everyday mannerisms to convey an abandoned dog attitude for his disheveled character. Cal needs to be adopted, and we as the audience want to help. 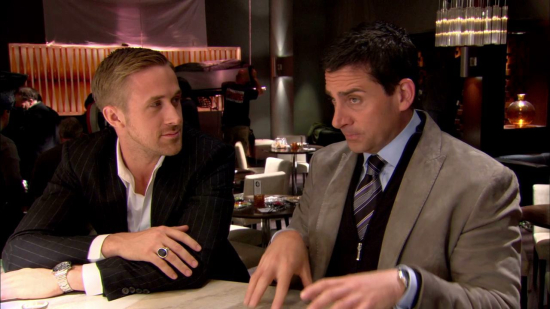 Cal's brain is stuck on a short loop connected directly to his mopey mouth about how his adulterous wife "slept with David Lindhagen." Every patron and bartender at Cal's newly regular watering hole knows his sad sack story all too well. The posh venue also serves as the frequent hunting ground for Ryan Gosling's Jacob to ply his well worn trade of catch-and-release fishing for a steady stream of "fancy face" females who fall for his polished game 99% of the time. Jacob responds to something in Cal's naive nature. He generously offers to tutor Cal in the fine art of cocksmanship at no charge. Still, the sensei/student lessons come with face-slaps and a head-to-toe make-over that liberally drains Cal's credit card for the "16 items" he needs to reinvent his wardrobe. The filmmakers stumble during a couple of poorly calculated nude scenes between Cal and Jacob that briefly expose the screenwriters more than they do their characters. 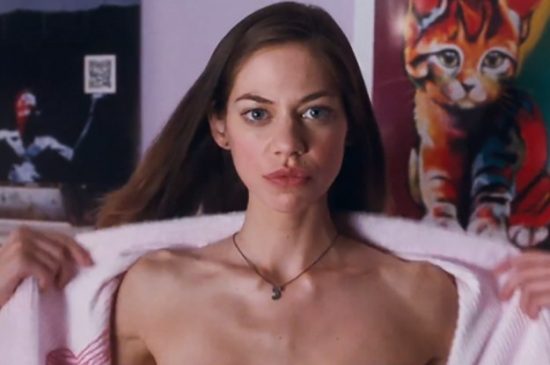 Little does Jacob realize he's fated to meet his match in the guise of a young redheaded woman named Hannah (Emma Stone). There's real fire in the onscreen chemistry between Gosling and Stone. Their scenes together anchor the film's emotional aspirations. "Crazy Stupid Love" is directed and filmed with such overall precision that when it slips under the heavy hand of commenting musical choices, such as a certain overused Talking Heads song, you can't help but groan at the cliché. There's also a little gear-grinding that occurs between the second and third act before the story finds it's escalating glide toward a family crisis of epic proportions. 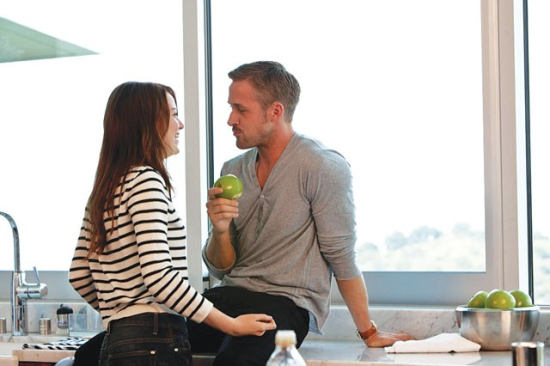 Ironically, the film's theme lines are carried by Cal's 13-year-old son Robbie (well played by Jonah Bobo). Robbie has a major crush on his 17-year-old babysitter Jessica (Analeigh Tipton), who is busy trying to get Cal's romantic attention. Robbie views Jessica as his soul mate. Nothing will dissuade him. Robbie's persistence of romantic vision knows no boundaries. By the end of the movie neither do we. Anything seems possible with the right amount of heart.