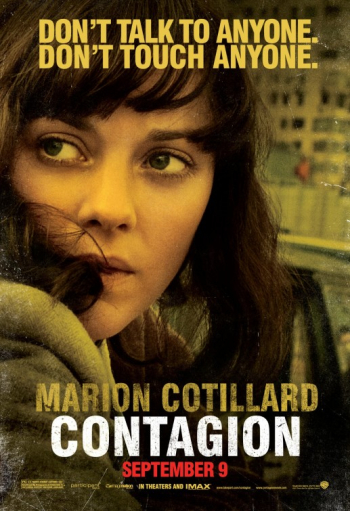 "Contagion's" PG-13 rating predicts the film's less than horrific nature (following an overpromising opening sequence). Director Steven Soderbergh inflects his beautifully photographed compositions with a slick techno pop score yet can't compensate for a script splintered into too many subplots.

Screenwriter Scott Z. Burns ("The Informant!") ignores fundamental rules about providing the audience with a clear protagonist. Laurence Fishburne, Matt Damon, Marion Cotillard, and Kate Winslet each play intriguing characters who could conceivably lead the story; sadly, all get lost in the shuffle. Kate Winslet's Dr. Erin Mears is excellent. However, her part is cut woefully short. Most damning is the film’s refusal to meditate upon the gruesome reality of a widespread global pandemic that leaves millions of rotting corpses in its wake. 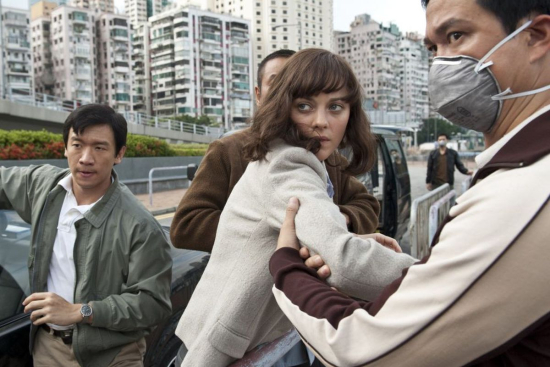 Hopscotching between the cities of Chicago, San Francisco, and Hong Kong, the fragmented movie follows the outbreak of a virus called MEV-1 like a felon attempting to avoid the scene of a crime. Jude Law's activist blogger Alan Krumwiede posts a homeopathic cure for the quick-spreading disease on his increasingly busy website. Family man Mitch Emhoff finds that he is immune to the virus after losing two family members to its insidious clutches. Damon's character is perhaps the film's most criminally squandered role, next to a blink-and-you'll-miss-it performance from the enormously talented Elliot Gould. Gould graciously fills a minor role as a research scientist whose subplot gets abandoned more so than every other. 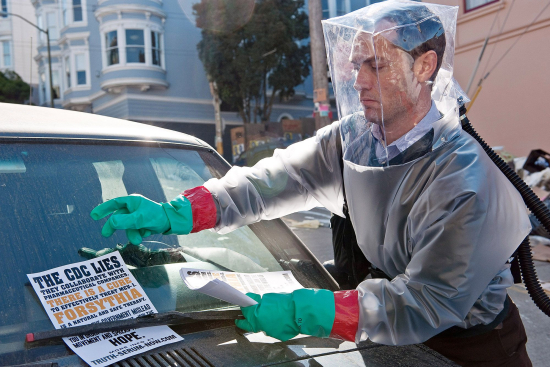 “Contagion” does have its moments, however few and far between they are. An especially dramatic death and subsequent scalp-slicing autopsy bring the movie to a proper pitch of cringe-worthy fear. Another episode involving an infected man coughing and touching handrails on a public bus elicits the level of revulsion mass transit riders experience on a daily basis. 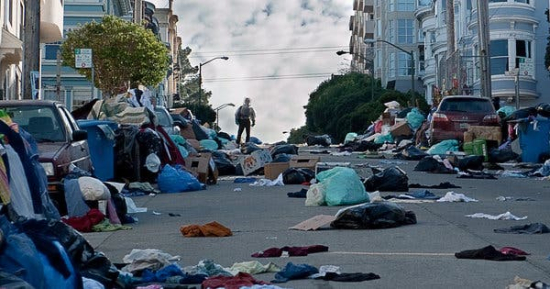 If there’s a stand-out moment in the movie it comes during a televised interview with Laurence Fishburne’s head of the U.S. Centers for Disease Control and Prevention, Dr. Ellis Cheever, and Jude Law’s dentally-challenged blogger. Law’s Krumwiede performs the kind of catty public take-down on Dr. Cheever that Bill O’Reilly gets wet dreams about carrying out against his guests. Irony comes later when Krumwiede’s own missteps catch up with him. Still, the screenwriter draws Law’s blogger character with such cartoonish brushstrokes that he borders on the comical. When Elliot Gould describes blogging as “graffiti with punctuation,” you have to chuckle at the screenwriter’s ham-fisted attempt at editorializing. There’s a certain kitchen-sink thing going on. Witness the stupefying miscasting of comedian Demetri Martin in a supporting role as a lab assistant trusted with handling the MEV-1 virus. Talk about sapping credibility from your movie. Soderbergh did a doozy with this one. 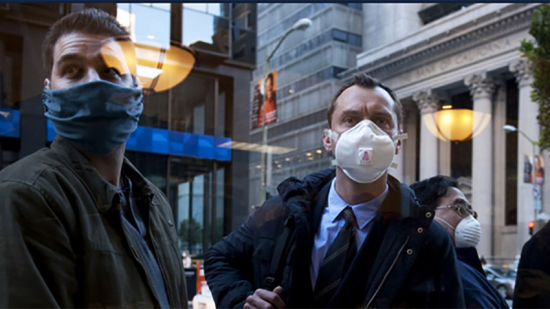 “Contagion” is an odd film for its vast supply of untapped potential. It’s surprising that a seasoned filmmaker like Steven Soderbergh would choose to work with such a poorly realized script. The ensemble performances are strong, and the film’s atmosphere is appropriately glum, but there’s nothing here to make you feel like you’ve had a meaningful cinematic experience. What a waste.

Posted by Cole Smithey at 02:15:23 PM in Political Thriller, Thiller