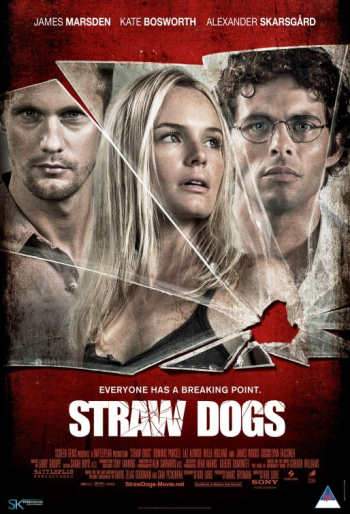 “When in Rome, [do as the Romans do.]” James Marsdan’s clueless screenwriter character David Sumner uses the age-old adage to rationalize how he should interact with snotty Southern hicks in his wife Amy’s hometown of Blackwater, Mississippi. Kate Bosworth plays Amy a blonde sexpot whose military father recently passed away, leaving behind the stone family mansion that withstood the ravages of Hurricane Katrina. The adjacent farmhouse however didn’t fair so well. David makes the mistake of hiring Amy’s ex-boyfriend—and former high school football hero—Charlie (Alexander Skarsgard) to repair the farmhouse roof with the help of his less mannered construction crew of prototype hillbillies. Nothing good can follow for David because he lets his ego get in the way of common sense. 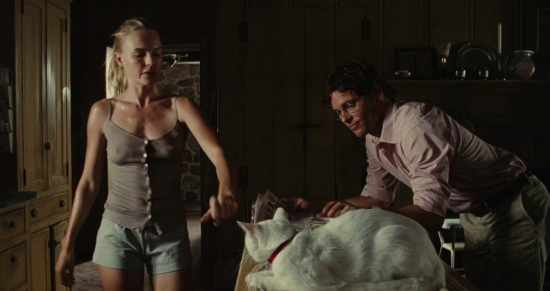 The only reason a filmmaker should ever attempt remake to make a film is to improve on the original. David Cronenberg performed just such a feat with his version of “The Fly.” Co-writer/director Rod Lurie isn’t as fortunate, even if his revision of Sam Peckinpah’s 1971 film does allude to modern America as a combination of passive aggressive martyrs and bloodthirsty bullies. Lurie and his two screenwriters stick surprisingly close to the original film’s storyline. The murder of a family cat sets the narrative gravity of snowballing violence into play. 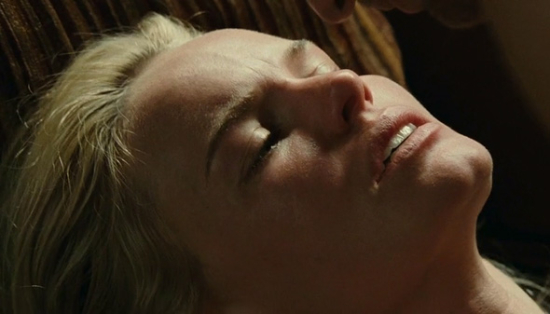 As in Peckinpah’s film, Amy is as much to blame for the chaos that befalls her and her nerdy — read impotent — husband as are the religious right assholes that terrorize the wealthy couple. Amy is a hometown girl who went on to great success as a television actress in Hollywood. She enjoys taunting her ex-boyfriend Charlie and his beer-swilling buddies with her exposed breasts. Lurie doesn’t go as far as Peckinpah did in disclosing the excruciating details of Amy’s rape at the hands of Charlie and one of his crusty crew. Still, a question hangs over the film about how much of the brutal episode Amy designed herself from a long-held fantasy. The event is not, as Pauline Kael noted of Peckingpah’s film “a male fantasy;” the rape is Amy’s super-objective that allows her to label herself and her husband as “cowards.” She is the fly in the ointment.

The central theme comes down to David defending “his house.” For as much as David has been grandfathered into the region via his native wife, he is nonetheless an interloper whose spouse throws him to the local wolves that she relates to better than she admits. Possession may represent “nine tenths of the law,” but legal constraints can be illusive and fleeting. 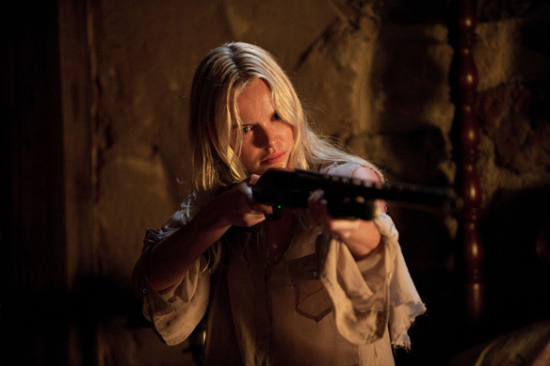 The filmmakers substitute Blackwater, Mississippi for Peckinpah’s Cornwall, England. It’s no coincidence that “Blackwater” is the name of the notorious private military security firm that broke every law in the book in Iraq—so much so that the company changed its name to Xe (pronounced zee). John Burke (Laz Alonzo), a black local Iraq war hero, is the town sheriff but he is as ineffective as Amy’s deceased military father in protecting anyone. The former soldier is a “straw dog” set up for the sole purpose of being knocked down by private — read radical — political forces. Peckingpah’s original film is consequently positioned as a straw dog for Lurie’s version. The trouble is that Peckinpah’s movie is better.