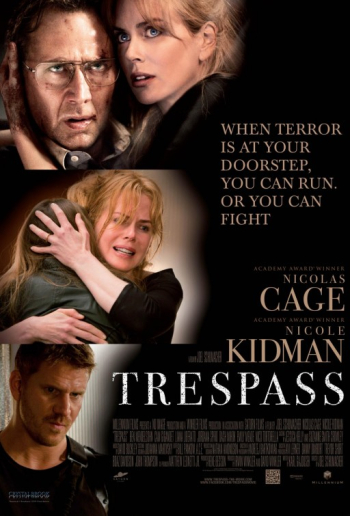 Joel Schumacher continues on his career-long habit of hits and misses with a home invasion suspense thriller that signifies yet another dip. Knowing that the filmmaker responsible for such cinematic achievements as "Falling Down" and "Tigerland" also spat out the ill-conceived "8MM," and the truly awful "The Number 23," allows you to set your expectations appropriately. Kyle Miller (Nicolas Cage) is a diamond seller living with his trophy wife Sarah (Nicole Kidman) and their socially active teenage daughter Avery (played by the ever-captivating Liana Liberato) in their gated mansion. This family isn’t just wealthy; they’re filthy rich. Given America's ongoing economic depression, the outrageous affluence on display seems to point toward some degree of social satire. Sadly, no such commentary is available. If anything, the film tips toward a vague ideology of radical right-wing survivalist mentality. 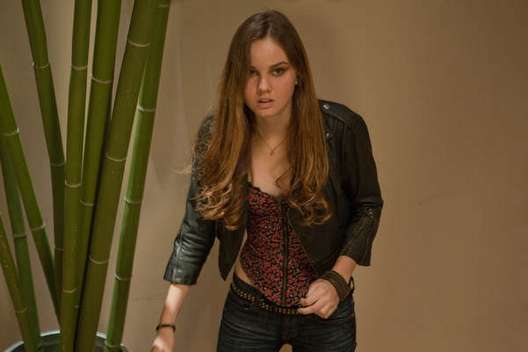 Screenwriter Karl Gajdusek goes so far with his kitchen-sink approach to leveraging suspense with laughable plot devices, fake-outs, and goofy dialogue that the film starts to sag long before its third-act escalation toward a climax that nevertheless holds at least one mild surprise.

Kyle wheels-and-deals on the phone while steering his Porsche into the gate of his remote suburban family home. Cage plays his unattractive character with all the sliminess he can muster. Designed by Sarah, the house is a study in outsized modernist minimalism. It comes equipped with a complex security system manned by a 24-hour company. There’s marital tension between the spouses. Kyle is a secretive guy. Avery is in a rebellious snit about not being allowed to go to a party with her ostensibly slutty best friend. Needless to say, our elitist family doesn’t win much audience empathy sequestered in their mansion bunker. 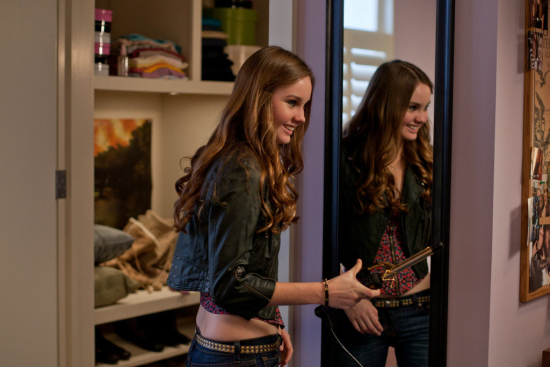 Avery exerts her right to freedom by sneaking out of her domestic prison and climbing the home’s high surrounding fence. Her friend-of-ill-repute picks Avery up beside the road and promptly nearly kills them on a dangerous curve planted by the screenwriter as a piece of underwhelming foreshadowing. The party proves to be a staging area for its teen-boy host to seduce Avery with copious amounts of cocaine in a walk-in closet packed with ostentatious amounts of cash. Avery is unimpressed. She at least represents the film’s singularly likable character. 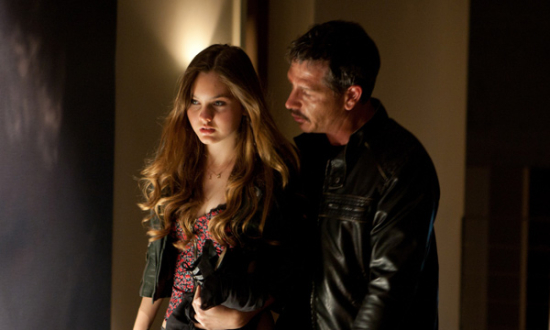 For a man obsessed with security, Kyle falls for the ole cop-impersonation ploy pretty easily. Our pack of cash-hungry masked thugs are laden with enough back-story to fill up their own B-movie. Team-leader Elias (Ben Mendelsohn) knows about Kyle’s wall safe. Much time is spent intimidating Kyle to open a box whose contents aren’t exactly what the thieves expected to find. Kyle sweats profusely but keeps a poker face as he stalls for time in circular negotiations that enable flashbacks about the intruders. There’s a possibility that Sarah not only knows one of the crooks, but she may be carrying on an adulterous affair with him. 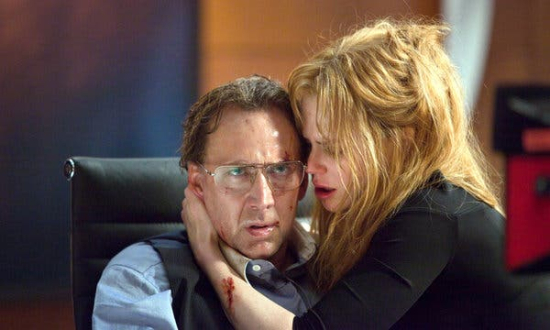 Casting the ever-artificial Nicolas Cage and the always glacial Nicole Kidman as its protagonists has a distancing effect. There’s a bland disconnect between the band of dim-witted thugs, that naturally include a drugged-out girl, and a rich family whose lifestyle relies on how well they can buffer themselves from the outside world. As a par-for-the-course suspense thriller “Trespass” is a marginal addition to an often hackneyed genre. As an audience you could do worse, but you could also do much better.