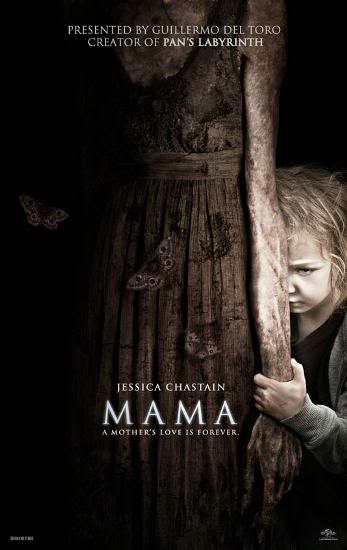 Guillermo del Toro — the director of such minor masterpieces as “The Devil’s Backbone” and “Pan’s Labyrinth” — weakens his sphere of influence by producing a sorely underdeveloped horror movie that manufactures scares from the crudest of tropes. Sound effect shocks produce most of the film’s artificial jolts of fright. Del Toro endorses newcomer co-writer/director Andrés Muschietti’s efforts to engender audience gasps from a soulless computer-generated monster that make’s the Hulk look lifelike by comparison.
The set-up is topical. A suburban father of two little girls returns home after murdering his two business partners. A bullet for wifey sends the crazed man driving like a maniac on icy roads with his kidnapped daughters pleading for mercy from the back seat. The film’s money-sequence comes when the car spins out of control, eventually sending it off the side of a snowy cliff into a steep ravine. The cinematography on display is exceptional. The film never again hits such a heart-pounding crescendo.

Still able to walk, daddy carries his youngest girl Lilly (Isabelle Nelisse) deep into the woods. His older daughter Victoria (Megan Charpentier) follows them into a disused cabin where some one or some spooky thing lurks. Once inside the remote residence, the man makes a fire in the fireplace using a freshly broken chair for firewood. We can sense what’s coming next. In his hand he holds the pistol he has used to ruin his life. He doesn’t know that he shares the space with a witchlike exterminating angel with wall crawling abilities. She is Mama. She will rescue the girls and raise them as her own.

Cut to several years later. The homicidal man’s brother Lucas (Nikolaj Coster-Walldau) has kept up a vigil to locate his nieces. Suspension of disbelief becomes harder to sustain. How could the girls have gone missing for so long? Wouldn’t the authorities have sent out search teams during the crisis? Here’s the kicker. The monster-raised girls crawl and jump around like spiders on acid. Their verbal skills are minimal.

Lucas and his Goth rock bass-playing girlfriend Annabel (played by an unrecognizable Jessica Chastain in dyed hair and heavy eyeliner) battle for custody in spite of the fact that neither seems to possess much maternal or paternal instinct. They live in a glorified man cave. Musical gear and big rusty signs adorn their bedroom. Lucas’s nasty sister seems better suited to take on the challenge of adapting the wild children to the demands of civilized behavior. However, a ghost-in-the-machine plot device arrives via clinical psychologist Dr. Dreyfuss (Daniel Kash), who offers up a research-provided suburban house where the young couple can raise the girls under his supervision. The green-skinned, alien-faced Mama follows the girls to their new residence to set up shop. Her insect-mind intentions are unclear.

Although the story is set in Richmond, Virginia, the movie never gives so much as a glimpse of that historic town’s iconic personality. The filmmakers could have at least taken a spin down Monument Avenue for crying out loud. A conscious lack of narrative distinction permeates every aspect of the story. Clunky desaturated flashback sequences attempt to tell Mama’s tale of persecution that led her to jump from a cliff while holding onto her infant child. Any empathy the audience might share with the jealous creature is blunted by its grotesque appearance and penchant for unwarranted violence against whosoever comes near the girls.

At best, “Mama” is a subpar PG-rated monster movie. At worst, it represents a desperate grasp for relevance by a once-inspired filmmaker [Guillermo del Toro] relegated to producing entry-level films for far less talented auteurs.

Listed below are links to weblogs that reference MAMA: