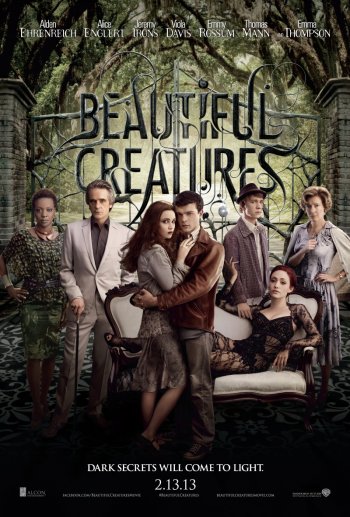 An imaginative adolescent gothic romance, “Beautiful Creatures” arrives with considerably more camp and intellectual humor than the “Twilight” franchise to which “Creatures” is sure to be compared. Emma Thompson and Jeremy Irons trade off scenery-chewing scenes that are worth the price of admission. Thompson — playing an undead spirit inhabiting the body of another woman — especially lets rip with a full-throated Southern accent on the unforgettable line, “Well, slap my ass and call me Sally.” Delightful. Alden Ehrenreich (“Tetro” - 2009) delivers an eye-opening performance as the story’s quietly rebellious Southern-boy protagonist Ethan Wate. Thankfully, Ethan’s voice-over narration is kept to a minimum.

The theme conveys a current retro-zeitgeist in cinema, celebrating the Beat Generation and literary culture of the ‘50s and ‘60s. Ethan Wate is an outlier consumed with reading banned books. Kurt Vonegut’s “Slaughterhouse-Five” is a favorite. “Catcher in the Rye” and “On the Road” are other forbidden novels that Ethan uses as an autodidact plotting his escape from the oppressive [fictitious] Southern town of Gatlin, South Carolina. We get a sense of why such books are banned in the South where free thought is not encouraged. Ethan may carry the accent and false-politeness of Southern indoctrination, but he sees right through the charade. He makes for an empathetic protagonist because he’s smart enough to know he has a lot to learn that he won’t learn living in Gatlin.

As the story opens, it’s revealed that Ethan recently broke up with an attractive but typically brainwashed local girl whose worldview reflects the annual Civil War reenactment the community carries out every year. Talk about exercises in futility; the town of Gatlin has them covered. Cue the kindred soul of an outcast new girl at school, the “gifted” Lena Duchannes (Alice Englert) whose wealthy father Macon Ravenwood (Jeremy Irons) has returned to the area to ostensibly further his daughter’s education. Lena has dark powers that attract the openhearted Ethan like a moth to the flame. She’s trouble.

Suspense is built around the 15-year-old Lena’s upcoming 16th birthday whereupon the pale-skinned Goth girl will discover her dark or light association to a family curse that could turn her into dark witch when she reaches the age of consent in South Carolina. The implication of the subtext here is that Lena could turn into an insatiable harlot capable of leaving a sticky trail of broken hearts but satisfied libidos. The arrival of Lena’s girl-gone-bad cousin Ridley Duchannes (Emmy Rossum) provides a glimpse of where Lena could be headed. Low cut transparent black gowns; heavy eye makeup, dark sunglasses, and a candy-apple-red convertible could be in the offing for Lena. Lust is clearly on the minds of Lena and Ethan who carry on with a kissing-only routine endorsed by Southern protocol. If there’s any heavy petting going on, we don’t see it.

Under Richard LaGravenese’s direction “Beautiful Creatures” manages to dodge clichés of the genre while nevertheless celebrating teen romance with sincerity and a well-earned sense of perspective. It may not be a reinvention of the Gothic-teen-soap-opera model that is paying much of Hollywood’s bills these days, but it does play its romantically aspirational cards with care.

Posted by Cole Smithey at 01:51:59 PM in Teen Romance Fantasy

Listed below are links to weblogs that reference BEAUTIFUL CREATURES: